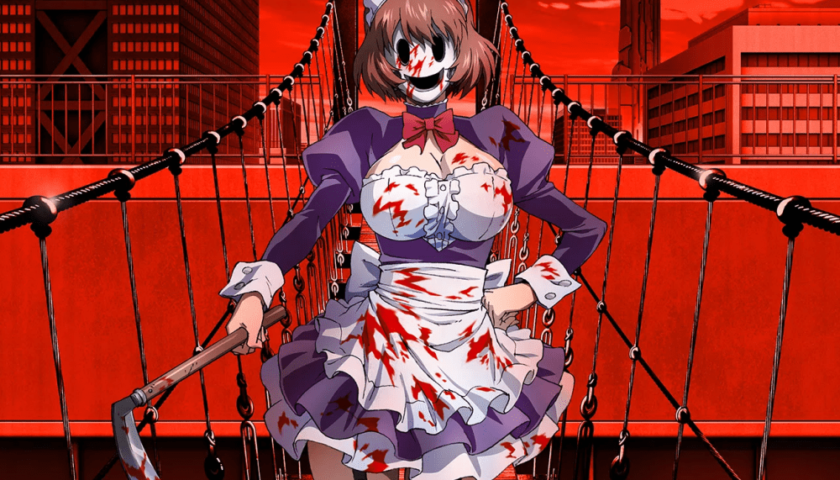 High Rise Invasion is nightmare scenario that the characters cannot wake up from. A thriller that will have your mind racing thousands of feet in the sky.

The main character Hanjo Yuri, an average High school student, woke up from a daydream to find herself trapped in a room with a masked man armed with an axe. This masked man was clearly not there to help her as she witnessed him murder a man right in front of her eyes. Running away was the only logical thing for Hanjo-San to do! She runs for her life in a unfamiliar building but something is very odd. All of the stairwells that lead to the bottom floor are blocked off with a notice that reads “Ground Level Access Prohibited” the only place for her to go is up. She makes her way to the rooftop only to be greeted by another plot twist. Hanjo Yuri is not in Tokyo anymore! She is stuck in a world of endless skyscrapers, narrow rope bridges, and masked psychopaths.

High Rise Invasion is pure Survivalist Horror! It reminds me of Doubt or Judge minus the setup scenes showing normal life. This manga throws you right into the action. Hanjo-San must decide if she is going to fight for her life or end it by jumping to her death. After a conversation with her older brother Oniichan she makes the decision to fight. She and her brother seem to be extremely close and the simple fact of knowing that he’s alive gives Honjo-San the courage she needs to survive.

This manga is full of twists and turns, Hanjo-San’s inner monologue, and some side characters sprinkled in the mix because someone’s got to die! There are also hints to a larger plot explaining how this skyscraper world exists and why.

When you wipe away the blood High Rise Invasion is a coming of age story. Hanjo-San finds the strength to save herself and become a moral hero in this chaotic cutthroat world. Once you start this thriller you won’t be able to put it down.

High-Rise Invasion is currently scheduled for a release on February 25th with Netflix. The series is directed by Masahiro Takata for Zero-G (the studio behind Tsugumomo). Touko Machida (7SEEDS) will be overseeing the series scripts, Yoichi Ueda (Gangsta.) will serve as character designer and chief animation director with tatsuo and Youichi Sakai composing the music. The opening theme for the series is titled “HON-NO,” as performed by EMPiRE, and the ending theme, “Watashi no Na wa Blue,” will be performed by Have a Nice Day!

Netflix officially describes High-Rise Invasion as such, “The unhinged and gory death-game manga High-Rise Invasion, created by Tsuina Miura (Ajin: Demi-Human) and Takahiro Oba (Box!), finally gets an anime adaptation! High school student Yuri Honjo finds herself lost in an “abnormal space” where countless skyscrapers are connected by suspension bridges and “masked figures” mercilessly slaughter their confused and fleeing victims. To survive in this hellish world, she has two choices: kill the masked figures or be killed. Yuri is determined to survive in order to destroy this irrational world, but what will be her ultimate fate.”

Netflix has released an extreme new trailer for High-Rise Invasion. Tsuina Miura and Takahiro Oba’s original manga series is one of the many new original adaptations and licenses Netflix has in the works for this year, and it’s starting off this run of new projects with a bloody bang. High-Rise Invasion is set in a deadly game where the main character must survive a series of masked assailants while running across the roofs of multiple skyscrapers. With a premise like this, there are bounds to be lots of violent scenes in the upcoming adaptation.

Proving just how much violence is on the way in the upcoming adaptation, High-Rise Invasion has released an “extreme” trailer that shows off lots of the bloody kills and violent assailants that main character Yuji Honjo will have to avoid or face off in the coming series. The violence is in line with the horror series, but fair warning before watching the trailer! You can check it out below: