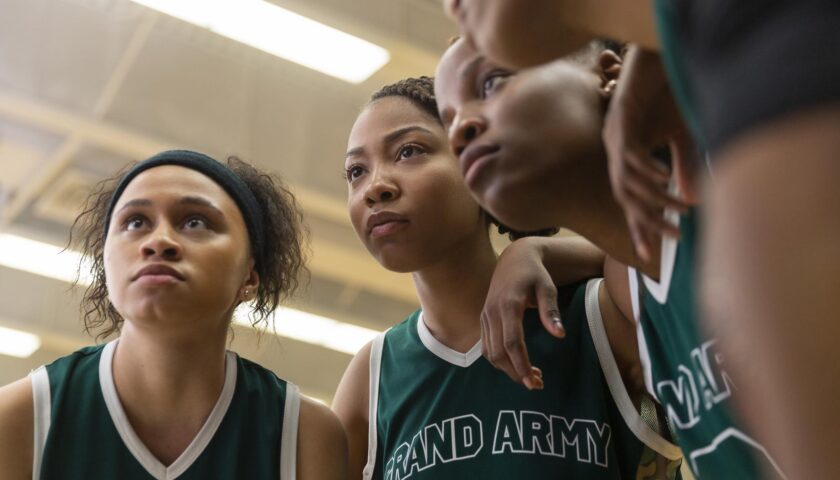 Set in early 2020 in Brooklyn, New York, Grand Army begins with a bang of Cardi B. lyrics, a city-wide emergency, and a flurry of notifications lighting up Grand Army High School students’ cellphones. Just a few minutes into the show’s premiere, the student body finds itself under lockdown following a suicide bombing attack in the community. In a frenzy of fear and crazed excitement, the students merge in stairwells and on classroom floors, waiting for the chaos to calm. This might seem far-reaching for a teen drama, but considering the times we’re in, it’s sadly typical.

In the ’90s, the short-lived teen drama My So-Called Life got to the heart and truth of the high school experience. More recently, HBO’s Euphoria cast a blazing light on Gen Z, a generation of bright-eyed humans witnessing more and discovering things quicker than older generations could have ever imagined. Based on her Slut: The Play, Katie Cappiello’s Grand Army joins the few projects that give us an authentic view of teenhood and the emotional saga of high school without exploiting its young people or hiding behind a glaze of Hollywood tropes.

Though Joey and Dominique “Dom” Pierre (Odley Jean) navigate the same space, and even a reserved respect for one another, they couldn’t be further apart. While Joey spends her days on the Lower East Side, Dom’s world is in Brooklyn. Whip-smart and determined, the high school junior is conflicted by her desire to help her struggling Haitian American family, while trying to follow her own dreams and make time for her friends: Tor (Crystal Sha’re Nelson), Nadja (Kerry Ann James), and Sonia (Naiya Ortiz). The burden of adultification—giving young girls and teens adult-like responsibilities—nearly costs Dom everything, including a refreshingly delightful romance with Grand Army basketball star John Ellis (Alphonso Romero Jones II).

Leila Kwan Zimmer (Amalia Yoo) is a frustrating and exhausting high school freshman—but that’s the point. A Chinese American adopted by white parents, Leila is having an identity crisis. Taunted by her fellow Asian students because she’s unable to speak Chinese and increasingly distant from her lifelong best friend, Grace (Keara Graves), Leila is desperate to belong. She begins stepping into identities and taking up characteristics of people around her, so nauseatingly unaware and entitled in her actions and motives, she’ll likely remind you of your own missteps as a young person.

As the students navigate their world in the early months of 2020, they wrestle with sexual assault, poverty, sexuality, college, feminism, racism, and identity. But what stands out about Grand Army is that Cappiello addresses the way society currently looks at teenagers and how we can learn from our past mistakes. As we see with Dom and saxophone-playing sophomore Jayson Jackson (Maliq Johnson), our collective obsession with zero-tolerance policies in the public school system changes the course of some kids’ lives—particularly when they are teens of color. Also, despite the #MeToo movement, the conversations on consent are far from eradicating rape culture.

Society often underestimates teenagers, ignoring their feelings and desires, knowing full well that they are much smarter and perceptive than they’re given credit for. Hollywood has followed suit, with caricatures of high school students often found on The CW and Freeform. Cappiello is careful not to patronize her teen characters as they learn to stretch and grow. Their pain and delight as events in their lives unfold is palpable and authentic, a duality we see in spades with studious senior Siddhartha Pakam (Amir Bageria). As one character writes, “You think it’s fun and games, but it’s actually more like hell.”

In addition to the powerful acting from this cast of newcomers, the presence of the adults who surround the Grand Army teens is felt heavily throughout the series. Though they are not always fair, the parental figures, counselors, and even religious leaders help create an environment where teens are genuinely heard and fortified by the older people around them. Parental support ensures that teens are held accountable for their actions while also allowing them the freedom to make mistakes. That teen-parent connection is welcome as it’s become rather rare in teen-focused dramas.

While there is a ton of good in Grand Army, there are also a few stumbles—like the animated sequences that come to life from Leila’s sketch pad. Though they offer the viewer insight into her inner thoughts, the scenes seem completely isolated from the world of the series and disrupt the show’s tone. Likewise, with the timeline of season one coming to a close in early March 2020, Cappiello chose to lightly address the looming coronavirus (COVID-19) pandemic, which would obviously halt these characters in their tracks. Following this trajectory deprives the story of many typical high school milestones: prom, graduation. Though true to life, this casts a gray cloud over the show, as our current reality seeps into the world of Grand Army.

Still, Grand Army is a quintessential show about the agony and power of being a teen. It puts the fearlessness of adolescence on display using modern-day Brooklyn as its backdrop. Although the seriesappears familiar in many ways to teen series that have come before it, these newcomers, amid the sheer chaos of high school in these rapid-paced episodes, also reflect the world as we know it now. The students of Grand Army High don’t feel like characters; they feel like people navigating their way through that cringe-worthy and confusing period of young adulthood, even if their actions make us a little uncomfortable.