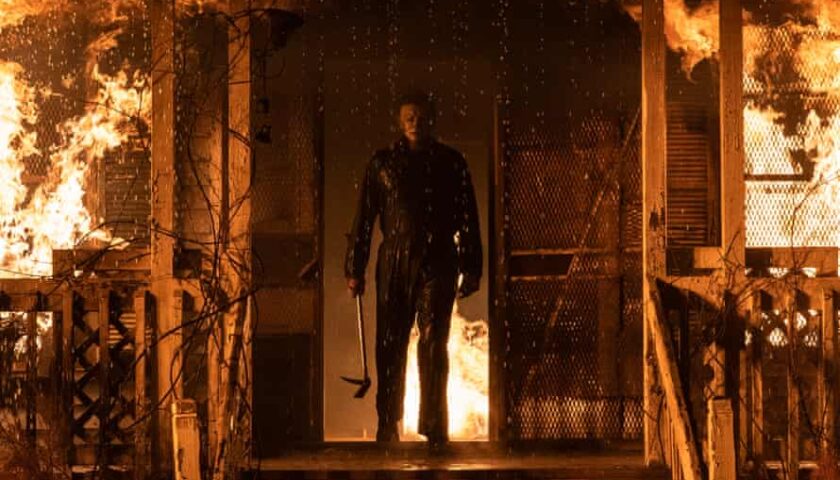 Bodies break in “Halloween Kills.” Blood paints walls, knives show real ingenuity when finding new parts of the body to carve up, and a pair of eyeballs burst like grapes under the weight of two sausage-like thumbs. And for all that, for all the carnage Michael Myers unleashes on the residents of Haddonfield, IL, a masked madman might be the lesser of their concerns. Because even as they live with the toll and trauma of killer Mike’s many reigns of terror, a far weightier Chef’s Knife of Damocles hangs over the townspeople’s heads — that $159.3 million the 2018 “Halloween” reboot banked at the domestic box-office.

To the townspeople’s corporeal misfortune, the $159.3 million check — $255.6 million worldwide! — was cashed by a Hollywood where successful performances don’t get sequels, they get sagas. Where one film’s promise that “Evil dies tonight” runs headfirst into next year’s promise of a threequel, just you wait. And thus, returning director David Gordon Green is stranded at an impasse: If his narrative picks up right where it left off, his story must remain in neutral, withholding any logical continuation for 2023’s “Halloween Ends.”

What to do then, but have some fun? Green has money to burn and time to kill, and the town of Haddonfield is right there waiting. And if this bloody entr’acte, whose title addition works as both noun and verb, has little to offer but a jacked up body count on a bed of fan service, it serves both with panache, charging forward as an almost elemental slasher outing unclouded by conscience, remorse, or delusions of morality. To paraphrase Ian Holm in that other late ’70s touchstone that spawned an unkillable franchise, you do have to admire its purity.

That would be purity of purpose, mind you, and not quite of theme. On that front, “Halloween Kills” is more than a bit muddled, with the film’s opening salvo offering the perfect illustrative example. After a short 1978-set prologue — well, hello digitally-reconstructed Donald Pleasance, you don’t look a day over [*Googles how old Donald Pleasance was when he made “Halloween”*] — we pick up right where we left off. Laurie Strode (Jamie Lee Curtis, but you knew that), her daughter Karen (Judy Greer), and granddaughter Allyson (Andi Matichak) are in the bed of a truck, rushing away from Laurie’s burning house while a fire brigade barrels toward it. “Let it burn,” Laurie screams.

Meanwhile, a man takes the stage at a bustling pub. Whereas in another timeline he bore the likeness of Paul Rudd, here it is Anthony Michael Hall who tells the audience, “My name is Tommy Doyle, and I was the child Laurie babysat.” It seems Tommy and his one-time bully Lonnie Elam (Robert Longstreet) have developed a support group for all the other seventh billed characters from the previous films, meeting every Halloween night to offer franchise aficionados an aha! callback (and, uh, to offer mutual support for and by victims of violence).

If Scott Teems, Danny McBride, and David Gordon Green’s script tries to engage with these questions of generational trauma, recognizing that Myers’s rampage affected more than one family, it undercuts any stab at earnestness in the very same moment. Speeches about community healing just don’t land the same when Michael is making mincemeat of the town’s fire brigade with a chainsaw. Of course that is the slasher film’s remit, with whatever release we get from the genre coming from seeing violence enacted not overcome, so you can’t exactly blame the filmmakers for doing their job.

Part of the thematic whiplash comes from simple narrative circumstances. Laurie took a knife to the gut at the end of the last film, after all, and her daughter just witnessed her husband’s murder minutes before; they can’t be expected to carry the load. The duty then falls to a series of redshirts whose expendability is underlined by the larger narrative structure of a franchise that wants, and needs, to remind you is a saga. Foregrounding this rack-them-up-knock-them-down dynamic more clearly than most other slasher films, “Halloween Kills” inadvertently opens a window into its own screenwriting challenge, forcing you to ask: How do you make characters pop just enough to liven up a scene or two, but not too much that the viewer will feel torn about seeing them impaled on a halogen light bar? How do you weave a tapestry with one hand while tearing it apart with another?

The answer would be: somewhat awkwardly. And if some characters pop better than others (a pair of married realtors who call each other Big John and Little John, and spend All Hallow’s Eve getting stoned and watching “Minnie and Moskowitz” are the clear MVPs) none stick around for too long. How could they? They’re not signed for the sequel.

“Halloween Kills” premiered at the 2021 Venice Film Festival. Universal Pictures releases it in theaters on October 15, 2021.

As new movies open in theaters during the COVID-19 pandemic, IndieWire will continue to review them whenever possible. We encourage readers to follow the safety precautions provided by CDC and health authorities. Additionally, our coverage will provide alternative viewing options whenever they are available.