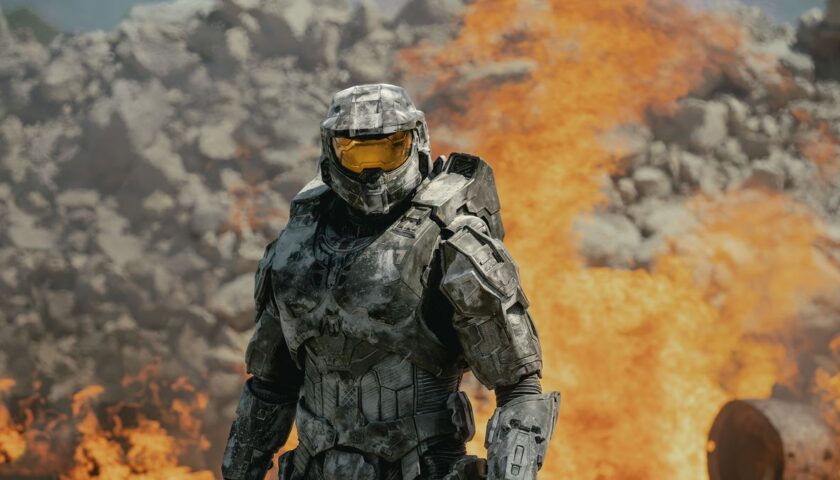 There are abnormalities in the bio-interfaces and anomalies in the neurolace metrics. The xenotechnology expert finds herself in a departmental turf war with a scientific advisor and seeks support from the head honcho at Naval Intelligence. Mysterious aliens assemble to make a mysterious plan; later, they re-assemble to continue making their mysterious plan. I don’t know what I expected from Halo, premiering March 24 on Paramount+, but this drama comes on strong with ambient techno-babble and bureaucratic realism. It’s as thrilling as a meeting.

Technically, this video game adaptation is a cosmic action-adventure. The premiere kicks off with a nasty battle in the outer colonies. A small rebellious outpost gets overrun by the brutal extraterrestrial Covenant forces, who can only be stopped by the equally brutal supersoldier Spartans. The most famous Spartan — in Halo’s universe and our own — is Master Chief, whose green astro-armor more or less invented 21st century gamer cool. Pablo Schreiber plays him here, though he’s obviously unrecognizable in the bullet-spraying, blood-blasting, head-shotting opening action scene.

Is it supposed to be fun watching a real-life Master Chief in action? We’re way past the point of any divergence between video game animation and cinematic special effects. Some of the Covenant look a bit Xbox 360 to me. (A few shots assume Master Chief’s POV, a first-person-shooter homage that just looks silly.) Part of the reason the original Halo: Combat Evolved set off such a depth charge was because it frequently looked better than the science fiction movies and TV shows of its time. Circa 2001, Star Wars and Star Trek were prequelizing into absurdity, reheating old ideas to ever-diminishing returns. Halo’s concepts were familiar — Starship Troopers on Ringworld plus ENERGY SWORD!!! — but the environments you moved through were awe-inspiring. Every battlescape doubled as a rejuvenating hike through the wilderness.

So it’s worrisome to count zero moments of real awe in the two episodes Paramount+ made available to critics. After 21 years, Halo has enough history for its own endless prequel circling. This first season (with a second already incoming) seems to be slowly inching its way toward where everything started in 2001. Master Chief discovers a mysterious artifact, which upends his opinions about his military superiors — and himself. He also meets Kwan (Yerin Ha), a brash young colonist with reason to distrust the Chief and his allies. Meanwhile, mystique swirls around two groups of corridor-dwelling official army types. In one corner, Dr. Catherine Halsey (Natascha McElhone) brews devious new developments in the Spartan program. The drama here is all committees, as in: “The security committee’s looking for an excuse to cut your funding!” Meanwhile, behind enemy lines, a Covenant-affiliated human named Makee (Charlie Murphy) schemes treachery. Everyone wants to find a glowing machine rock thing. Everywhere looks like green screen.

There are trees smaller than Schreiber, but his best performances have a wiry, small-guy energy like James Cagney woke up one morning in the body of an Eastern European power forward. Master Chief isn’t a completely thankless role — he shows his face more than you’d think — but any actor would look shrunken inside the Spartan mega-armor. The plot shines a light on the Chief’s background, and here I worry the makers of Halo are just arriving late to the party. Here’s the story of a famous helmeted space warrior assaulted by sad-youth flashbacks who pairs up with a young accomplice who melts his cold killer’s heart. It’s like Mandalorian without the pucks. What is Mandalorian without the pucks?

Necessary to point out that I played three Halo games to story completion, and spent a few hundred hours of the mid-2000s in multiplayer matches. This relatively moderate level of awareness probably makes me the show’s absolute worst demographic. The story variously tilts toward canonical completionists and confounded newbies, with dialogue variously impenetrable and explanatory. I want to stress that these two episodes basically comprise a prologue to multiple intrigues. The nine-episode first season could either speed up from here, or slow to a crawl. Ha suggests a chaotic vengeful counterpart to Schreiber’s ramrod-straight tough guy, but it’s not clear how central their dynamic will be.

The second chapter introduces Soren (Bokeem Woodbine), a renegade Spartan living in a lawless space refuge where you hop asteroids via train gondola. Woodbine’s crucial role is to help Master Chief chill out a bit: “Man, you are a stiff one, Johnny,” he accurately complains. Soren’s a breath of fresh air, and too much of these early Halo episodes lack oxygen. Showrunners Kyle Killen and Steven Kane seem to be working too hard to over-introduce characters with obvious motivations. (Both producers have departed the show.)

Worth remembering that one of the first Halo game’s sharpest decisions was an act of genre-stripping moderation. Players could only carry two weapons at a time, an invitation to careful strategy. In TV form, so far Halo’s all assault rifle but no direct hits. Consider what happens when Soren introduces Master Chief to his anarchic asteroid community. It’s “home,” Soren explains, “to every misfit, reprobate, outlaw, and renegade in the galaxy. No law, no police, no government, no responsibility.” Quite an introduction! They have a very nice time, and nothing bad happens.