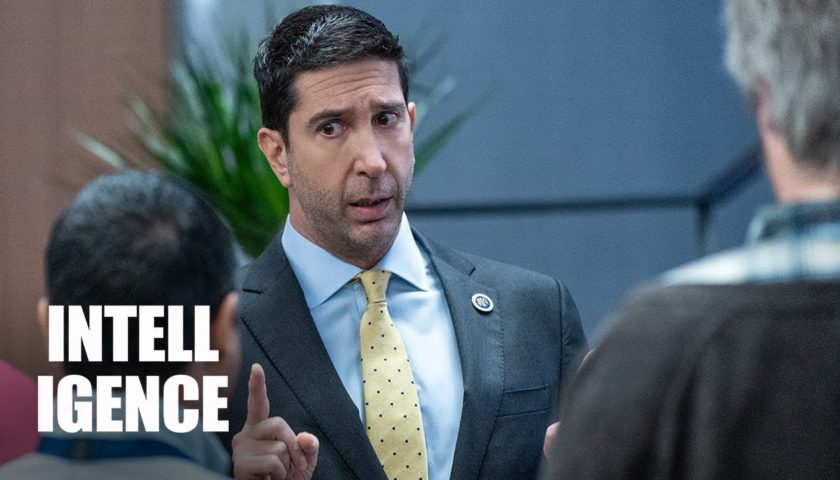 Hang up some bunting and buy in a cake: Intelligence is a special occasion. An otherwise smalltime British comedy is made noteworthy by the presence not just of a former Friends star, but an ex-Friend who hasn’t done much TV since Central Perk shut. David Schwimmer is back in sitcom, and he’s doing it on little old Sky One.

We’re at GCHQ in Cheltenham, where the finest exponents of Britain’s fightback against cyber-terrorism turn out to be erratic oddballs. When a transatlantic liaison programme causes the arrival from the NSA of sharp-suited American go-getter Jerry (Schwimmer), it’s great news for daffy pillock Joseph (writer/star Nick Mohammed) but not so good for the department’s relatively normal, and therefore perennially frustrated, manager Christine (Sylvestra Le Touzel). Jerry immediately causes chaos by giving unbidden motivational speeches, spraying plants with glue to stop them wilting, refusing to discuss his professional past and generally acting like he’s in charge.

If that sounds like a standard workplace sitcom, it is. Yet Schwimmer’s participation demands a big part, and it is this tension that makes Intelligence fall to pieces. Jerry is, if you stand a long way away and squint, a classic delusional leader – an infuriating buffoon whose bravado keeps cracking to reveal the idiot within. But that description could apply to many different characters, and a good sitcom picks one then refines it. Its lead can’t be, as Schwimmer is here, an umbrella creation who exhibits whatever nightmare-colleague characteristic the script feels like in that moment. Is Jerry dastardly or charming or aggressive or lecherous or clumsy or cunning or macho or gullible? At various points he is all of the above. There is no discernible human under his tangle of eccentricities.

Still, that’s fine isn’t it? No need to overanalyse – it’s a silly comedy! Think of it as a live-action cartoon! Well, no because the comedies people love, including animated ones, do the hard work Intelligence doesn’t. However broad they seem, they’re not jokes tossed into a vacuum: they have structure, and characters whose every utterance is something that specific person – who feels drawn from life rather than other TV shows – would say. Either that, or big visual set pieces and holes blown in the fourth wall stop those things mattering.

Intelligence, on the other hand, is a conventional, single-location sitcom that doesn’t have funny bones, because it doesn’t have bones at all. There are only five main characters, but three are far too faintly drawn – the worst example being Gana Bayarsaikhan as genius hacker Tova, who ends up as a taciturn, exoticised presence for her colleagues to occasionally wonder at or lust after. Vague scripting has even more discomfiting results when Jerry’s approach to counter-terror profiling proves to be bluntly racist but, because Intelligence is a show where nothing matters, it’s treated as just one more of his wacky quirks.

In fairness, Intelligence does settle down a little by the fourth episode (all six are available as a streaming box set – Sky has already commissioned a second run), with Schwimmer and Mohammed forming a brash-fool/meek-fool partnership. Few comic actors are better than Schwimmer, or indeed the naturally funny Mohammed, at performing those archetypes, but then the pair are put into a plot so boilerplate – a new, cool guy arrives, causing Jerry to ditch his even more uncool friend, and the rest writes itself – you almost wish the show would revert to being a mess.

Either way, Schwimmer’s talents are wasted. Like most of the Friends lineup he has a genius for combining garish mania with comforting relatability: take away the second part of the equation, and suddenly he looks a long way from home.

With those in power failing us …

… at this historic moment, we demand better. From the covid pandemic and police brutality to the marginalisation of minority communities around the world, leadership is broken. Devoid of the humility and inclusivity we so desperately need, leaders are gambling with public health, safety and the future of younger generations. Lacking in honesty and transparency, poor at crisis management, and given to narcissism, our leaders unapologetically prioritise serving themselves over the people they were elected to serve. We have to make them raise their game.

That’s what the Guardian’s here for. As an open, independent news organisation we investigate, interrogate and expose the incompetence and indifference of those in power, without fear. Our journalism is free from political and commercial bias – this makes us different. We can give a voice to the oppressed and neglected, and stand in solidarity with those who are calling for a fairer future. With your help we can bring about improvement.

Millions are flocking to the Guardian for quality news every day. We believe everyone deserves access to information that is fact-checked, and analysis that has authority and integrity. That’s why, unlike many others, we made a choice: to keep Guardian reporting open for all, regardless of where they live or what they can afford to pay.

We’re determined to provide journalism that helps each of us better understand the world, and take actions that challenge, unite, and inspire change – in times of crisis and beyond. Our work would not be possible without our readers, who now support our work from 180 countries around the world.

But news organisations are facing an existential threat. With advertising revenues plummeting, the Guardian risks losing a major source of its funding. More than ever before, we’re reliant on financial support from readers to fill the gap. Your support keeps us independent, open, and means we can maintain our high quality reporting – investigating, disentangling and interrogating.