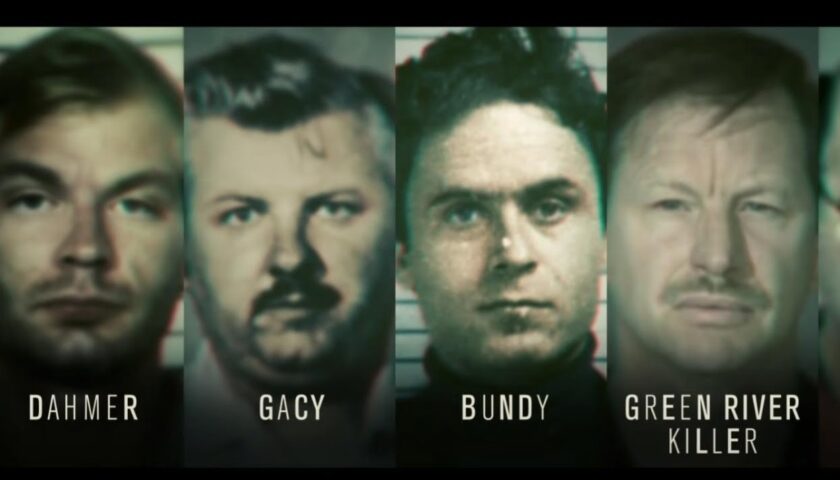 True crime obsessives, get ready! A&E’s latest True Crime Week is kicking off on Sunday, August 15, with Invisible Monsters: Serial Killers In America. The three-night docuseries event focuses on five of the most notorious serial killers in American history: Ted Bundy, John Wayne Gacy, Jeffrey Dahmer, “Green River Killer” Gary Leon Ridgway and “BTK Killer” Dennis Rader. While “The Five” (as they’re sometimes called) may be some of the most notorious, high-profile murderers the world has ever seen, Invisible Monsters promises to go deeper than what you already know by illustrating how their horrific histories creepily parallel one another during the time known as “The Golden Age of Serial Killing.

Or, as A&E describes the show, “Invisible Monsters: Serial Killers in America weaves the stories of five infamous serial killers–Ted Bundy, John Wayne Gacy, Jeffrey Dahmer, The Green River Killer and BTK–together into a single narrative exploring the perfect storm of what was happening in culture, communications, law enforcement, media, forensics, and technology that allowed them to proliferate and evade capture.”

The era of the 1970s and 1980s, when serial killers of America were at their most rampant, has never been examined as a whole, according to Dr. Robert Schug, a neurocriminology and clinical psychologist specializing in the criminal mind—and that’s exactly why true-crime watchers can look forward to when they watch the show.

“This is the first time we’re seeing these particular five serial killers together in one narrative,” he told Entertainment Tonight about the docuseries. “They were all sort of operating at the same time in history, and that’s a piece that often gets lost. In some respects, they even played off of each other during that critical time period.” Dr. Schug also takes issue with the frequent glorification of serial killers, telling the outlet, “The names of these five gentlemen have become cool names on t-shirts … And that’s unfortunate. They should not become our heroes.”

If you’re ready to learn more, keep reading to find out what to expect from Invisible Monsters: Serial Killers in America, including how to watch, what else you can watch during True Crime Week and some background on the killers profiled in the series. But please be warned: A lot of this material is incredibly disturbing and potentially triggering due to the sexual and physical violence they entail.

The first two episodes, airing Aug. 15, are titled “The Perfect Storm” and “Hiding in Plain Sight.” The second night of Invisible Monsters features the episodes “Catch Me If You Can” and “Media Firestorm.” Invisible Monsters‘ third and final night will see the debut of “Power and Control” and “End of an Era.”

the minute-long preview illustrates, the docuseries aims to dive into the “origins” of serial killing, as well as the common traits that linked “The Five” together, as few documentaries have done before. Invisible Monsters will explore how serial killers were able to operate unabated for years thanks to living in a world with “no computers and no DNA [testing]” and why serial killers are compelled to murder not out of necessity, but for personal pleasure,