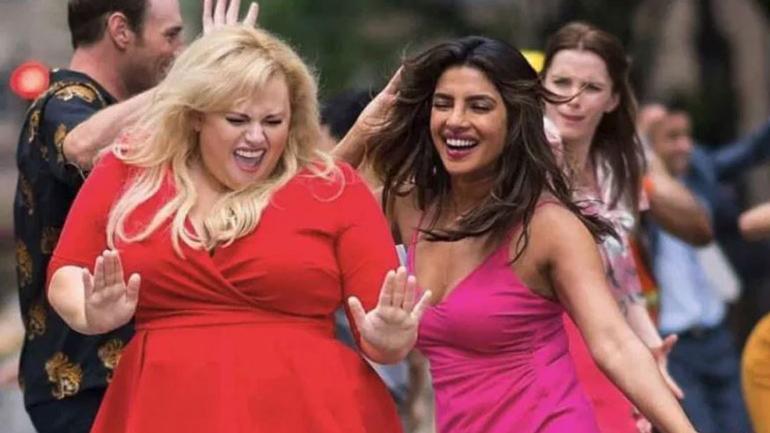 Review: As a pseudo-reluctant example of yet another formulaic romantic comedy, “Isn’t It Romantic” features fewer montages than you might expect, but there’s one right about the first-act turning point in which jaded New York architect Natalie (Rebel Wilson) lays out all the reasons she hates movies like “The Wedding Singer” and “My Best Friend’s Wedding.” Oh, to see the full three-hour version of that screed, fleshed out with a PowerPoint presentation or performed as a one-woman Off Broadway show — now that would be a subversive answer to the genre!

What Natalie doesn’t realize is that she’s trapped in a middling romantic comedy of her own, and that her rant is really just the movie’s way of signaling what it plans to parody over the next hour or so. Frankly, it’s high time someone did for the meet-cute movie what “Scream” did for slasher films — which is to say, poked some postmodern fun at a genre we know by heart, calling out all kinds of tropes, from the heroine’s inexplicably unemployed gay best friend (Brandon Scott Jones, too much) to her impossibly posh New York apartment. But in this case, complaining about such devices serves as a kind of ironic shield from the very sincerity that makes such movies work in the first place.

Natalie — who actively defies these clichés by living in a dingy hovel next door to a drug dealer in one of New York’s outer boroughs — may say she hates romantic comedies, but she seems to have seen ’em all. The film’s opening scene catches her 10-year-old self sitting with her nose practically pressed to the TV screen watching “Pretty Woman,” the way Abigail Breslin studies a VHS recording of the Miss America pageant at the outset of “Little Miss Sunshine.” Both those movies acknowledge that the broadcasts in question are hardly appropriate aspirational material for young girls (“Pretty Woman,” for one, is an R-rated fantasy about a prostitute who meets her Prince Charming) before going on to present their equally stylized ideas of how things are for an unconventional leading lady in the “real world.”

By any measure, Rebel Wilson is a natural comedic talent and a star, which should have been clear to anyone who watched her “Fat Amy” character steal the show from size-4 Anna Kendrick in the “Pitch Perfect” series. Wilson was of course wrong about breaking ground as the “first-ever plus-sized girl to be the star of a romantic comedy” (a claim that has since put her on the defensive on Twitter), but she’s right to recognize that Hollywood seldom casts actresses who look like her at the center of films like this. And guess what: It’s way more fun rooting for Rebel than it is pretending to care whether a more cookie-cutter actress will get the guy.

That’s the undeniable appeal of screenwriter Erin Cardillo’s comedic premise, fleshed out by fellow romantic comedy scribes Dana Fox (“The Wedding Date”) and Katie Silberman (“Set It Up”), only to be rather woodenly directed by Todd Strauss-Schulson(“A Very Harold & Kumar 3D Christmas”): As a child, Natalie is told by her boxed-wine-drinking mother (“Absolutely Fabulous” star Jennifer Saunders), “They don’t make movies about girls like us.” And so, her character’s slow to realize that she happens to be the center of one, all but ignoring Josh (Adam Devine), the workplace best friend who’s obviously her soul mate — until a concussion turns Natalie’s life into a kind of exaggerated farce.

It’s not the most promising sign when one of the first things to happen to Natalie when she leaves her apartment is being broadsided by a runaway halal food cart (technically, that should have landed her in the hospital and triggered the rom-com delusions 15 minutes earlier), though Wilson intuitively understands how to leverage her body type as a comedic asset — as in the way she plays the climactic slow-motion running scene, listed earlier as one of the clichés we can look forward to watching the movie dismantle. Wilson’s high-wattage appeal shines brightest a few minutes earlier during a showstopping “I Wanna Dance With Somebody” karaoke scene that’s so well staged and edited, it feels like another director stepped in to orchestrate this set-piece.

The rest of the movie plays out more or less according to formula, peppered with references to far better movies. But “Isn’t It Romantic” recognizes one essential rule of the genre: However predictable the overall outcome, audiences want to be surprised by the details along the way. Here, that’s not so much whom Natalie will end up with as what it will take to snap her out of her delusion — where the delusion isn’t how cutesy her life has become all of a sudden, but the notion that she was ever undeserving of love.