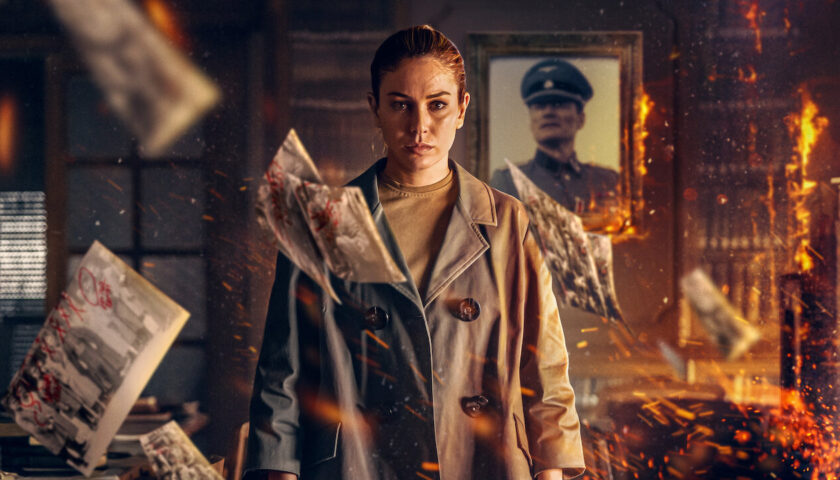 A group of what looks like spies or special agents pore over pictures of a woman they’re tailing, and talking about her daily routine. They grab guns and look to keep her from that they think she’s going to do.

A graphic says “Madrid, 1962.” Isabel Garrido (Blanca Suárez) is going to her job as a waitress in a German restaurant. There, one of the customers mentions how good her German is, almost blowing her cover. She looks at the reservation list for the next day and sees the name Otto Bachmann (Stefan Weinert).

She flashes back to when she was a little girl, being transported to the Mauthausen concentration camp by Nazi soldiers. When she’s called out of the line of mostly adult males, Bachmann, then a Nazi officer, is about to kill her for being out of place. Her father runs to save her and Bachmann shoots and kills him instead.

Isabel goes to a club after work and gets a vile of rat poison from a colorfully-dressed performer. She offers Isabel a gun but she has one of her own. Her plan: To poison Bachmann and his Nazi compatriots, and if that doesn’t work, she’ll take care of him with that gun.

The team that was seeking her out — Lucena (Iván Marcos), Sordo (Adrián Lastra), Castro (Óscar Casas) and Marsé (Francesc Garrido) — go to the restaurant, knowing what’s about to happen. She poisons the group’s dessert, but is upset when each of them take multiple bites but nothing happens. When she follos the group through the park with her gun, she’s intercepted by the team. A massive chase through the streets and alleyways of Madrid ensues, and Isabel thinks she escaped with nothing more than a cut on her hand, but when she gets to her flat, someone slams her head on the bathroom sink, knocking her out cold.

Lucena tries to figure her out when she wakes up, and threatens to shoot her, but she just gives her name and address. That tells him she’s good under pressure. She wants to know who her captors are, but he sees in her eyes someone who has “seen so much” as a survivor. During a consultation with his boss about Isabel, he’s convinced that, as the only person that knows what the Nazis hiding in Spain actually look like, she’s an asset, he comes back to try to convince her to join the team. He even shows her his numbered tattoo to show her that they are both survivors.

One catch: She has to forego getting revenge on Bachmann for now. Bachmann’s network, Odessa, is bringing in a notorious Nazi doctor, Aribert Heim (Jochen Horst) to live under a new identity in Spain; he’s the one they are going after. The idea is to control Bachmann and bring the people he works with in for Nuremburg-style international trials. It’s up to her if she wants to join their team.

The plot of the first episode of Jaguar, created by Ramón Campos and Gema R. Neira, is pretty straightforward. Isabel has a personal reason for wanting to kill one particular Nazi, and she’s being recruited by a team that’s been put together by some unknown (for now) entity that wants to bring all the hiding Nazis to justice. While the show has the potential to become more complicated, the refreshingly simple introduction does the job it needs to do.

We obviously know a lot about Isabel by the end of the first episode, but we don’t know a whole lot about the team that’s recruiting her. Usually, that’s a problem, but here it feels like it’s done on purpose. All the members of this team have their own motivations for hunting down Nazis in hiding, and learning about all of those motivations up front would have been too much. We’ll get to know them, and their secrets, during the season. Here, keeping things simple was the way to go.

It also gave room for an extended chase sequence that was one of the best we’ve seen on TV in years. Well planned and shot through various streets, stairways and alleyways, it ramped up the excitement factor of the first episode, and gave us hope that such well-choreographed action will be something we’ll see during the entire series. Sometimes, two people talking isn’t quite as exciting as seeing a massive chase. And in Jaguar, the more chases and fights we get, the better.