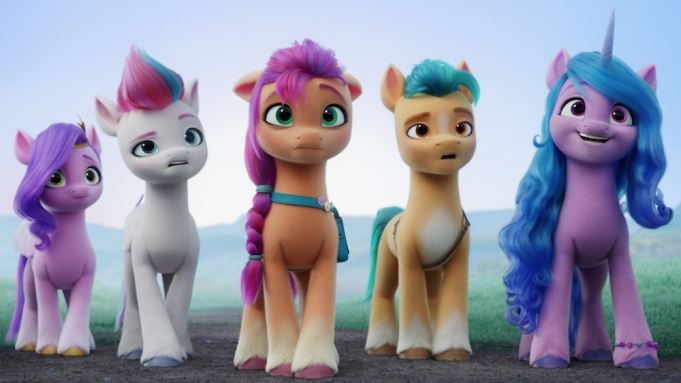 Hasbro’s My Little Pony has gone through quite a few different overhauls since the popular plaything’s initial creation in the 1980s. Not only have the toys themselves changed, morphing from a traditional cutesy cartoon style to a pushed anime-inspired appearance, but so have each of the films and televised series, progressively modernizing their aesthetics and storytelling. The franchise hit an all-time high when the “My Little Pony: Friendship Is Magic” era began in 2010, ushering in a new congregation of die-hard fans — not just young girls, but also “Bronies,” the affectionate nickname given to the passionate (some to the point of toxic) adult male fanbase.

The latest iteration, “My Little Pony: A New Generation,” lightly taps the reboot button, taking the prior decade’s series sensibilities another step. Paying homage to the past while telling a new tale about a filly’s seemingly impossible quest to reunite three fractured lands and cultures does wonders in delivering an innovative, subtly subversive family-friendly product. While it splinters off from the previous blueprint with new characters and CG animation, it retains its predecessors’ lively, spirited drive centered on friendship, empowerment and magic.

The mythical kingdom of Equestria has been hit hard since its three species — ponies, Pegasi and unicorns — were torn apart due to reasons no one can recall. Distrust and hatred of unicorns and Pegasi is ingrained in the minds of the anthropomorphized equine population of Maretime Bay — and that prejudice has run rampant. Schools have scrubbed the past from their history books, and their major commercial business, run by war-mongering profiteer Phyllis Cloverleaf (Elizabeth Perkins), is built solely on stoking fear of winged or horned ponykind. Yet the foreign creatures have become something of a curiosity for headstrong empath Sunny Starscout (Vanessa Hudgens) and her father Argyle (Michael McKean), who both believe in a path to understanding.

A few years later, after her father passes away, Sunny proudly carries the torch for reunification, protesting the xenophobic propaganda — much to the chagrin of her pony pals, heroic sheriff Hitch Trailblazer (James Marsden) and sniveling deputy Sprout Cloverleaf (Ken Jeong). Yet her world turns upside-down upon the arrival of Izzy (Kimiko Glenn), a bubbly, boisterous purple unicorn desperate to regain her lost magic. Fleeing from the ignorant townsfolk, the dynamic duo run away to the Pegasus-occupied Zephyr Heights hoping to gain answers from strangers they assume still have their magic: narcissistic Queen Haven (Jane Krakowski) and her two daughters, social media influencer Pipp Petals (Sofia Carson) and rebellious Zipp Storm (Liza Koshy). But as mysteries unravel and the truth about their world crystalizes, Sunny begins to question everything.

Directors Robert Cullen and José L. Ucha, along with co-director Mark Fattibene, give their picture a cinematic texture — best showcased in sequences such as Sunny and Izzy’s getaway from a sticky situation in which the pair must dodge slime balls that splatter on the virtual camera lens, and the big musical numbers where a fluid, clear-eyed visual dexterity meshes effortlessly with the perky, pop-infused soundtrack (executive produced by Ron Fair).

The saturated color story reflects narrative changes in tone, cooling during sorrowful moments. World-building is key in a reboot like this, and the filmmakers give each of the environments a distinctive individuality: Zephyr Heights is populated by lavish, golden-trimmed art deco architecture mirroring the Pegasi’s beauty; the unicorns’ land, Bridlewood, is a vibrant fairytale forest humorously contrasting their current spell of lethargy; and the Earth ponies’ Maretime Bay is a quaint, cozy hamlet reflective of their traditions.

Screenwriters Tim Sullivan and Gillian Berrow add layered, smart subtext to the narrative, despite it following a predictable path and bearing striking similarities to “Raya and the Last Dragon.” On-brand when it comes to the franchise’s virtues, it’s heartening to see the female protagonists discovering that their combined voices are a galvanizing force. The filmmakers keep the tone light-hearted and delightfully humorous. Yet their brilliance lies in their ability to sneak in heavier thematic content, speaking to systematic oppression, corruption and fascism.

That said, when it comes to character, there are some noticeably disappointing aspects. There are no consequences for those in power positions who’ve defrauded the public. Sprout, who turns into a dictator when Hitch is away from his post, gets off scot-free, as do his mom Phyllis, Queen Haven and Pippa. Though that creative decision may be aligned with the ponies’ magical power of forgiveness (which isn’t shown), or is an oversight full stop, it’s a misguided notion nonetheless delivered to the film’s younger audience. Plus, the third act climax gets unnecessarily tied up in itself, where a simpler, streamlined resolution would’ve been more beneficial.

Still, with its resonant sentiments on conquering fear, obliterating bigotry and bravely facing adversity, the toon finds its strength and emotional draw. Life-lessons dispensed on harnessing personal talents and gifts for the greater good are modestly moving. The entertaining and imagination-capturing adventures are not only enough to launch another beloved herd of hooved heroes; they should create a new generation of kiddie consumers in the process.