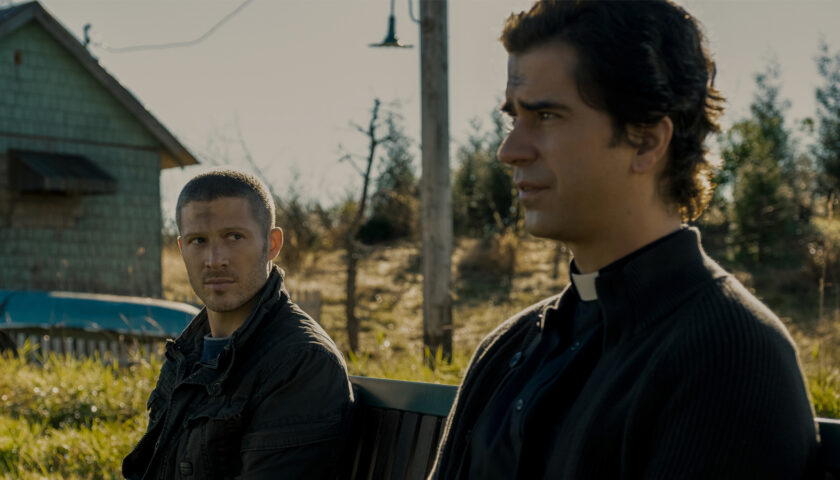 Even when he isn’t adapting Stephen King, writer-director Mike Flanagan has carved out a successful niche around stories that feel like they could have been adapted from Stephen King.

Most good horror comes from a play of allegory, where the thing that scares us might look like a killer clown or a ghost or a magic-wielding traveler with a funny hat, but it’s really addiction or grief or anything repressed. Like King, Flanagan has a gift for sometimes pushing that subtext far past the surface. A genre fan might at first be disappointed — “But wait, I was promised telekinetic murderous hamster-people, and you’re giving me a 45-minute AA meeting” — only to have the snot scared out of them when the telekinetic murderous hamster-person devours our hero’s sponsor.

Flanagan’s latest Netflix limited series — his third in four years, after respective hauntings at Hill House and Bly Manor — may be the furthest he’s pushed the subtext to date and it may, in turn, be his least purely scary offering. Midnight Mass (which crosses Needful Things with another King story that I won’t name so as not to spoil anything) isn’t braced with a single clear allegorical support beam. It’s about grief and addiction, but more than anything it’s an exploration of organized religion.

This is clearly the work of someone who has taken a deep inventory of his spiritual upbringing. That surely won’t keep some viewers from calling it bizarrely sacrilegious (it is, usually by intent) and others from lamenting how frequently it ignores the need for genre thrills in favor of long monologues about creed and ritual (it does, probably by intent). I found it consistently committed and admirably bonkers, even when it tested my patience. Whatever your reactions to the show happen to be, and some people are going to absolutely hate it, those reactions will come from a very personal and primal place, just like the place Flanagan has mined to make it.

The seven-episode series is packed with details that Netflix would prefer not be spoiled, so allow me to tiptoe. The series is set on Crockett Island, population 127. Crockett was never exactly thriving, but since a coastal oil spill, work has dried up and residents have been departing. That hasn’t stopped a pair of prodigal children from returning. Riley (Zach Gilford) is newly paroled after serving time for a crime that haunts his dreams, and has reunited with his parents (Henry Thomas and Kristin Lehman), who felt his departure from Crockett was already a betrayal. Erin (Kate Siegel) is taking over from her late mother as the island’s teacher, seeking a fresh start that coincides with her pregnancy.

Additional change has arrived in the form of Father Paul (Hamish Linklater), a charismatic priest replacing the island’s longtime monsignor. Miracles are about to occur that will affect residents including the paralyzed daughter (Annarah Cymone) of the mayor (Michael Trucco), the town drunk (Robert Longstreet), the local doctor (Annabeth Gish) and the Muslim sheriff (Rahul Kohli), who is concerned when those miracles spawn a wave of devotion, then zealotry and then, if you wait patiently enough, stranger and sometimes scarier stuff.

As any Bible reader can tell you, amidst the “begets” and endless codes of conduct, the Good Book has more than its share of fantastical elements. There’s a main protagonist who talks through burning bushes and turns women into salt pillars. There are resurrections, wrestling angels, people being swallowed by fish — and that’s before you get to whatever the heck is happening in the Book of Revelations. This is not exactly a deep reading of the Bible. There are more than a few points at which Midnight Mass feels like the work of a slightly bored altar boy killing time by realizing that if you adapted the text literally, the Bible would be completely R-rated and very difficult to take seriously.

That, of course, is where faith comes in, as well as the covenants passed down through hundreds of generations. Any fiction driven by the supernatural, whether or not it’s a horror story, requires a suspension of disbelief. Religion requires a purer form of belief, a total buying-in rather than just a setting aside of skepticism. The ambitious challenge Flanagan has set for himself in Midnight Mass is that he’s applying the religious standard to a story that becomes more and more outlandish as it goes along. He might not be asking viewers to believe that the events on Crockett Island could be real, but Flanagan needs you to accept that in this world, the residents would want or need to believe that they are, each for their own reasons. This is a place, after all, where every character is plagued by some measure of isolation and seeking some form of communion, be it the blood and body of their savior, or simply community, as in the solace of a support group.

It isn’t always the easiest of sells, partially because at some point there’s something monstrous revealed and it looks like a cross between BoJack Horseman’s Vincent Adultman (three boys stacked on top of one another inside a trench coat) and Slenderman. By the time the show gets around to revealing this figure’s true genre purpose, most viewers will either be completely out or completely in. The latter category requires a willingness to embrace multiple climactic episodes of gory chaos punctuated by 15-minute dialogues about alcoholism, the afterlife and interpretations of the New Testament that sometimes rise to the level of profound and sometimes fall to the level of “duh.”

Actually, maybe it’s not as cut-and-dry as that, because the fifth episode contains one of those seemingly endless portentous gabfests that, in this case, left me rolling my eyes and then ended with a scene that could have been ridiculous and instead leveled me. In Flanagan’s particular style, I’m not sure you could necessarily have the latter without the former. The same with a finale — Flanagan again mines several conclusive Stephen King tropes, not necessarily for the best — awash in only-partially-intended giggles, yet concluding with unexpected power.

Flanagan, who directed the entire series and wrote or co-wrote all its episodes, achieves a good deal of the sincerity he’s after — in large part because he has put together an ensemble that mirrors his commitment. That doesn’t, however, always add up to great acting.

Within his established troupe, Flanagan continues to play expertly to the strengths of Siegel (who is also his wife). She and Gish are moving in their characters’ quiet moments as well as their explosive ones; there’s very little in-between in this series. Flanagan veterans Longstreet, very capable of chewing scenery in ways that almost feel grounded, and Samantha Sloyan, as the embodiment of Crockett’s raveling zealotry, give bigger, complementary performances. Among the newcomers to Flanagan’s fold, Gilford and Linklater are standouts, the former excellent at playing mournful to the point of incapacitation, and the latter delivering more than a half-dozen extended speeches with an evangelist’s fervor.

In typically showy mode, the camerawork is itself a star, whether giving life to the run-down primitivism of the island locations or executing one of Flanagan’s trademark single-shot takes. The director isn’t, however, drawing peak returns from his reliance on haunting thunderstorms or bump-in-the-night jump-cut frights. Fewer of the terror set pieces land than in The Haunting of Hill House, but there are images here that are evocative, sad or disturbing enough to nearly carry a bloated 66-minute episode on their own. Flanagan’s next challenge will be figuring out how to make one of those two-people-on-a-couch scenes cinematic.

More than faith in the events of the show, Midnight Mass requires faith in Flanagan and the seriousness of purpose within his Stephen King pastiches. Even if the miniseries doesn’t stick its frightful landing, its ecclesiastical eeriness is a thing worth mulling over, be you rapturous or a doubting Thomas.