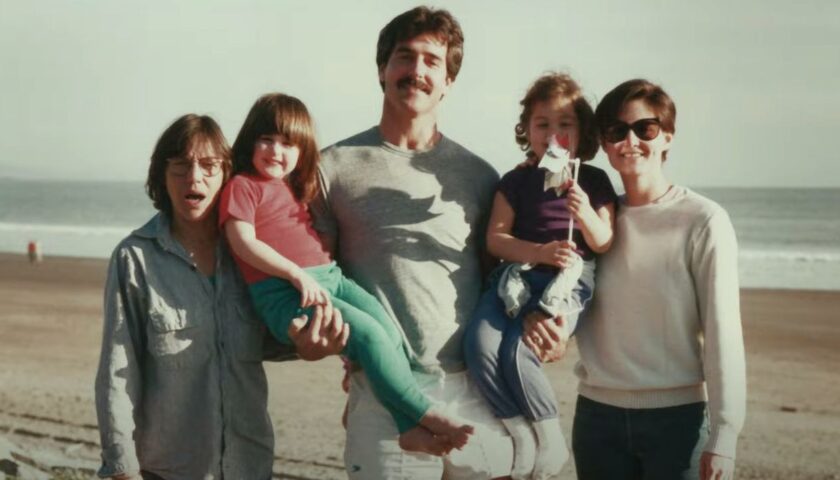 When director Ry Russo-Young was in college, she created a mixed-media performance art piece that cast herself, her two mothers and her sister as Little Red Riding Hoods, and her biological father — a sperm donor who’d spent years fighting the family in court for paternity rights — as the Big Bad Wolf. “I think playing those roles made things very clear,” she says now, nearly 20 years later, in Nuclear Family. “It was any blurriness that was hard to wrestle with.”

But wrestle she does in her docuseries for HBO, which chronicles in painful detail the lawsuit that upended her childhood. If the story she ends up with now isn’t as tidy as the one she’d imagined back then, that’s the point. The deeper she digs into the ordeal she endured, the more clouded the picture becomes by both love and fear.

The story unfolds across three hourlong chapters in more or less chronological order. The first episode charts the courtship between the filmmakers’ parents, Robin Young and Sandy Russo, and follows the couple’s excitement as they build the family they’ve always wanted. (Ry, born in 1981, is the couple’s second child, after big sister Cade.) Initially, Tom Steel, the gay man whose sperm had helped conceived Russo-Young, is welcomed into their orbit. As his bond with Russo-Young grows warmer, however, his relationship with her parents deteriorates. The second episode focuses on Steel’s lawsuit against the family, filed when Russo-Young was 9, and the four-year battle that ensued. The third wraps up what happened after, while also providing more insight into Steel’s side of the story and allowing Russo-Young to process her own feelings in the present.

Russo-Young’s storytelling approach has the warm, sometimes devastating intimacy of a personal collage. She cuts and pastes snippets from old home movies, archival footage and present-day interviews with friends and family to piece together her narrative. Tasteful reenactments and playful montages convey the spirit of events that weren’t captured in the moment, while clips from contemporary media help situate the family’s ordeal in the cultural context of the times — why have a talking-head expert tell us what the 1990s ideal of fatherhood was, when Russo-Young can just show us Dan Conner, Danny Tanner and Tim Taylor? At times, the format can suggest suspense where there doesn’t need to be any, or create mild confusion about the provenance of certain materials. But it does prioritize an emotional truthfulness in a way that a drier, more detached style might have struggled to achieve.

The family’s story necessarily dovetails with the recent history of LGBTQ rights in America, serving up snapshots of a community in the midst of rapid change. It’s not even until a friend passes Russo and Young a pamphlet in the late 1970s that it even occurs to them they might be able to have children of their own; by the time Steel takes them to court in the 1990s, judges still tend to favor biological parental relationships and rule against same-sex couples. Steel’s lawsuit, in Russo and Young’s eyes, is not just a betrayal but an existential threat to the life they’ve built in a world still skeptical they should be allowed to have it at all — and win or lose, their case has the potential to set precedents for similar cases to follow.

But Nuclear Family remains resolute in its focus on the personal, rather than political, repercussions of the case. It doesn’t try all that hard to serve up civics lessons, nor does it need to when the details speak for themselves. Like the fact that Russo had to spend the entire trial sitting outside the courtroom because she wasn’t Russo-Young’s biological mother, and was therefore considered a stranger in the eyes of the law. Or the fact that Steel, a lawyer famous for his work defending the lesbian and gay community, felt he had no choice but to invoke homophobic ideas he considered “an abomination” in his effort to sway the court in his favor.

The climax of the series arrives late in the third episode, as Russo-Young confronts her moms about her own evolving impressions of the ordeal they endured together, and the decisions they made in their need to protect her. The tears flow freely, and the hurt is apparent on the faces of Russo-Young and her mothers. Yet in their way, her parents are pleased. “We saved every piece of material from the lawsuit,” says Russo. “Because we wanted you to know the whole story as best as we could preserve it for you. What you’re doing now is what we wanted, as shitty as it is.” Though Russo-Young comes away from the exchange without clear answers or easy catharsis, her search for them becomes the resolution itself — as it must for so many who’ve suffered such childhood traumas.

“We had to, over and over again, in many different ways, explain why our family was a family,” Cade says in an interview from 1999. She’s talking about the lengths her family had to go to in order to prove to the court that they were, in fact, a real family, superseding even Steel’s biological claim to her sister. Watching Nuclear Family in 2021, though, the proof is in the pudding: Only a family would fight this hard to remain one. And only a family could come out the other end of it with such love to show after all that pain.