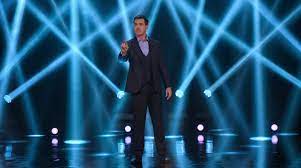 Netflix chose Christmas to release comedian Jimmy Carr’s latest special – His Dark Materials; a one-hour show that he describes with a disclaimer as one with jokes about terrible things. So, if you don’t have the stomach for downright offensive jokes that he said could be career-ending ones, about dwarvism, racism, the Holocaust, cancer, rape, prostitution, etc., then better stay away from this one. He doesn’t spare his audience either; it’s like they paid to get insulted.

Truth be told, Carr’s brand of comedy did not work for me. He appears to have quite the fan following though. After all, his audience paid to laugh at this line of comedy – dark and heavy on sarcasm. That’s some level of twisted to be able to laugh at the misfortune of another. But hey, that’s just me. I wasn’t particularly offended by his ‘jokes’, but couldn’t find it in me to laugh at them either.

It’s his style that was a wee bit off putting. For starters, although Carr’s jokes are observational, they do not have a pattern and are randomly thrown at his audience, which is fine. It’s just that he comes across as nauseatingly smug and self-assured at having landed a cracker of a punchline that he follows up with his flat-out-irritating nasal peals of laughter.

Jimmy Carr: His Dark Material is not for everyone. Only minutes into the special, my companion for this screening walked away muttering ‘terrible’ under her breath. But then, that’s what he said it would be – jokes about terrible things.

Comedy is subjective – you may not like what I do. I am more the Steve Martin, Martin Short, Michael McIntyre kinda comedy lover. So, this one was not for me.