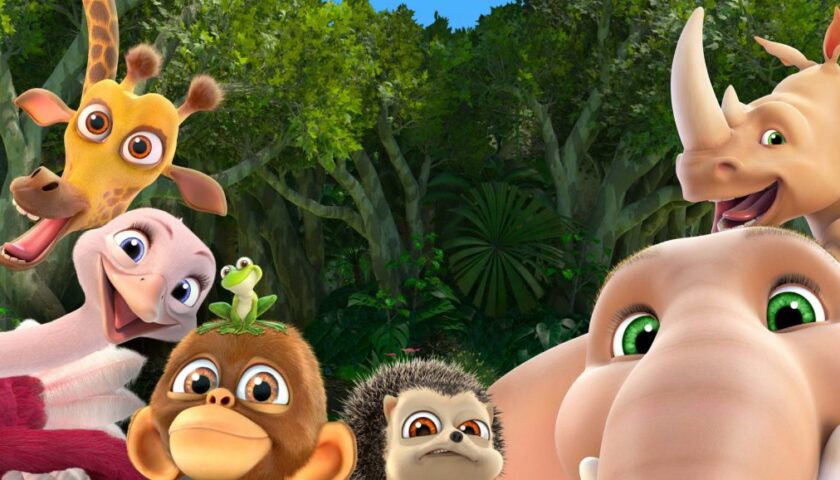 The popular online short series Jungle Beat becomes a major motion picture with a worldwide launch on June 26th in Jungle Beat: The Movie. What started as a short-form series in 2004 has grown over the years, with several spin-off series that helped increase the worldwide popularity of the characters, all available free for families. The film was one of ten selections in the Annecy International Animated Film Festival in the Official Feature Films category.

It’s a typical happy morning in the jungle for Munki, Trunk, Humph, and Rocky, until they suddenly discover they can talk. Munki discovers the reason, a purple sparkly alien named Fneep with a device that allows lifeforms to communicate with him. They quickly make friends with the extra terrestrial, but soon learn that he’s supposed to conquer earth as his first planet for his warrior race.

This brightly colored jungle world fittingly comes from Africa’s island nation of Mauritius. There have been films that look somewhat like Jungle Beat before, particularly Dreamworks’ Madagascar series (inspired by another island country near Mauritius) and Disney’s The Wild. Jungle Beat plays a little younger, aiming almost exclusively at a preschool audience.

Characters are fairly one dimensional, with Munki as an energetic omtomist, Trunk as basically a female elephant version of him, Rocky the happy clutz of a rhino, and Humph a grumpy hedgehog. The new character, Fneep, is timid and meek and through his friendship Munki, Trunk, Rocky, and Humph, he’ll find the strength he needs to stand up for himself. There’s nothing particularly riveting in the story or characters for parents to enjoy, but it’s also not unwatchable.

There is a reward for parents who stick with it with a touching ending that will make kids and parents alike want to share a big hug. The film takes a departure from the dialogue-free short series, but still primarily relies on animated action to entertain. Kids will love this colorful world and the appealing characters and families around the world can stream it through providers like Amazon Prime Video, Apple TV, and Google Play starting June 26th