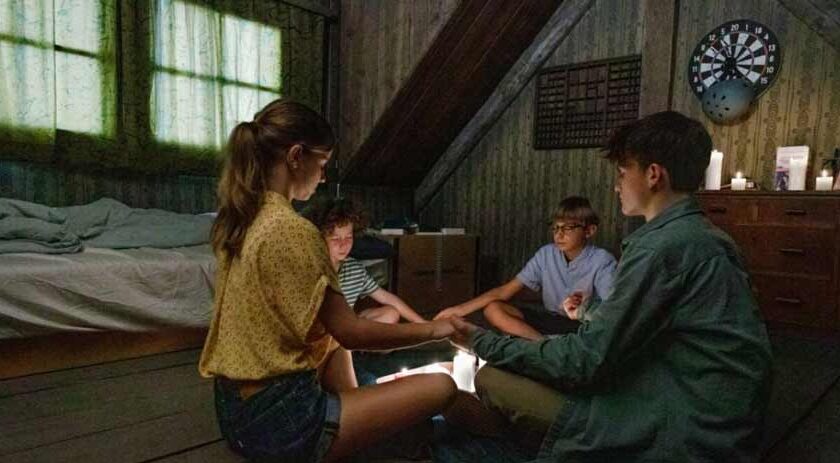 Teenagers, new friends, a small village, a mystery, neon titles, and synthesizers. Daniel Prochaska’s The Strange House has the eighties goodies that we’ve seen many times before and Netflix has been smart enough to milk after the success of Stranger Things. But the lack of creativity in its screenplay, adapted from Martina Wildner’s childrens book “Das Schaurige Haus,” doesn’t mean there isn’t fun to be had with this family-friendly coming-of-age ghost story set in an Austrian town.

The story follows Hendrik (Leon Orlandianyi), a teenager forced to leave his friends behind to move to a creepy house in a small town with his brother Eddi (Benno Rosskopf) and single mother Sabine (Julia Koschitz). Naturally, he’s quite disgruntled and finds only dullness in his surroundings. Not for long though because a possessed kid, a mysterious neighbor and eerie drawings in the wall signal that something very sinister is happening in his own home. Turns out a horrific murder took place there and Hendrik will have to solve the mystery behind it with the help of his new friends: the lovely nerd Fritz (Lars Bitterlich) and his crush Ida (Marii Weichsler).

From a generic local bully to a Super 8 projector, The Strange House is nostalgia bait that plays into the typical 80s coming-of-age tropes while being set in modern times. It isn’t bold, scary, or particularly creative. It lays out subplots that are never revisited and presents characters that are pretty much useless. There’s this local jerk called Chris who is introduced driving a giant tractor in the middle of the town; he’s mean to Hendrik, then disappears for the entire film only to resurface in the most cheesy and hilarious way possible.

Despite the weak plot, the film manages to stay fresh thanks to a lighthearted approach and endearing characters. The mystery’s resolution may be easy to figure out, but the journey to get there is worth the investment. The chemistry between the three leads creates a nice vibe of friendship that allows the story to flow freely. You won’t find comedic gold in their banter and might even find your eyes rolling a couple of times due to the cliched nature of some of the jokes, but the interactions are authentic and endearing. The love story between Ida and Hendrick won’t set screens on fire though.

Lars Bitterlich steals the show as Fritz, an adorable nerd who oozes confidence and always speaks his mind. The young actor plays the role with confidence and delivers the best lines; the film misses his charm whenever he’s not in a scene.

The Austrian setting is a big plus. Beautiful natural landscapes, classical architecture and a dance party filled with traditional dirndl and lederhosen costumes are elements that help The Strange House distinguish itself from similar movies, at least visually. The cinematography of Matthias Pötsch is very important in this regard; he uses some clever framing devices and overall makes the film a visually pleasant experience. The score is another highlight. Over the years, we’ve heard a lot of by-the-numbers synth scores for these types of films, but Karwan Marouf impresses with music that goes back in time while maintaining a modern vibe.

There are candlelit rituals, ghostly apparitions, and cheesy makeup, but Prochaska doesn’t get into gory territory nor does he try to use cheap jumpscares. The film remains family-friendly until the very end by using the delightful relationship between the three friends as its main anchor.

If you’re looking for a scary experience, you will have to look somewhere else because The Strange House works better as a charming coming-of-age than a mystery film. This is a fun ghost story that doesn’t innovate one bit but doesn’t overstay its welcome either. Solid entertainment for the family on a Sunday afternoon.