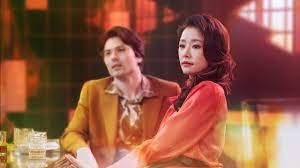 After a typhoon passes through Taiwan, we see a cop named Wen-cheng (Tony Yang) use some unusual methods to get a suspect to admit he peddled drugs from a coffee shop. He’s sent to the woods to investigate the body found there, and sees a business card from a nightclub called Light.

We flash to July, 1988, three months before “the incident.” Light is a Japanese-themed nightclub in Taipei’s red-light district, where Madame Rose (Ruby Lin) — given name Luo Yu-nong — and her ladies cater to wealthy businessmen, keeping them company, laughing at their jokes, and making sure their glasses are full.

Before the club opens for the night, Rose has to retrieve her business partner Sue (Cheryl Yang) — given name Su Qing-yi — from a date with a broke-ass college student she’s fallen for. The two are close friends, and while Sue wonders if this is going to be her life, Rose is confident in her relationship with Jiang-han (Rhydian Vaughan), an author who has gone incognito trying to get his first draft done.

Rose spends the night making sure the right ladies get to the right guests. She has to deal with most senior of her ladies, Ah-chi, who she not only has to shuffle from group to group in order to not get someone stuck with her, but she also has to deal with thugs who are trying to collect a debt from Ah-chi. The thugs follow Rose after the club closes, and she hides in an alley. She bashes the nose of another passer-by, and he grabs the wallet she drops, with the club’s business card inside.

Tired of Jiang-han not answering her calls, and realizing she has no idea where she lives, she follows him during the day. At his publisher’s office, he meets a young author and takes her to lunch. When Rose confronts him back at his flat, he basically tells her that he doesn’t love her anymore. But things are more complicated than that, as it seems he has a history with Sue that predates his time with Rose. But when he makes a drunken pass at Sue, she slaps him.

Light The Night certainly has a soapy feel to it, with a touch of melodrama mixed in. It’s likely to appeal to an audience that enjoys the personal relationships that are established in East Asian dramas, but the show is hard to get a read on during the first episode.

What it benefits from is two strong lead performances, from Ruby Lin as Rose and Cheryl Yang as Sue. From the start, their friendship is shown to be pretty strong, and it transcends the business relationship the two of them have. They look out for each other, and even when Jiang-han makes that pass at her after breaking up with Rose, Sue still is in a mode where she wants to protect her friend. Even though that friendship might get tested as the season goes along, it’ll still be at the core of the series, which makes for a solid foundation.

We hope that the other ladies get their own stories, because right now they’re a bit interchangeable. But other shows with big ensembles tend to find their footing as they explore the secondary characters, but it always takes some time. There’s also going to be a mystery to solve, which will affect every relationship on the show. How that gets integrated into the story will be the most intriguing aspect of Light The Night going forward.