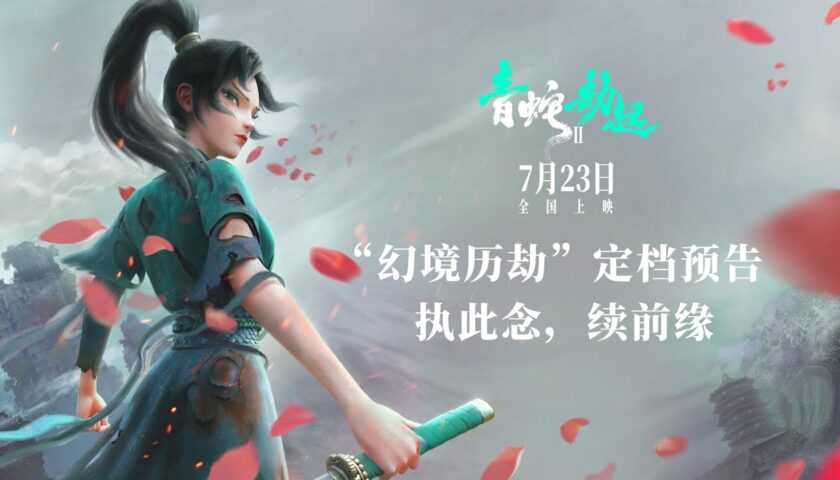 So, here I am after watching The White Snake, the 2019 Warner Brothers co-production with Chinese Animation studio Light Chaser Animation, I found the second film to be in similar lines to Frozen 2.

While Frozen was a classic retelling of the fairy tale the Disney way, the second part is more of spectacle and more of a statement of intent of women empowerment (still a great movie), than a proper continuation of the story organic way. But while Frozen 2 was a bit superior in terms of storytelling, The Green Snake is more about action spectacle than true narrative storytelling. Hence it resulted in episodic narration with more kinetic action and less organic romance.

For those uninitiated, The White Snake is the romance between a magical White Snake which has a shot at immortal life, and a human being (a snake catcher from a village of snake catchers). The Green Snake is more of a supporting role and has ambiguous characterization in the original (more in the upcoming review) and now it’s the true protagonist with a character arc.

The movie starts with a spectacular action episode where the two sisters in spirit, The White Snake and The Green Snake (two demons-snakes of the first film) fighting the villainous Daoist Monk Fa Hai who is trying to hunt them down for his own purpose.

The sequence ends up as a defeat of sorts for the sisters with the elder one – The White Snake (Blanca or Xiao Bai) – is captured and the younger one – The Green Snake (Verta or Xiao Qing) is banished to Asuraville which is a modern-day mega city-style world where the new worlds of these times and the ancient things do exist.

It is a fantastic and gasp-inducing opening. But that’s that. From there onwards, the classical storytelling ends and it’s all about spectacle and statements of intent from the characters. But the statements are not organic. They are unidimensional. Take, for example, the dialogue in the aftermath of the Green Snake getting betrayed by her lover in Asuraville: In this world Men Cannot Be Trusted.

Another gem of a forced dialogue roughly translates into English: come on, let’s do it on your own as no one’s needed. But these things aside, my biggest gripe with The Green Snake is old-school storytelling with action and the character development of the original film is missing here.

Xuan and his romance with Xiao Bai the White Snake have formed the heart of the first movie. As the emotional core is quite strong with each of the two trying to be there for each other braving several obstacles and dangers, the audience were glued to their bonding and cheered when they became finally one. But this angle is completely sidetracked in The White Snake 2.

It is true that all the while she’s roaming in Asuraville and is part of one dangerous adventure after another even as she’s several times saved by a brave young man, The Green Snake or Xiao Qing is searching for her sister like White Snake. What happened to the child of the White Snake? Nobody (not our colleague) bothers about the child.

This robs us of the fun of watching a wonderful film unfolding before our eyes. This, along with problematic mechanic settings of the Asura world such as how time passes in this world vs time in the real world. The dialogs are generic and convey no real wisdom.

The classical folk tale of The White Snake or The White Lady was improvised with innovative ideas and updated for a universally appealing animated movie, we felt very happy watching for the creativity was spot on with co-directors Amp Wong and Zhao Ji unleashing the myth on a grand scale. But here the soul is missing (tears emoji). The movie was so well made and has its emotional core intact, those who love the classic folk tale forgave the changes made to the source and the flaws that crept in. We’re excited about the second part.

While the first part was a Hollywood co-produced Chinese animated film with a Chinese soul, what we ended up seeing, is a Chinese-made Hollywood-style pop-corn blockbuster with great visuals but a little soul in it – with The Sequel The Green Snake. For those who loved the first film, there is every chance that this sequel can turn out to be a great disappointment. Fret not. It’s still great entertainment. The visuals are equally superior as the first one though Warner Brothers aren’t part of it now, and Alina took that place. The voice cast has done a splendid job.

Director Amp Wong has the solo credit of making this film. As he said in multiple interviews, the Green Snake is more of a modern-day tale which is a retelling of the classic in a modernistic way to cater to the modern-day audience. But as a modern-day 30 something mother of a couple of beautiful twins, I have to say my thirst for watching a beautiful Chinese animated film about Chinese characters is not satisfied. A watchable animation fantasy action spectacle for those who didn’t watch the original. May appeal more to the international audience who want exotic visuals.