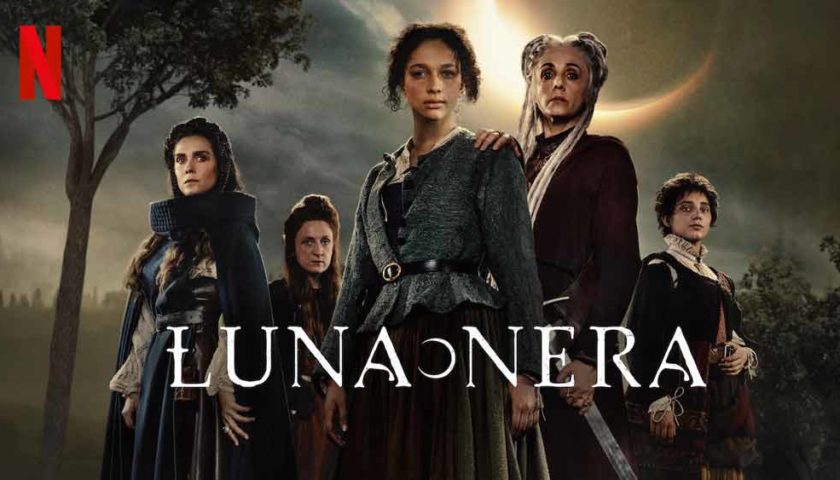 Suffering from an untimely release right on the back of Chilling Adventures of Sabrina Season 3, Netflix’s new Italian original Luna Nera, created by Francesca Manieri, Laura Paolucci, and Tiziana Triana, is a handsome attempt at period storytelling that, despite impressive production and a creative team full of women, still fails to put a spell on audiences with a torpid Romeo & Juliet-style doomed love story at its core and only a cursory unpacking of its themes elsewhere.

Set in 17th Century Italy and concerning chiefly the forbidden romance between a woman accused of witchcraft and a blood relative of the group who hunts such women down, there’s a distinct empowering undercurrent here that unfortunately never reaches its potential throughout the six-episode first season. The relatively unique perspectives afforded by the period setting and the central female characters never really amount to much in a messy jumble of characters and subplots and a noticeable lack of chemistry between the leads whose romance is supposed to drive the plot.

A decent opening episode to Luna Nera puts its best foot forward, but the show quickly settles into mundane rhythms of prophecy, ancient cabals, and burgeoning magical powers. Utilitarian writing helps to put this across, but not in a way that feels meaningful or even all that entertaining, and a cursory examination of science’s on-going battle with the religion and the historical mistreatment of women feel supplementary rather than integral.

A second season stands a chance to expand some of the show’s ideas into more workable ones, especially with so much time here devoted to introducing and then juggling multiple elements that ultimately get dropped midway through the story. Time will obviously tell in that regard, but with Luna Nera, Netflix probably doesn’t have a contender for Sabrina’s throne.