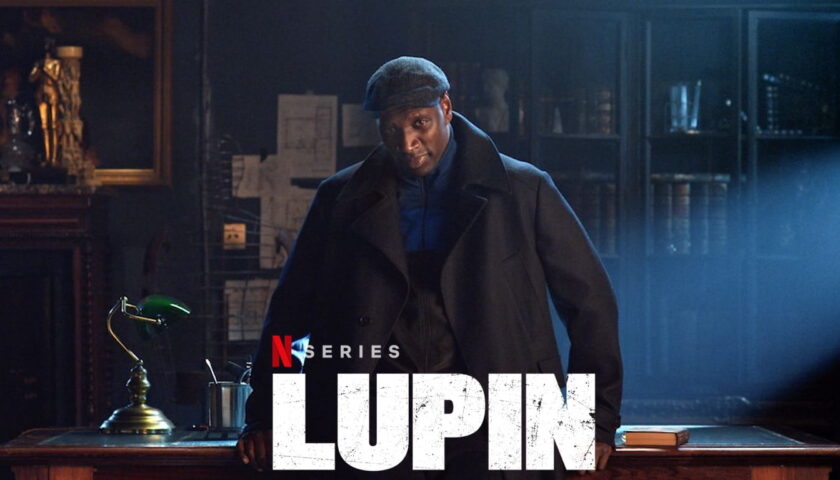 With a muscular 6’ 3” frame, gentleman thief Assane Diop (Omar Sy) shouldn’t fade into the background. But as a Senegalese immigrant living in Paris, he does. Ever since his father’s incarceration—accused of stealing a priceless necklace belonging to Marie Antoinette from his employer Mr. Pelligrini (Hervé Pierre)—and his father’s later death, Assane has known how often Black immigrants are overlooked. He uses white folks’ racial blind spots as cover to carry out his brazen robberies. And finds inspiration for his heists in the mysteries of the fictional gentleman thief penned by the French novelist Maurice Leblanc, Arsène Lupin.

Created by George Kay (“Killing Eve”) in collaboration with François Uzan (“Family Business”), “Lupin” is an addictive, clever puzzle that combines elements from “Luther,” Sherlock Holmes,” and “Inside Man” for an engrossing experience.

For every answer Kay and Uzan offer in this ten-episode French crime drama, more questions arise. Take the premiere, wherein Assane concocts a plan to steal Marie Antoinette’s aforementioned necklace from an auction at the Louvre. To furnish his scheme, he enlists a trio of loan sharks he owes serious money to as a way to cancel his debt. He’s also behind in his alimony payments to his ex-wife Claire (Ludivine Sagnier), and missing his visitations with his teenage son Raoul (Etan Simon). Through flashbacks, Kay and Uzan further reveal Assane’s once close relationship to Mr. Pelligrini’s daughter Juliette (Clotilde Hesme) and her mother Anne (Nicole Garcia). We wonder how Assane, who’s working as a simple janitor, can now craft a near-foolproof ploy to rob the former Queen’s crown jewels. Where did he find the means to bankroll this job? Why does he trust these abhorrent loan sharks?

“Lupin” is as patient as it is smart, and its plot twists like melted railroad tracks. And yet the narrative train, through some tight savvy editing, always exits on the other side of the tunnel. But we’re left wondering how it didn’t skip its twisted tracks.

See, Assane is as wily as the show’s writing. He’s a silver tongue snake charmer who relies on convincing acting, disguises, quick-thinking, and his race. When so often questioned by white law enforcement, he implies his accusers’ racism to his advantage.

Kay and Uzan are also intrigued by other people often ignored. In later episodes, a trio of detectives work to solve the Louvre heist. And though Youssef (Soufiane Guerrab)—who we’re led to believe is of Middle Eastern descent—could crack the case, his white colleagues on the police force ignore his sound theories. There’s also a French journalist (Anne Benoit, a vivid lightning bolt), long dismissed for her age and sex, who plays a pivotal role, too. All of these characters are shadows in an alley blotched by white street lights. Christophe Nuyens and Martial Schmeltz’s photography, which uses lens flares and foregrounded shadows to obscure Assane’s identity, furthers the series’ enigmatic quality.

Within the Assane character, Kay and Uzan pile in references to other detective greats. Assane’s rough and tumble fighting style, along with his frame, is reminiscent of “Luther.” The reliance on disguises, and the adrenaline rush from fooling unsuspecting victims, is reminiscent of Sherlock Holmes. And Assane’s skillful rouses, acted out through the show’s adroit staging, to steal sinful diamonds, recalls “Inside Man.” But it’s telling how these detective narratives are often carried out by cynical protagonists—not so the case with Omar Sy’s performance, which avoids such characteristics with a sincere, soft touch. Sy’s Assane is so damn lovable, even when he’s clearly wrong, and especially when he ingeniously gets the better of his opponent.

Some components whither: Through the first five episodes, Assane’s Watson-inspired sidekick Benjamin (Antoine Gouy), is an afterthought who barely progresses. Likewise, an unreliable police commissioner (Vincent Garanger) overstays his welcome. Nevertheless, in a series this patient, it’s difficult to draw any final conclusions until the finale’s closing minutes. And when Kay and Uzan excavate Assane’s failed marriage and his suspenseful heists, we’re given a well-staged, fast-paced crime thriller that often leaves one awestruck. “Lupin” is not only totally addictive, it’s the first great television show of 2021.