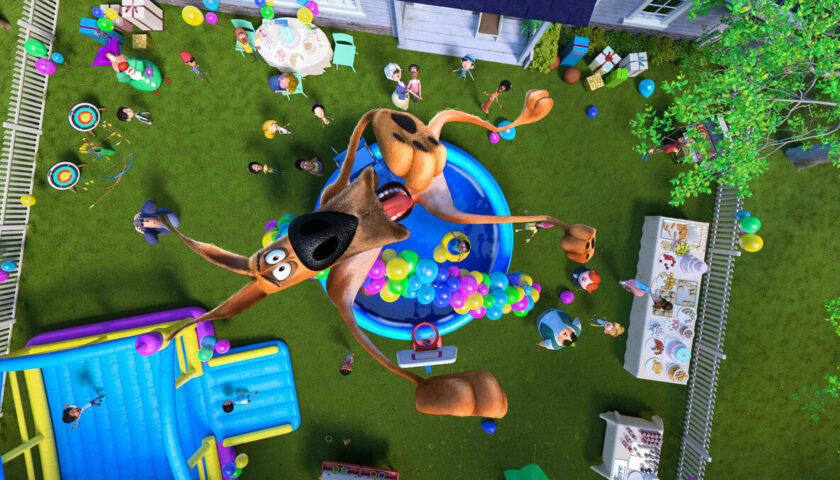 In the greener days of the internet, a proto-meme image bouncing around forums and chat boards depicted a crudely computer-animated Marmaduke sitting at an Italian restaurant, getting yelled at by a bearded man: “SIGNOR MARMADUKE! WHATTA YOU DOIN’ IN LUIGI’S PIZZA PLACE WHEN YOU A DOG AND NO PEOPLE?” This man, presumably Luigi, then notices that something in Marmaduke’s red, pitiless eyes has transformed both his hands into Santa Claus heads, which laugh in Japanese and act as rocket thrusters propelling him into space.

My working theory is that the team responsible for Netflix’s new feature-length Marmaduke vehicle had no knowledge of the messy-yet-lovable great Dane’s nearly 60-year comic strip, and instead took as their source material this hallucinatory webcomic most likely thrown together by some lunatic in 20 minutes. In the carelessness of its slapdash construction, the off-putting flatness of its style, its brazen resistance to basic foundations of logic, and its hostility toward conventional humor that borders on the avant-garde, the new film (a term generously applied to this haphazard sequence of moving images) has far more in common with the hectic, ugly delirium of online obscurities than the newspaper’s funny pages. Premiered without fanfare and tucked away in the dustiest crannies of the Big Red N’s content library, it’s now right where it belongs, a digital oddity so minor and off-brand it could barely be said to exist at all.

Which would be a real favor to star Pete Davidson, evidently continuing on his Adam Sandler-styled career path by doing the kind of spirit-crushing kiddie flick that gave the Sandman enough self-loathing to fuel Funny People. Lending his nasal Staten Island brogue to our canine pal, the SNL lothario’s every line-read sounds sarcastic, as if he wants in-the-know viewers to understand that he took this job as a scare-quoted bit. Not since Eric Roberts growled his way through A Talking Cat!?! has the sleazy texture of a vocal performance been so violently at odds with the tummy-scratchable critter mouthing the words. And yet this dissonance does mesh in a counterintuitive way with the rest of the film, which shares a certain lack of fluency in even the most rudimentary cinematic vocabulary. And, for that matter, sometimes the vocabulary of the English language.

Forget about a consistent tone – before too long, that starts feeling like a lot to ask from a script that bumbles the simple arrangement of plot points in a linear sequence. Action is guided less by causality than by deep, primeval urges for which our civilization has no name, animal-brain impulses thrusting an unusually human animal from one hijink to the next. Marmaduke first galumphs into a birthday party hot on the trail of pork chops and destroys an above-ground pool, loosing a hurricane’s worth of water that drowns the entire neighborhood. In addition to establishing Marmaduke as both a source of tremendous shame for his family – “No one at school wants to be my friend because my dog’s a loser!” cries history’s cruelest child – as well as an overnight viral celebrity, this catches the attention of haughty trainer Guy Hilton (voice of Brian Hull), convinced that turning this disaster on four legs into a dog-show champion will be his career’s crowning glory. His work is cut out for him; in the qualifying round, Marmaduke farts so badly that a significant number of onlookers vomit and die.

Luckily, this does not bar him from the finals organized as a doggy Olympiad, with each nation of the world appointing a canine representative. Mexico, for instance, gets a hyperactive chihuahua with a Speedy Gonzalez accent whose obedience is tested by offering him a taco he must refrain from gobbling. The other acts aren’t quite so jauntily racist, though they all find their own way of being just as ill-advised: a French poodle’s come-hither coquette routine invites us to have impure thoughts about a cartoon dog, and an out-of-place martial arts interlude with the Chinese competitor shoehorns in a reminder that Hong Kong-based animation outfit One Cool Group had a hand in this quagmire.

The studio first credited with the sex romp Naked Ambition 2 forms an axis of incompetence with co-directors Youngki Lee (a producer of direct-to-video ephemera, taking the director’s chair for the first time), Mark AZ Dippé (credited with 1997’s Spawn and 2017’s equally hellacious Michael Jackson’s Halloween), and Phil Nibbelink (of An American Tail: Fievel Goes West fame). With nearly a century of man-years in the biz between them, they nonetheless top out at a level of aesthetic amateurishness seldom seen in wide-release motion pictures, more closely associated with DVD menu screens, computer games meant to teach children the fundamentals of phonics, or, yes, MS Paint abominations like the unauthorized scene at Luigi’s pizza parlor.

The cumulative effect of using technology last considered state-of-the-art in 2003 to bring life to dialogue with the stilted functionality of a first foray into fan fiction is that none of this seems real, or at least not real enough to merit a review such as this one. But that’s the paradox of Netflix, a studio that hasn’t let growth toward industry legitimacy keep them from sluicing bush-league crapola into the water supply: cinema is whatever they say it is, with no distinction made between the half-baked proof-of-concept demos and the genuine articles. It’s all thrown on to the pile with the others, and we move on.