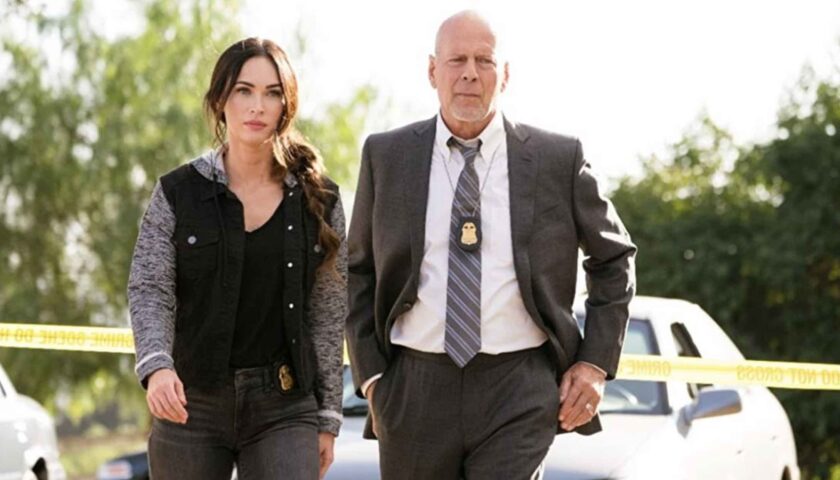 Midnight in the Switchgrass presented me with a bit of a dilemma. After Cosmic Sin and Out of Death you can imagine the last thing I wanted to watch was another Bruce Willis film. But Megan Fox had impressed me in Till Death which made me want to see it. That and the fact it claimed to have a budget of $15,000,000 which should buy some decent production values convinced me to watch it.

Karl Helter (Bruce Willis, Die Hard) and Rebecca Lombardi (Megan Fox, Transformers) are FBI agents trying to crack a human trafficking ring. Things become complicated when they find that their case may be related to another investigation. Byron Crawford (Emile Hirsch, Son, Killer Joe) has been tracking the serial murderer who would become known as “The Truck Stop Killer” for years. But his superiors refuse to admit the cases are connected. Seeing his chance he teams up with Helter and Lombardi.

Writer Alan Horsnail and director Randall Emmett utilize the film’s first act to introduce our three leads and their cases. Apart from an undercover Fox beating up a violent john played by her current boyfriend Colson Baker (Bird Box, The Dirt) better known as rapper Machine Gun Kelly, it’s all talk. Thankfully, while Emmett is a first-time director he has over a hundred credits as a producer that includes everything from the 2005 version of The Amityville Horror to Boss Level. Along the way, he learned enough about directing to keep it interesting, or at least watchable, until the start of the second act.

That’s when Peter (Lukas Haas, Dark Was the Night, Inception), a manager for a trucking company whose wife is not happy with the number of runs he’s had to cover lately, enters the story. Almost immediately we see him with a victim. And shortly after that, a meeting between him and Lombardi goes very wrong, leaving Crawford racing to save her.

Despite being set in Pennsecola Florida sometime in 2004, Midnight in the Switchgrass is billed as being based on the case of Texas’ most dangerous serial killer, Robert Ben Rhoades. Rhoades was a truck driver who left a trail of bodies across the US before an Arizona State Trooper investigating a disabled truck happened across him and his most recent victim in 1990. About all they seem to have kept was Rhoades being a truck driver and his making his cab’s sleeper into a torture chamber.

Midnight in the Switchgrass is billed as a thriller but, until the final act, it’s not very thrilling. It opens like a mystery but then gives the killer away as soon as he appears on screen, wasting the buildup and making much of the dialogue we sat through unnecessary. It starts to pick up a bit after we see Peter take a victim but it’s only after Lombardi is kidnapped and it becomes a race against time to save her that the film gives us any serious thrills or suspense.

And Midnight in the Switchgrass’ final act does a good job of it as the script juggles dual narratives of Lombardi and another victim (Caitlin Carmichael, Martyrs) trying to escape while Crawford, Willis’s character having exited the film by this point, trying to put the pieces together to find her. If it had been able to reach that level sooner it would have been a much better film.

Instead, Midnight in the Switchgrass is an average film whose first hour is held together by some decent direction and some good performances from Fox and Hirsch as driven law enforcement officers. Haas, while not a particularly imposing presence is quite creepy as the loving husband and father with a taste for rape and murder.

Willis once again makes an extended cameo, delivering a few lines in a couple of scenes. But that’s fine because Midnight in the Switchgrass’ story belongs to Fox and Hirsch’s characters and they do a good enough job of telling it without him.

Lionsgate will release Midnight in the Switchgrass to Digital and VOD on July 23rd. It comes to DVD and Blu Ray on July 27th.