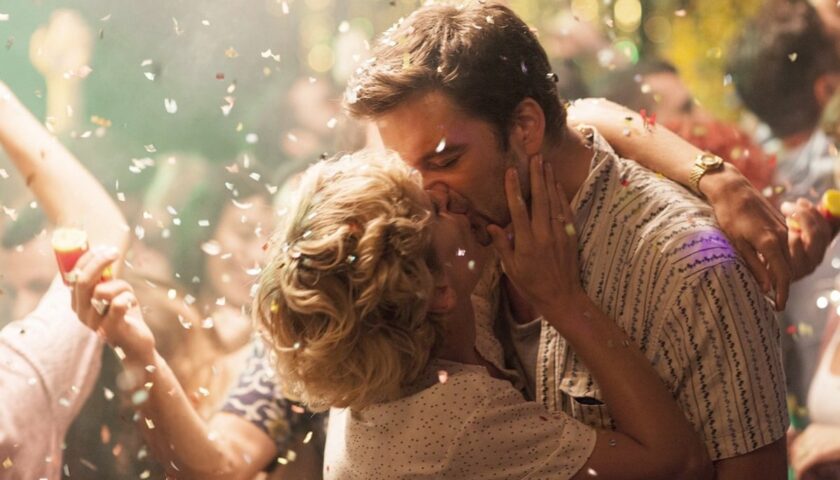 Four years ago, the Greek film-maker Argyris Papadimitropoulos made a vivid impression with Suntan: a bleakly hilarious Death-In-Venice-type affair set in a seaside resort, featuring a sad middle-aged man who tortures himself with his tragic infatuation with a beautiful young woman on holiday.

Here is his follow-up, in the English language, featuring Sebastian Stan (Bucky Barnes from Marvel’s Captain America movies) and the Irish stage star Denise Gough, with a script co-written by the director with the award-winning British dramatist Rob Hayes (who worked with Michaela Coel on the TV comedy Chewing Gum). Sadly, despite all the talent involved, this is a disappointment: an unconvincing, undeveloped and emotionally directionless non-drama that just goes pointlessly around and around in circles. All of this film’s various moods – erotic, euphoric, tragic – are unearned and despite what is clearly strenuous effort from the performers themselves, the acting is hammy and undirected.

It is the story of a love-at-first-sight passion which has to face up to the tough reality of maintaining a relationship once the initial sexy rush is over: in other words, dealing with the “Monday” comedown following the “Friday” of carefree weekend partying. The movie is in fact pointedly divided into a series of sections each repeatedly labelled “Friday” leading to what is evidently to be the deferred “Monday” reckoning. But bafflingly, the relationship in question seems to be always facing terrible crises and brutal Mondays long before this, yet after some shouting and then some carefree laughing, the reset button gets miraculously hit. It is a story which seems to be weirdly without penalty, without emotional consequence.Advertisement

Stan plays Mickey, an American guy in a Greek resort who is earning a living DJing in clubs and composing ad jingles, living a bleary hedonist lifestyle but secretly concerned about the serious musical career he self-sabotaged back in the US and the fact that he never gets to see his six-year-old son from a previous relationship with a Greek woman. Then at a party, he meets Chloe (Gough), a smart, sexy American lawyer who is just coming out of a painful situation with an abusive man. The spark is dazzling. They have nonstop wild sex, leading to waking up naked together on a beach and getting arrested – but it’s all just swept up in the uproarious swirl of their passion. But then they have to deal with their demons: namely, the sinister man that Chloe left behind and the fact that Mickey still has to have a difficult conversation with his ex-partner to get access to his son – a conversation which he leaves to Chloe, like the emotionally avoidant guy that he is.

For me, this tense conversation between Chloe and Mickey’s ex-partner Aspa (played by Elli Tringou, who was the bewitchingly unattainable woman in Suntan) is the one moment in the film that truly comes to life. It is the one speck of grit in the oyster, the one scene where something seems to be really at stake, where things can happen with irreversible results. And so it proves – in a way. Aspa icily confronts Chloe with the truth about how lazy and selfish Mickey actually is, but seems to have taken stock of how serious Chloe is.

Everything but the kitchen sink is thrown into this film: parties, clubs, arguments, embarrassments, sex – and there’s even a full-on romcom rush to the airport. But I never got the impression of a genuine connection between the two stars. There was no chemistry. Gough works hard to make her role count, but she has not much to work with, and Stan is stuck with this exuberant, anarchic hipster role which reminded me weirdly of the cool Rat Pack guy with whom Alicia Silverstone has her terrible date in Clueless. The party feels like it’s over before it’s begun.