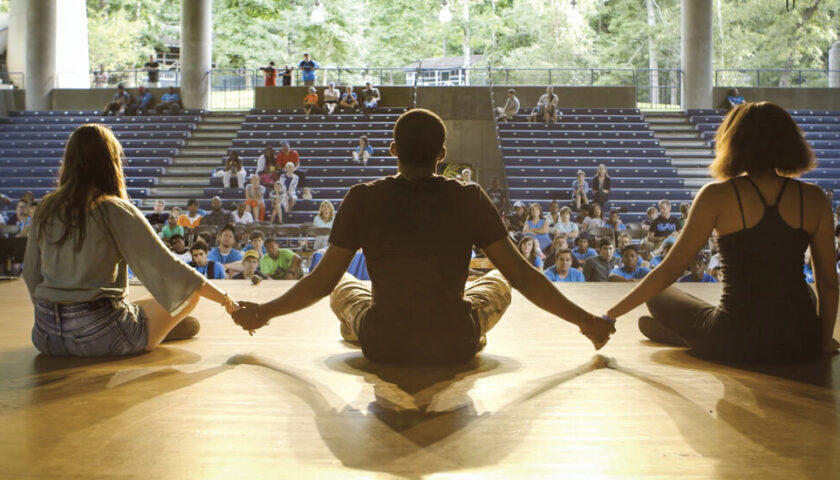 One of the most moving scenes in My Beautiful Stutter, a documentary now streaming on Discovery+, involves just a microphone and an open stage. Many of the attendees at Camp Say in Hendersonville, North Carolina, a getaway for youth who stutter hosted by the New York-based organization the Stuttering Association for the Young, grew up feeling broken or confused, ostracized by a neurological disorder that tangles the flow of fluent speech. Some campers recite poetry, others get through just their name before breaking into tears, all afforded the space to speak rarely given in the non-stuttering world (what can take a non-stutterer a minute to read or say could take a person who stutters 10 times as long). Tears abound; the scene hums with the bottomless human desire, felt most acutely as a teenager, to be seen, heard, loved, accepted.

Say, a non-profit founded by Taro Alexander in 2001, offers a soothing rebuttal to the campers’ internalized derision: you are enough. Your speech is beautiful. Take as long as you need. It’s a belief and normalization difficult to imagine as a child bullied for her stutter, said Julianna Padilla, 23, a former camper and now counselor. Now she can say confidently: “We’re not that much different,” she told the Guardian. “We’re like normal, average people, we just take a little longer to speak. We know exactly what we want to say, it just takes a little bit longer.”

Padilla is one of several youths from across the country featured in My Beautiful Stutter, directed by Ryan Gielen and executive produced by Paul Rudd and Mariska Hargitay, which follows campers and their families as they grow into Say’s mantra of self-acceptance. Some, such as Padilla and fellow high schoolers Emily and Sarah, reflect candidly on past pain and their journey toward embracing their stutter: Emily recalls schooldays being afraid to say her own name; Sarah, a soundbite machine, is a far cry from the girl captured, in heartbreaking home video, shifting awkwardly in silence as her classmates sing together. Others, such as Malcolm, age nine at the time of filming, are shy and lonely, struggling with feelings of unworthiness and slipping behind in school.

Almost all have a story of cruel bullying as a child that solidified their sense of being different, broken. It’s not always from other children – Padilla, who started attending Say workshops in New York City at age seven, recalled an elementary school teacher who mocked her when she stuttered through reading a book aloud. Assuming she was trying to be funny or disrupt the class, the teacher banished her to the hallway. Frustrated and confused, she began to speak less and less. “I did not want to speak to anybody, just to mask the fact that I stutter,” Padilla said. “I just remember being so, so sad and being so done with anything involving my speech.”

Stuttering is a neurological disorder in the production of speech that affects roughly 70 million people, or about one in 20 children, nearly twice as many boys as girls. It typically presents between ages two and four, and though some children grow out of it, the chances of fully losing a stutter decrease with each year. Many will face bullying, stigmatization and daily indignities ranging from assumptions of incompetence to impatient dismissals or interruptions. Some develop tricks or tics to avoid or mask their stutter, such as actor James Earl Jones and Joe Biden, but the psychological impacts of ostracism and silence as a kid can be lifelong.

There’s also few representations of stuttering in popular culture. Besides the Oscar-winning 2010 film The King’s Speech, which depicted King George VI battling his stutter to address his countrymen in the second world war, most depictions of stuttering tend toward jokes or derision. Padilla remembered being confused by the Porky Pig cartoon as a child – “that hilarious character who just could not get a word out”. There’s Adam Sandler teasing a stuttering classmate with “T-t-t-today Junior!” in Billy Madison, and the common social media quip “Did I stutter?” to add emphasis to a point not taken.

“There isn’t a lot of media that young people can look to to say OK, I’m not crazy, I’m actually OK. It’s the world around me that’s broken, not me,” Gielen, the film’s director, said. “I wanted to go out and create that.”

Gielen first began filming in 2015, after attending the annual Say gala in New York with Michael Alden, a co-producer on My Beautiful Stutter who produced the Broadway adaptation of The King’s Speech. At the time, Gielen believed he didn’t know anyone who stuttered. “I went 35 years believing I had never met anyone who stuttered,” he said. “And what I came to find out from making the film was that I probably did, but I either talked over them, or I ignored them, or I did something else passively to make their lives a little harder, to be a little less open for them.”

At the gala, Gielen heard directly from youth who stuttered about bullying and marginalization, experienced a “thunderclap, kind of life-changing moment” witnessing a young child speak and receive palpable, crucial validation rather than mocking. He left the gala fired up, “angry that there are young people all over the country who are dealing with this mistreatment, simply because the way they talk is a little different than the way I speak”.

He began filming Say events in New York, then filmed at the program’s camp in North Carolina, where he met kids and their families before settling on the five followed in the film, a group diverse in age, race, geography, socioeconomic status and family situation. “It was a very, very important that if you’re a young person who hears, ‘Wait a second, they made a film about kids like me?’ That when you turn it on, you can see yourself,” he said.

The project began in 2015 and stretched over six years – two for filming, two for editing, two on festival circuits and in distribution limbo. “Part of the challenge was finding enough money every few months,” said Gielen. “I think that speaks to people’s lack of awareness about the psychosocial impacts of being a kid who stutters. People didn’t really get how pressing a film or media like this is.

“The math is very simple: awareness equals empathy,” he added. “And there’s just not that awareness.”

My Beautiful Stutter traces the impact of that awareness – learning you aren’t the only kid who stutters, finding people like you – on young people who stutter unaccustomed to being heard, or given space. Malcolm, partnered with a high school camper named Will, goes from downcast eyes to joking with fellow campers. The goal at Say, campers attest, is decoupling speech fluency with success and normalizing stuttered speech.

The difference, said Padilla, was “a complete 180” from feeling like people were “trying to cure me of this instead of helping me through the pain and all of the struggles I was facing”, to a boost in self-esteem, and even, by the end of high school, delivering a school-wide speech.

“I hope that people take empathy from this [film], Padilla said. “And if there is anybody out there who has made fun of anyone who stutters, I hope that this film changes their heart.”