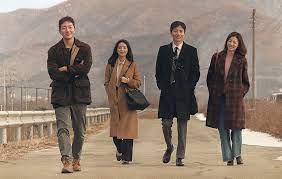 A slice-of-life drama, My Liberation Notes makes for a decent start. The first episode was out this week on Netflix, sharing a glimpse of what’s in store. The story revolves around three siblings, especially the middle sibling (Mi-jeong), who aspire for a better life.

The episode opens with Mi-jeong being coerced to join a club and if possible, find a date for herself. She manages to go bowling one night and later, never expresses an interest in joining a club as her residence is far away. The story and her character are quite relatable as it may remind one of their struggling days, travelling miles in different modes of transport to reach the office. It gets quite sad to also see her miss several things in life with her friends and co-workers due to the long distance she needs to travel to get back home.

At some points, the series reminds one of the Oscar-winning film, Parasite as it also deals with the core characters dreaming of a better lifestyle in a city. Though the first episode does not portray them as greedy, they do seem very anxious and are always seen bickering about their poor life, far away from the city. They live in a town that city dwellers are not even aware of.

The story can get slightly confusing with too many characters being introduced who yearn for some kind of freedom. They all seem lost, sad and lonely. One of the characters, which the story hints to be Mi-jeong’s love interest initially, is a divorcee with a kid. Even the kid seems really unhappy, making the audience wonder what could be possibly wrong with a nine-year-old. At one point, the show appears to be full of sad faces, which might be a thumbs-down factor for the viewers as it can be tiresome to just watch them.

The episode does not tell the complete story of each character and might seem abrupt at times. But it also makes it quite engaging. An important and interesting plotline of the story is the imaginary boyfriend of Mi-jeong, whom she keeps talking to in her head and keeps writing letters to. And the actor’s performance makes you feel sad and empathise with her even though it highlights that one can be happy only if they have a partner and money.

One of the highlights of the episode is its background score. It complements the visuals and tone of the narrative well. The drama revolves around the quest for love, longing, money and everything and anything that can make a person happy.

The episode ends with a cliffhanger moment, leaving viewers with ants in their pants, wanting to know what will happen next.

The first episode is more like a comfort watch and can help vent out. It leaves you thinking and yearning for solace. It isn’t that great and can be skipped if you are looking for just some light-hearted show.