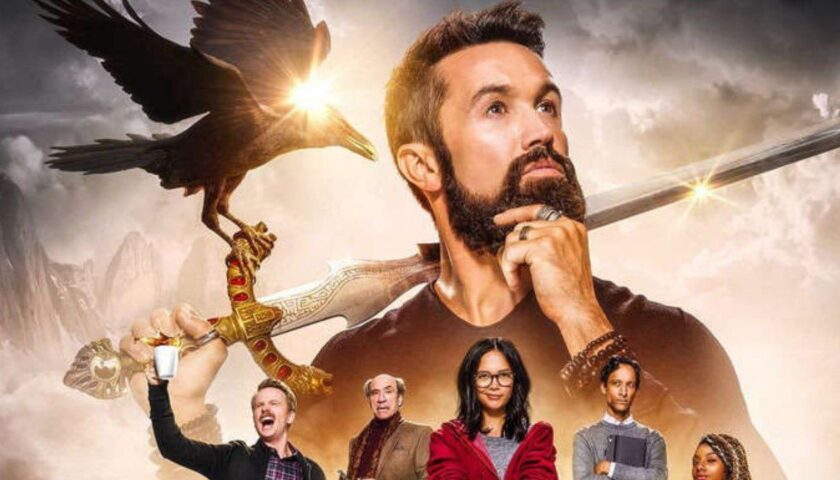 Two seasons in, and “Mythic Quest” is already destined to join the Saturday morning sitcom rotation — the kind of show, like “Parks and Rec,” “Superstore,” and, yes, “The Office,” that you can dial up for a quick hit of humor over breakfast, or a lengthy background binge while getting a jump on weekend chores. If it’s the latter, you have to be careful not to lose half your day to the quick-witted tomfoolery and admirable ambition of these charming video game developers. Inevitably, you’ll stop and admire one or two choice scenes per episode; the moments you just have to see again, even if it means taking a bit longer on the dishes, and even it means risking never finishing them at all.

I say “again” because, of course, first-time viewing earns first-screen priority — only-screen, really. But once-through won’t be enough, at least, if you’re anything like me. Once Apple TV+ shared a few screeners of Season 2 back in February, I re-watched Season 1, off and on, until the rest of the new episodes were provided in April. Finishing Season 2 for the first time just meant starting the whole series over, usually as I cleaned up the apartment or made the morning coffee — and a half-hour (or two) of “Mythic Quest” always gave me a more lasting jolt of energy than even the best cup of joe.

So I envy you, dear readers, for getting to experience “Mythic Quest” anew over the next few months. While weekly sampling may prove frustrating when all you want to do is live in their world for as long as you can, Rob McElhenney, Megan Ganz, and Charlie Day have crafted an Apple TV+ ensemble comedy so carefully, building strong arcs for each character and dropping clever callbacks throughout nine new episodes, it’s absolutely worth appreciating each entry individually (while you still can). After all, as more and more entries roll out, you’ll be consuming them continually for God knows how long.

Be it Apple or the creators, someone behind “Mythic Quest” seems to understand its addictive qualities. Since Season 1 released its last episode, “Blood Ocean,” in February 2020, the series has found a way to get two additional half-hours out before this week’s Season 2 launch — as if it’s trying to blend the quality of streaming series with the year-round consistency of broadcast TV comedies. The “Quarantine” special earned rave reviews for its double-pronged catharsis: Making anything during lockdown, let alone something good and funny, offered blissful respite during trying times, and the tender connection built between Poppy (Charlotte Nicdao) and Ian (McElhenney) sweetly acknowledged the relatable struggle of self-isolation. Then, just a few weeks ago, the “Everlight” episode helped transition the show back to work in a way real-world companies should strive to emulate: with compassion and kindness above all else.

The entry also transitioned “Mythic Quest” back to its best self: an in-person office comedy. Zoom banter only goes so far, and with a cast this talented, you have to bring them together and let the magic happen. By putting the pandemic in the rearview, Ian and his new co-creative director Poppy can work through their power struggle one-on-one, comically peeping through office windows, trying to outfox one another by coming up with the next brilliant idea for their video game. (Nicdao is especially skilled at playing the frazzled foil to Ian’s over-confident narcissist. She turns Poppy’s huffy, “can’t help myself” honesty into a self-generating comedy engine, repeatedly throwing her anger at Ian’s uncaring facade only to let it bounce back to her and build beautifully from there.) Similarly, the series’ central couple — Dana (Imani Hakim) and Rachel (Ashly Burch) — can make their own fireworks as they navigate the tricky waters of an office romance, while Brad (Danny Pudi) and his new assistant Jo (Jessie Ennis) walk the fine line between perfect partners and mortal enemies, as each self-perceived “shark” goes to great lengths to prove they’re the most cold-blooded mover and shaker in the company.

After a season introducing the cast and trying out different dynamics, Season 2 sees the writing team pulling almost all the right levers. Pudi, a versatile actor whose range is more often seen from project to project than within one role, gets stretched to thrilling extremes in Season 2, as Brad’s hidden layers spill out. David Hornsby, another “It’s Always Sunny in Philadelphia” actor/writer/producer who’s again pulling triple duty on “Mythic Quest,” hones his ineffective boss man David Brittlesbee to a fine point — pathetic, endearing, yet not too much of either, David is the bumbling, high-powered white guy whose impotence lets us laugh at him and, sometimes, with him. Episode 2, “Grouchy Goat,” puts Poppy through a lesson in leadership and deftly acknowledges the necessity and frivolity of superficial inspiration when it comes to being a good boss. Episode 5, “Please Sign Here” is both a bottle episode bringing the full cast together in one room and a key set-up for the season’s endgame, which, when it arrives, shows just how many big swings this surprising sitcom is willing to take.

Not every bold move pays off. Like Season 1’s standalone episode “A Dark Quiet Death” (which stars Cristin Milioti and Jake Johnson as game developers driven apart by success), the sixth entry in Season 2 travels back through time to explain how C.W. Longbottom (played by F. Murray Abraham in the present and Josh Brener in the past) won his Nebula Award, which in turns sets up the seventh episode where C.W. is reunited with an old friend (played by William Hurt). Great casting and strong performances can’t make up for rather predictable and unpleasant plotting, both of which stand in contrast to the inventiveness and exuberance driving the show’s traditional office-set entries. Jumping into a new plot with mostly new characters may be surprising in and of itself, but it’s also a stumbling block when each successive episode with the main cast creates the kind of propulsive chemistry you can’t stop watching.

“Mythic Quest” more than makes up for the lull with its final two episodes, sending audiences off on such a high that their recourse is to start over from the beginning. With any luck, some day soon there will be 50 or 60 episodes sitting in wait for our Saturday morning enjoyment. By then, those few off entries will be but a blip, and maybe they’ll even gain greater purpose. Either way, experimentation should only be encouraged when it comes to “Mythic Quest”: They’ve already tapped into the kind of magic that makes for invaluable TV.