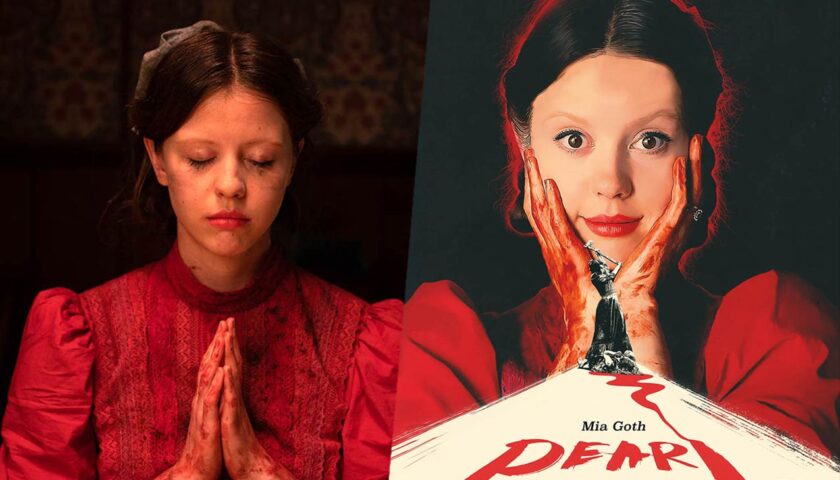 Well, it was certainly an economical choice. When Ti West made his return to horror filmmaking with this spring’s “X” — a gritty, grimy porn slasher that leaned hard on its ’70s vibe — the director behind such indie horror gems as “The House of the Devil” and “The Innkeepers” didn’t skimp on the blood and guts, offering up too much to (literally!) fill out just one film. While “X” boasted an eclectic and exciting cast, featuring everyone from Jenna Ortega and Brittany Snow to Scott “Kid Cudi” Mescudi and Martin Henderson, eagle-eyed audience members clued in early to its real casting trick: Mia Goth in a delightfully dark pair of different roles, including a particularly murderous one that buried her under gobs of old-age makeup.

Two for the price of one? Talk about indie ingenuity. But West went even further, not just casting a remarkable Goth in two roles, but two entire films. Unfortunately, one is far better than the other, and as West and Goth attempt to reverse-engineer a psycho killer’s bloody backstory, they diminish both “X” and “Pearl” in the process.

Soon after the film’s SXSW premiere, West and Goth revealed that, while making “X” in New Zealand during the early days of COVID-19 quarantine, they had also made a prequel to “X” that focused on the origin story of Goth’s older character, Pearl. If “X” is West’s love letter to ’70s-era exploitation films and indie porn, “Pearl” is an unholy ode to Technicolor fairy tales and the corrosive power of Hollywood, even in its earliest incarnation. Set in 1918 — toward the end of World War I and smack in the middle of the Spanish flu epidemic that infected one-third of the global population — “Pearl” attempts to fill in the blanks of Pearl’s backstory, a compelling enough idea that’s soon at the mercy of a rickety screenplay that’s both beholden to “X” and determined to be its own thing.

We open on an idyllic Texas farm, Technicolor bright, blazing with color and promise. It’s a far cry from the foreboding locale of “X,” a dusty wasteland in which nothing but resentment seemed to grow. Pearl, last seen (spoilers for “X” ahead, though no one should be reading up on “Pearl” without having seen its predecessor) splayed out and broken and smashed wide open outside her house of horrors, care of final girl Maxine (also, of course, Goth), is back to being young and fresh, full of hope in a world that we already know won’t answer any of her dreams.

Before young Pearl can finish swanning about her bedroom in a lovely gown, the lights come crashing down (literally and metaphorically), and we’re suddenly thrust into the reality of her being: she’s stuck on a hardscrabble farm, her husband is serving his country somewhere hellish, and her only company is her stern German mother (Tandi Wright) and an infirm father (Matthew Sunderland). As we learned in “X,” young Pearl dreamed of stardom — a major movie buff, she was convinced she was destined for the limelight, determined to somehow break into Hollywood by way of her dancing, which we’re never entirely sure is very good or not — but “Pearl” makes plain just how out of reach that dream really is.

But what was in reach for the wild-eyed farm girl? Less explored than her out-there dreams of stardom (but far more interesting) is Pearl’s growing awareness that she might be losing her grip on reality, or at least that she’s not experiencing reality the way others do. Indeed, she is different, but not the kicky, fun kind of different. Unease blooms in the film’s first act, though much of it is due to West leaning too hard on winks and nods to “X,” lingering over places and spaces (the driveway, the front steps, the basement) that served as killing fields in the first film and lustily eyeing up weapons (the film’s wood axe practically deserves top billing) that will, decades later, kill off so many of the stars of “X.”

But what about the stars and story of “Pearl”? If the film’s first act is beholden to reminding its audience what they loved about “X,” its final act zooms too far out to remind anyone why they loved the first film and why they might love this second one. West has indicated that he is already hard at work on a third entry in the series, one that would be inspired by a different filmmaking era and likely sew up the many loose ends left dangling from “Pearl,” and he’s got his work cut out for him. It’s a classic prequel problem, as West attempts to balance the old stuff with the new, and comes up short on both ends.

At least there is the film’s second act, which marries the dueling spirits of the rest of the feature, finding something giddily dark and dirty in the process. Pearl loves nothing more than going to the pictures, and when a handsome projectionist (David Corenswet) catches her eye and invites her back to the movie house whenever she wishes, it sets into motion many events and emotions that will forever change her. We learn little about The Projectionist — hell, not even his name, he’s simply listed by his profession in the film’s credits — beyond his affection for dirty movies and the pride he feels in being a so-called “bohemian.” He’ll make an excellent mark.

Not that Pearl even knows that’s what she’s looking for, as Goth guides her through the paces of fully cracking up with crackling ease. Goth commits fully to Pearl — both in “X” and this new prequel (the actress also has a screenwriting credit on “Pearl,” her first) — and if anything keeps this shaky prequel even remotely on track, it’s the full force of Goth’s dedication to the part.

But while she is doubtless an extraordinary performer, her talent often goes unchecked in the film. For every scene of her flipping out and burning through the screen, there’s a fussy, over the top corollary that follows on its heels. Nothing is as impressive as Pearl’s heart-stopping reaction to a pivotal dance audition, a raw and unfiltered sequence of truly bonkers proportions, but soon enough, West and Goth get bogged down in a laborious one-take sequence that mostly amounts to “Goth goes nuts, and then goes nuts again and again and again.”

It’s an impressive feat of filmmaking, but one that reveals nothing new, a major misstep for a film seemingly dedicated to doing just that. What’s the point of a prequel? We already know everything we need to about Pearl, but somehow, it feels less satisfying than we last left her, broken and bloody and crushed, but at least wholly original.