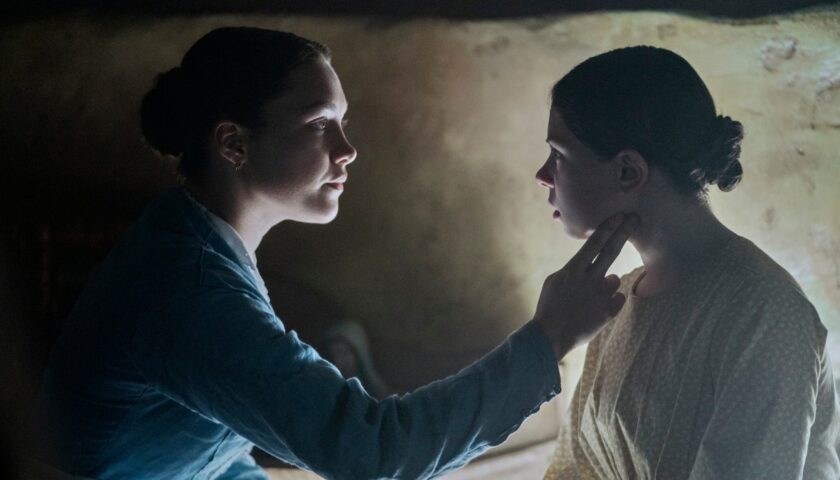 Considering that Sebastián Lelio’s “The Wonder” is a religious mystery (of sorts) set in the Irish Midlands circa 1862, the first shot of the film is so wildly unexpected that audiences might fear that the projectionist has played the wrong file. We open, not on the foggy moors of a country still reeling from the Great Famine that had starved it to death some 13 years earlier, but rather in the cavernous space of a modern soundstage — the kind of facility that might house the sets for a period drama like this one. It looks more like a logo of a production company than it does the opening image of a movie. Only when a disembodied Florence Pugh starts talking to us over the soundtrack are we able to make sense of what we’re watching.

“Hello,” she says with a comforting softness, “This is the beginning of a film called ‘The Wonder.’” At this point, I half-expected Pugh to channel Traffaut’s “Fahrenheit 451” and read out the full credits — to announce that the sumptuous but slightly undercooked tale we’re about to see has been adapted from a 2016 novel by “Room” author Emma Donoghue, and features Tom Burke playing against type as a well-meaning journalist whose delicious muttonchops threaten to swallow his entire face — but her voiceover soon proves to be less interested in details than ideas.

“We are nothing without stories,” Pugh continues, “so we invite you to believe in this one.” Then Ari Wegner’s camera swivels around to find the actress sitting in a set made to look like the interior of a boat, and with nothing but a push-in and a splash of water through the floorboards the illusion is complete. Belief, we’re viscerally reminded, can be transformative.

It’s a gambit more compelling than much of the film that follows, but also one that enriches it; it tells you where to focus your attention when no-nonsense English nurse Lib Wright (Pugh) arrives in Ireland to witness the miracle child Anna O’Donnell (newcomer Kíla Lord Cassidy), an 11-year-old girl in good health who supposedly hasn’t eaten anything for more than four months. Lib has been summoned to the Midlands by an impeccable phalanx of Irish and British character actors (including Ciarán Hinds and Toby Jones), who’ve hired the nurse — and a nun along with her — to watch Anna around the clock for two solid weeks, in the hopes that this tag-team of observers might determine the validity of her claim. Between a woman of medicine and a woman of faith, the local patriarchy looks forward to getting a clear answer they can immediately ignore because it came from two women.

If not for that odd framing device, you might have reason to see “The Wonder” as a story in which saints and scams are mutually exclusive, but the introduction filters the entire film through a lens that refracts it into a story that has nothing to do with God, and everything to do with belief. At no point does Lib seriously entertain the idea that Anna might actually be fed by “manna from heaven,” and at no point does Donoghue’s script — co-authored by Lelio and “Lady Macbeth” writer Alice Birch — reduce the plot to a cheap parlor game. But the fact that there’s no magic at work doesn’t necessarily mean that a miracle can’t occur.

“The Wonder” is rich with small examples that serve an even greater one. They begin with the film’s ultra-evocative look and design, which needs only a handful of (admittedly fake!) locations and a few Caravaggio-like shots of Lib skulking around the village inn to paint a vivid picture of grief and despair. Everyone we meet is attended to by one or more ghosts from the famine, and so it’s no wonder that people would be eager to believe in the rumors of a girl who doesn’t need to eat.

Matthew Herbert’s strange and ingenious score, filled with loud whacks of percussion and wisps of ascendant human voices, adds to the sense of being surrounded by lost souls; so do the white flecks that flicker like fireflies across Wegner’s Andrew Wyeth-inspired visions of the moors, the result of transmutating her digital footage onto celluloid film before scanning it for the color grade. Anything seems possible — except for when Lib is watching over Anna, and the unmistakable reality of a simple child being coerced into nonsense by her desperate mother (played by Elaine Cassidy, Kíla Lord Cassidy’s actual mother) clicks back into focus.

Steely as ever, while still allowing Lib a tragic undercurrent of her own, Pugh is excellent in her scenes with the younger Cassidy, but there’s a gear missing from the time these characters spend together. Where there should be a measure of tension between the nurse’s doubt and her subject’s unwavering belief, instead there’s only a fussy mix of secrets and pity. Even the hot and heavy relationship that Lib rushes into with Burke’s leery journalist — sad and sweet and even a little bit funny for how it betrays a mutual need for expiation — struggles to escape the shadow of the ideas that it’s meant to represent. Impressive as it is that “The Wonder” is able to squeeze so much from its spartan trappings, the film still feels clipped at 110 minutes; there may not be a lot to chew on, but there’s almost too much to savor.

It’s only in the last third of the film, once all the cards are on the table, that “The Wonder” is truly able to reach for the divine while delivering on the terms that it sets for itself at the outset. Religion may be no different than any of the other stories we tell ourselves in order to survive, but it can be uniquely indicative of their power over us. And, by extension, it can also be instructive as to the power they give us over ourselves in return.

When one of the characters in this story laments believing someone who told her that “love is forever,” there’s no mistaking how that belief was strong enough to bridge the gap between heaven and hell. “The Wonder” often skims along the surface when it should cut deeper, but the film’s obviousness only holds it back for so long. By the time it reaches its final shot — inevitably closing the clever parenthetical opened by its first — you just might believe every word of it, too.