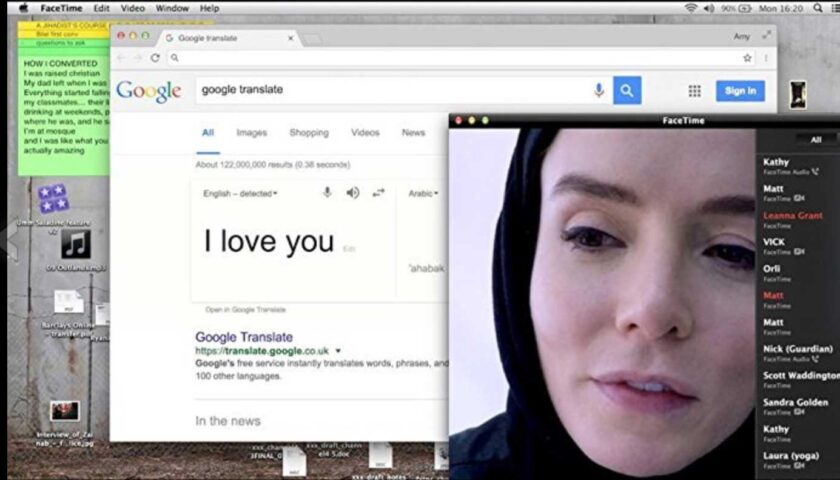 The best and most harrowing addition to the quickly growing sub-genre of movies that take place entirely within the space of a computer screen, Timur Bekmambetov’s “Profile” brings a new and much-needed dimension to its conceit by using it in the service of a semi-realistic story. That’s uncharted territory for a type of filmmaking which — like so many cinematic innovations before it — was born out of shlock. Asinine early attempts like Nacho Vigalando’s “Open Windows” suggested that a degree of absurdity was required to justify the aesthetic, while “Unfriended” (which Bekmambetov produced) was only willing to trace the connection between digital relationships and real-world consequences to a certain point; what began as a cautionary tale about online bullying ended as a supernatural horror story about a Skype-loving demon.

“Profile” is different. While nobody is ever going to confuse the movie for a documentary — making for at least one degree of verisimilitude that traditional “found footage” cinema has over its web 2.0 successor — Bekmambetov’s latest is strictly grounded in the dystopian grime of the social media age. This is the first of these films to recognize that the internet is already scary enough; that the boogeyman doesn’t need to hide under the bed or jump out of the shadows when he can just slide into your DMs.

“Profile” isn’t only realistic, it’s based on a true story. More of a techno-thriller than anything else (though it does have a handful of truly shattering jump-scares), the film takes its cues from the account of a French journalist who made Facebook contact with an ISIS recruiter named Abu Bilel in order to investigate the secret underworld of jihadi war brides. Bekmambetov, of course, is only so beholden to the facts; after all, this is a guy whose idea of a historical biopic is “Abraham Lincoln: Vampire Hunter.”

In his version, the journalist is a British freelancer called Amy Whittaker (Valene Kane, like a tetchy Rose Byrne) who’s scrambling to pay her share of the rent on the London flat she shares with her insufferable fiancé (Morgan Watkins). Desperate for an assignment, she pitches her editor a piece so extreme that it almost feels like a withering comment on the perversity of the gig economy: She’ll pose as a recent Muslim convert who dreams of becoming one of the Real Housewives of Raqqa — the kind of social outcast who’d move to Syria if she felt like she might belong there — and catfish the same guy who recently lured a baby-faced British girl to her death. Amy’s editor, who might just be the most ridiculously irresponsible movie editor of all time, seems to think that’s a great idea.

And so, roughly 11 seconds after she first had the idea, Amy creates a fake Facebook page for a “Melody Nelson” and starts sharing gruesome ISIS propaganda off Abu’s page. Roughly 11 seconds after that, Abu is blasting her with instant messages along the lines of, “hey girl, u wanna come terrorist and chill? promise u won’t be a sex slave who gets stoned 2 death when she inevitably tries to escape lol.” Crying emoji. Cat gif. etc.

Just like that, Amy has gone deep undercover without leaving her kitchen. She throws on a headscarf, sets up a screen-share with the Syrian IT guy from her office, and starts juggling Skype calls with an incredibly dangerous terrorist with the YouTube videos she’s streaming for help and the friends she’s texting about the mundane events of her actual life. The infinitude of the information available to her is on full display, as is the extent to which a digital life can quickly acquire the full dimension of a corporeal one.

Amy is a terribly reckless journalist (and a caricature of a hungry millennial), but this is her lucky day: Not only is Abu thirsty as hell, but he’s candid and charismatic and he seems to take a personal interest in her case — he doesn’t just want “Melody” to come join him in Syria, he wants to marry her himself. And it’s easy for Amy to play along, because Abu is kind of a dreamboat, in an “death cult pyramid scheme” kind of way. He runs the “cats of ISIS” Instagram account, for goodness sake.

Played by an unsettlingly charismatic Shazad Latif, Abu is a shifty and compelling figure. As he and Amy begin Skyping at all hours of the day (even cooking traditional Syrian meals together), the validity of their feelings for one another grows engagingly unclear, becoming the biggest question marks of a movie that’s never short on suspense. Is Amy in too deep, or is she just selling the illusion? Can Abu be isolated from his ideology, or does he personify the ways in which ISIS is just an unprecedentedly violent expression of toxic masculinity?

The answers to these mysteries are mighty predictable (a fact that Bekmambetov tries to obscure by reaching them through a string of silly plot twists), but “Profile” nevertheless sells us on how seductive these interactions can be — when applied strategically, small doses of empathy and attention can make good people do very bad things. Even at its most absurd, the movie is chilled by an ominous and ever-present feeling that the world has become smaller than we ever thought possible, and that real nightmares are waiting for us on the other side of every window.

For that reason, “Profile” is one of the only films that will be a categorically superior (and taxonomically different) experience when watched on a computer monitor rather than a movie screen. Bekmambetov, who’s never seemed comfortable with conventional modes of storytelling (or even capable of understanding them), has crafted a piece of 21st century entertainment that exploits how people interact with media today — how lateral communication has become and how actively we have been conditioned to engage with it.

Seen in theaters, “Profile” simply indicates something we all know to be true; watched on a laptop, and it inspires you to instinctively click on Amy’s Skype windows, as though the movie is being shared on your screen in real-time. That’s a terrifyingly immediate sensation, and one that points to a new kind of interactive storytelling in which a guy like Bekmambetov might be able to physically meld with audiences in a way that the worst of his previous work (“Wanted,” “Hardcore Henry”) has always wished that it could.