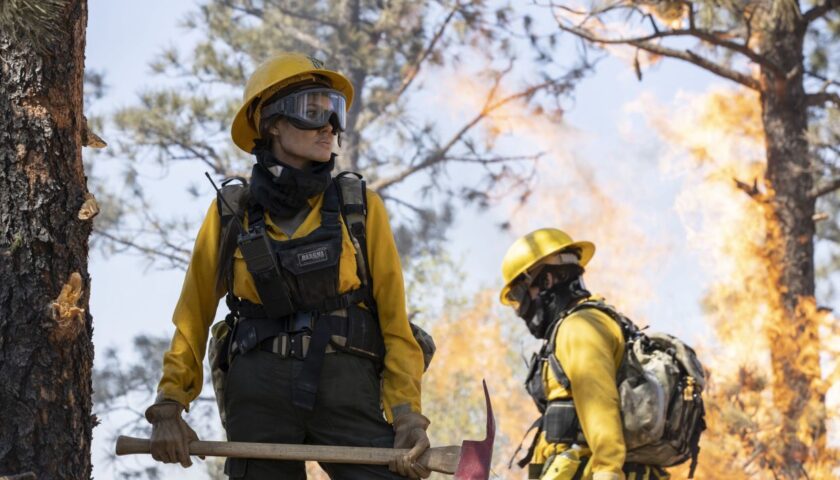 Those Who Wish Me Dead 2021 Movie Review Poster Trailer Online

While watching Those Who Wish Me Dead, the new thriller starring Angelina Jolie and Jon Bernthal, I couldn’t help but think back to the action movies I used to rent on VHS as a teenager. Back when Hollywood realized that action movies based around cops or soldiers were becoming stale and stated looking further afield for their heroes. When criminal’s plots would be foiled by Mountain Rescue Rangers (Cliffhanger), Skydivers (Drop Zone AND Terminal Velocity), and even chefs, if they had a particular sets of skills (Under Siege).

Those Who Wish Me Dead May may elevate the role of “Smoke Jumper” to action hero status but it also shares a lot of DNA with old action movies .

It’s got a got pair of ruthless, efficient killers who nonetheless have their own particular charm as villains. It’s got a plucky kid who’s on the run from said killers. It’s got an isolated community where that kid ends up, pursued by those killers, where a washed up hero with a unique skillset and a troubled past might just give those killers a run for their money.

Jolie plays Hannah, a troubled “Smoke Jumper” whose regular job is to parachute into remote forest fires and help get them under control (“a unique skillset”). Due to trauma from a recent forest fire (“troubled past”), she’s been grounded and assigned to a fire lookout tower for the summer. These towers are dotted across the American wilderness to keep watch for forest fires before they rage out of control.

While wallowing in self pity and switching between passive aggressive radio calls and soulful heart to heart’s on the satellite phone, Jolie’s Hannah comes across the blood covered Connor (Finn Little). He’s trying to escape from a pair of hitmen, Aidan Gillen and Nicholas Hoult, who are out to bury his father’s secrets, along with anyone who gets in their way. Also in the mix are local sheriff Ethan (Jon Bernthal) and his pregnant wife Allison (Medina Senghore) who run a local survival skills camp, and know Connor’s dad.

While Those Who Want Me Dead ticks all the boxes for an enjoyable action thriller, the wheels come off the whole thing almost immediately. The entire first 20-30 minutes of the movie is spent setting up completely unnecessary exposition that leaves less time for everything else. Considering that the film never outlines it’s central macguffin (what actual secrets the killers are suppressing), everything learned in that time could have been established the moment Aiden Gillen and Nicholas Hoult cross paths with Connor and his dad (the always reliable Jake Weber), leaving the film to play catch up with the time it has left. It doesn’t help that this time is also spent repeatedly establishing Hannah’s PTSD.

Despite Jolie’s top billing, she doesn’t really feel like the star of the film, as she waits in her cabin for the plot to arrive, while Jon Bernthal and Medina Senghore take a far more active role. As the heavily pregnant yet still ass-kicking Melissa, Medina Senghore is arguably the more interesting character.

I’ve not read Michael Koryta’s book, upon which the film is based, but I’m pretty sure he did enough research to know that fire lookout towers have to be protected from lightning strikes, seeing as they’re the tallest structure around for miles. Hence it feels utterly contrived then when a lighting strike takes out Jolie’s radio, which is the whole point of the tower in the first place, and results in a pointless mini action set piece.

It’d be one thing if the injuries sustained by Hannah from this were to tie into her character development over the course of the film, but in Those Who Wish Me Dead she has no real arc to speak of. She moves from sad, to slightly more happy. That’s not an arc, that’s a straight line.

When lightning plays a part in yet another major set piece soon after, it starts to feel like the weather just hates Hannah.

If I seem overly harsh it’s because there seems to be so much wasted potential here.

Gillen and Hoult are suitably creepy, but entertaining, as scarily precise killers. Jon Berenthal’s likeable Ethan has shades of his breakout role, Shane, from The Walking Dead, before everything went to hell for that character. As mentioned above, Medina Senghore fills the action heroine role far better than Jolie, and Finn Little has some great emotional and funny moments with the rest of the cast.

But then there’s a scene where Connor meets a horse on the side of the road (before he gets to the woods). What was the point of that? That he recognizes the good in people? That might be useful if he’d met anyone apart from Jolie for the rest of the film, but he doesn’t. In fact, he runs away from Hannah at first because she looks like a mad woman in the woods.

Likewise, a pointless cameo by Tyler Perry as Gillen and Hoult’s boss goes nowhere and adds nothing to the film. At one point, Hannah engages in a drunken stunt involving a parachute and a speeding pickup truck, that only serves to reinforce how messed up her character is, for the third or fourth time. This felt like it could be an interesting set up for an action set piece later, but Hannah’s skydiving expertise never comes up again.

Like Without Remorse, the other book adaptation featuring script work by Taylor Sheridan out this week, the bones of a smarter, more entertaining movie occasionally peek through the skin of Those Who Wish Me Dead. It’s refreshing to see a thriller realise that no matter how badass a smoke jumper is, no civilian would be a match for trained professional killer. The fight scene that ensues is realistically brutal, and smart, but feels adrift in the rest of the film. Switching villains from the all too human hit men to the roaring beast of a raging forest fire mid film could also have been a really entertaining twist, but here it feels utterly inevitable.

Perhaps without Jolie, and more time spent with the other characters in the woods, this could have felt like a more surprising ensemble piece, but as it stands, Those Who Wish Me Dead Feels like a curiously old fashioned thriller where no one learns anything except “creeks lead to rivers, and rivers lead to towns.”

Those Who Wish Me Dead 2021 Movie Review Poster Trailer Online