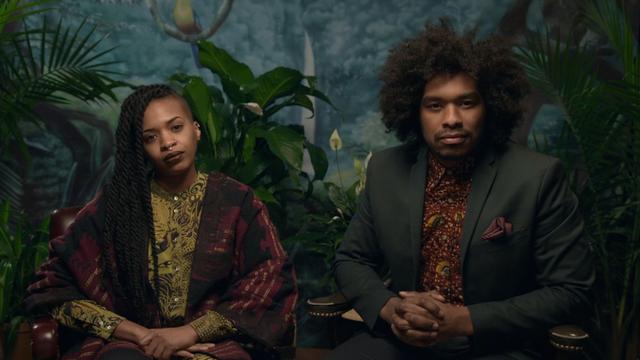 Review: It was initially hard to understand what HBO meant when it first described “Random Acts of Flyness” as “a fluid, stream-of-conscious response to the contemporary American mediascape.” But it becomes clear exactly what that means barely two minutes into the series, a surreal shapeshifter that defies categorization with every (purposefully) jarring cut.

Under creator Terence Nance’s watchful and discerning eye, “Random Acts of Flyness” stitches everything from found footage, to satirical skits, to interviews reenacted through stop motion animation together with beautiful cinematography to create a sort of televisual collage. Together, they all reveal incisive truths about what it means to be black in America — or actually, “reveal” isn’t quite the right word, and neither is “show.” Instead “Acts of Flyness” wants to make its (white) audience feel what it means to be black in America.

A cartoon details a possibly dangerous scenario in which a black man accidentally gets into the wrong car, and has to assure the scared white woman that she doesn’t, in fact, need to call the police. A segment filmed like an old children’s program is called “Everybody Dies!” starring Ripa the Reaper, a leering woman who stares into the camera and sings cutesy songs about the constant, justified fear of death. A storyline filmed as a vertical iPhone video of Nance riding a bike and ending up in an almost wacky chase with a winded cop contrasts with very real clips of police brutality against black people filmed in exactly the same way. Neither unfolds in a linear fashion, because that’s not how these things work in reality, either. In these moments, it almost feels like the show is set at a tilt, its images visceral and strange and searing.

But “Random Acts of Flyness” doesn’t want to act as some grand education on race for the benefit of white America. In fact, its premiere episode makes a point of stopping the show from being exactly that halfway through. At the tail end of an elaborate infomercial sketch about the potential danger of “white thoughts” — or as guest star spokesman Jon Hamm puts it, “Albinitis” — the show interrupts it with a sharp cut to Nance getting a text while editing that sketch, which suggests that maybe, just maybe, they should “address whiteness less, and affirm blackness more.” He looks at the text and nods, sending the show into a much different (but no less relevant) world that allows blackness the room to breathe and examine itself outside the context of who’s oppressing it.

There’s so much to look at and feel while watching this show that it can sometimes be overwhelming — which, of course, is the entire point. It can be chaotic as it careens from one thought or medium to another, but it’s never random. It’s meticulous with its choices, designed within an inch of its life to confront its audience and make it pay attention. And even when “Random Acts of Flyness” is hard to stare at directly, it’s always worth listening to what it has to say.