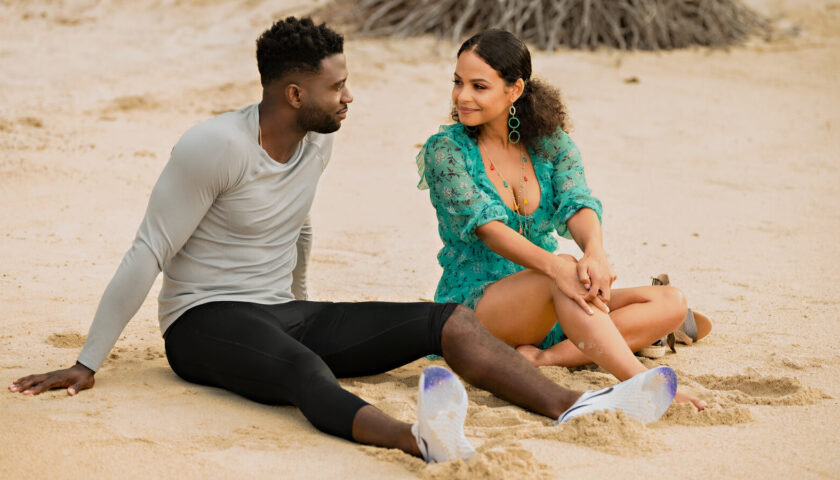 After two major setbacks in a year, Erica (Christina Milian) is reeling. First, her fiancé (Jason played by Jay Pharoah) dumped her for a corporate promotion in another city. Second, the album that was supposed to launch her career was destroyed by the temperamental lead performer. Despairing and despondent, Erica is lying dry-eyed on her BFF’s couch as she contemplates the wreckage of her dreams.

Luckily, Erica’s bestie is a pro-active person, and she quickly lines up a new job. After some faint protests, Erica finds herself working as a singer at a luxury resort in Mauritius, a tropical island in the Indian Ocean. The scenery is stunning and the work is agreeable, that is, until Erica learns that she’s expected to sing at weddings – and at one wedding in particular.

Erica is appalled to bump into Jason and his new bride-to-be, Beverly (Christiani Pitts), at the hotel. When Jason begs Erica to remain silent about their shared past to spare Beverly’s feelings, their complex emotions simply simmer underground. Luckily, Jason has a handsome brother, Caleb (Sinqua Walls), who just might help Erica move on from the past…

There are absolutely no surprises to be had in Resort to Love. To give the screenwriters credit, they try to maintain some suspense in the plot but it doesn’t hold as the story unfolds to its preordained conclusion. Many critics condemn rom-coms for their bland predictability but it’s not a bug; it’s a feature. Fans don’t watch these films for tension: they watch to escape from the stress of daily living. Watching beautiful people fall in love in equally beautiful locations is a coping mechanism that is certainly healthier and less anti-social than, say, drinking alcohol. So, if rom-coms are the way you unwind after a difficult week, you can relax in front of your TV and throw your cares away to the rhythm of the surf on the beach.

If you want to watch Resort to Love with teens, the biggest problem in the story is alcohol, which lubricates pretty much every social occasion and which characters use to drown their sorrows. The other issue is cleavage, which is displayed in abundance throughout the movie thanks to very low-cut clothing. Perhaps this is an attempt on the part of the director to expand the movie’s appeal from a traditional female demographic? For a movie that doesn’t show characters in bed, this one certainly manages to bare a fair bit of skin.

Despite these flaws, and some very uneven acting, this flick isn’t a dumpster fire. Resort to Love contains reassuring messages about second chances, forgiveness, and learning to live with uncertainty. It shows people overcoming challenges and honestly assessing their past behavior and future goals. While there are certainly more complex and sophisticated films out there, this one is harmless, heartfelt, and determined to provide a good time to its viewers. Rom-com fans can certainly do worse.Directed by Steven K Tsuchida. Starring Christina Milian, Karen Obilom, Sinqua Walls. Theatrical release July 29, 2021. Updated July 29, 2021