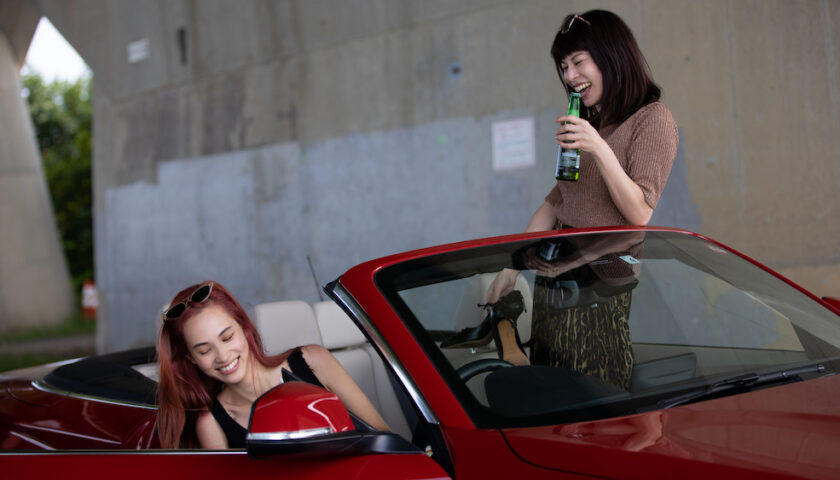 In the spirit of “Thelma and Louise,” a lesbian fugitive and the woman she’d kill for hit the road with three stilettos and a blood-red BMW in “Ride or Die.” A glammed up, erotically-charged cocktail of amour fou and true romance directed by Ryuichi Hiroki and written by Nami Kikkawa, the Netflix production gives agency to full-blooded female protagonists. That’s a rarity in Japan’s studio-dominated, cookie-cutter entertainment industry, which explains its liberating, inexhaustible energy.

Based on the adult-skewing manga “Gunjo” (Ultramarine) by Ching Nakamura, the film stars actor-model Kiko Mizuhara (“Norwegian Wood”) and actor-musician Honami Sato. The two celebs’ graphic sex scenes and full-frontal nudity are bound to be a talking point in Japan, where managers usually exert such tight control over their actors’ public image they forbid anything risqué. Given such a system, the audacity and ardor Mizuhara and Sato generated on screen prove their commitment.

In another break with Japanese industry conventions, whereby screen adaptations must follow original sources to a T, Kikkawa got the greenlight to make significant changes, such as making this a road movie. The two protagonists, who are anonymous in the manga, and simply referred to as “Les-san” (Ms. Lesbian) and “Megane” (Glasses), are given proper names. The Japanese title was changed to “Kanojo,” denoting both “she” and “girlfriend.”

In a subversive variation on the femme fatale mode, stunning Rei Nagasawa (Mizuhara) sashays into an elegant bar on lethal-looking stilettoes, and buys the man sitting next to her a drink. His response is instant, implying such assurance of his own irresistibility that he brings Rei home to his skyscraper suite, and has sex with her in front of his wedding photo with no qualms. With a smug flourish, he throws money at her as if women who come on to men are by definition whores.

The lurid culmination of this encounter might have accelerated into torrid genre territory in the reins of a different director, such as Sion Sono. But thereafter, Hiroki chooses to slow down and instead turn an attentive, sympathetic gaze to the two female protagonists’ history and convoluted feelings.

Rei is an independent plastic surgeon born of fabulous wealth, living semi-openly with lover Mika (Yoko Maki). Out of nowhere, she gets a call from Nanae Shinoda (Sato), a high school classmate she hasn’t seen in 10 years. She drops everything for a rendezvous with her, but becomes incensed after seeing Nanae’s bruises inflicted by her husband Kotaro (Shinya Niiro). It takes only a small nudge from Nanae for her to resolve to kill him.

Yet, when the deed is done, Nanae seems shocked that Rei took her incitement so literally. What complicates their relationship is Nanae’s adamant claim to be straight as a ruler. Nevertheless, she doesn’t abandon her friend, and the two go on the run together. Although the journey feels rather drawn out in the film’s 142-minute running time, and is strewn with one ear-splitting brawl too many, the mystery of each protagonist’s true intentions, and the unpredictability of their course of action, keep tensions on a continuous simmer.

Along the way, run-ins with controlling male behavior suggest there’s more for the two fugitives to run away from than the law. An episode with a taxi driver who quickly makes assumptions is so cynically observed it’s painful to watch. A similar tone-deafness is exhibited in Rei’s brother Masato, who despite caring motives, acts like he knows what’s best for women more than themselves. So when his no-nonsense wife Yu (Anne Suzuki, the lead of Hiroki’s “The Egoists”) finally puts him straight, it makes for the film’s most poignant moment.

The shooting was done in sequential order at the height of the COVID-19 pandemic, with lengthy flashbacks that trace Rei’s unrequited love for Nanae to their lives at an elite girl’s school. The pair’s burgeoning closeness on the road result in their dynamics shifting endlessly in intriguing ways. The dialogue’s repeated flirtation with the genre conventions of “shinju” (love suicide) throw in an element of suspense.

By the end of their journey, one might think that even though Rei, with all her money, could have found other ways to free Nanae from marital abuse, love is irrational and this might be her most personal way of expressing it. A pivotal sex scene rippling with trepidation and rapture, brings resolution to their dilemma, and is equally cathartic for viewers.

Mizuhara sinks her teeth into the role of her life with voracious zeal, but sometimes over-exerts herself doing ugly crying and freak-out yells. A drummer who performs under the name Ikoka Hona in the band Gesu no Kiwami Otome, Sato infuses Nanae with chameleon moods: prim and innocent in bookish specs, wild and carefree when speeding through country roads in her BMW convertible, and at other times, exceptionally desirable. Even so, Nanae isn’t invested with as many emotional layers as Rei and sometimes betrays a certain opacity. Their younger selves are played by Sara Minami and Yu Uemura, without leaving much impression.

Glossier than average production values and multiple shooting locations are all indications of Netflix’s financial clout. Cinematography by Tadashi Kuwabara, who worked with Hiroki on “Hibana” and “The Many Faces of Ito” as well as on Sion Sono’s series “Tokyo Vampire Hotel,” executes Hiroki’s signature love for long takes and gliding shots with style, particularly in driving sequences and intimate scenes composed of extended, extreme closeups that test the cast’s heft.