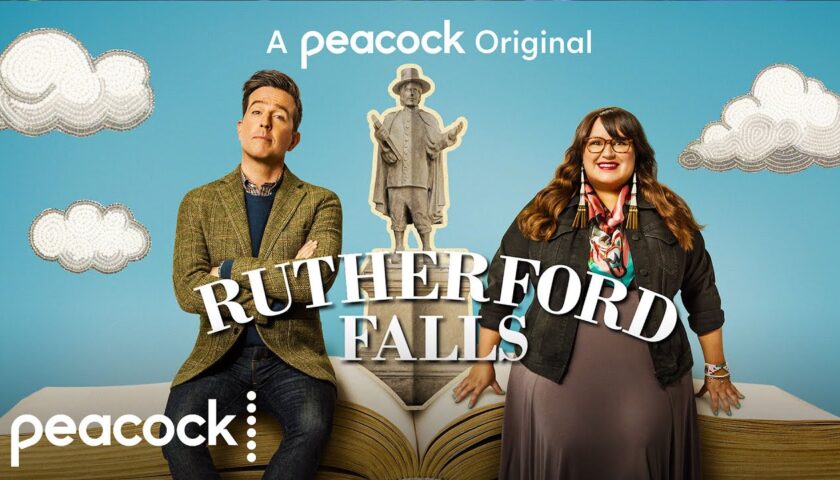 Ed Helms and Jana Schmieding star in co-creator Mike Schur’s Peacock comedy about a small town with a distinct historical identity and the Native American reservation next door.

The seed of Peacock’s new sitcom Rutherford Falls — set in a Northeastern town next door to a Native American reservation — emerged from conversations between Ed Helms and Michael Schur, but its spiritual origins may well have come from the comedy hitmaker’s Parks and Recreation, too. Like that earlier series, Rutherford Falls is a formally familiar show with a big, searching heart, that asks unexpectedly tough questions about how best to serve a community and foster a sense of belonging among its members. And like Parks‘ Leslie Knope, the two leads here are hopelessly earnest dorks: Helms’ Nathan Rutherford spends his days giving schoolchildren tours at the museum that commemorates his family’s founding of the town in the 17th century, while Jana Schmieding’s Reagan Wells wastes away manning the empty Minishonka cultural center inside one of the (fictional) tribe’s casinos.

Helms and Schur brought on eventual showrunner Sierra Teller Ornelas, a Navajo and Mexican American Brooklyn Nine-Nine alum, to create Rutherford Falls with them, and the trio assembled a writers room in which half the staff are Indigenous. “You just never see Indians on TV,” said Ornelas at the 2020 Television Critics Association press tour. “When you do, it’s one guy and he has to transform into a wolf or something.” Given the historical invisibility of Native Americans in media and entertainment, Rutherford Falls is the kind of show one immediately wants to root for — not only because of its representational aims, but because of its excellent Native supporting cast, its intellectual ambitions and its character-driven storylines.

But based on the first four episodes (the portion sent to critics), the series isn’t quite root-worthy yet. Rutherford Falls’ biggest pitfall is its saggy pacing — the pilot, which runs a (rather unfunny) half-hour, feels twice as long. There’s also both too much and not enough table-setting in these early installments. In a misguided attempt at historic preservation, Nathan is determined to fight the mayor’s intentions to move a statue of one of his forefathers so it no longer stands in the middle of the street where drivers keep crashing into it. Nathan is positioned for a clash with his bestie Reagan, who is taken under the wing of her scheming casino-manager boss, Terry (Michael Greyeyes, a highlight), who’s been lying in wait for the right moment to go after the Rutherford family.

But other than their dedication to their respective ancestors’ legacies, it’s not really clear why the overconfident Nathan and the mousy Reagan are friends at all — her amusingly snide coworkers (Julia Jones and Bobby Wilson, both hilarious) compare them to Tony Stark and Hawkeye. And because it’s hard to get invested in the show’s central friendship, the seemingly imminent rift between them is robbed of its urgency.

Diversity in storytelling isn’t just about new faces; it can also lead to fresh perspectives, novel stakes and unconventional characters. That’s the promise — but not yet the reality — of Rutherford Falls, which offers a portrait of a Native community, with all the heterogeneity that entails. A college-educated “city Indian,” as she calls herself, Reagan is an outcast among the Minishonka, though for reasons much more personal than she realizes. An even more compelling Native character is Terry, a born businessman and generous community leader who sees his monomaniacal pursuit of money and power as the most reliable way to ensure a future for his dispossessed people.

The bond between Nathan and Reagan is supposed to be the show’s heart, but the tenuous alliance between Reagan and Terry is easily its most engaging. Like Nathan, Reagan isn’t particularly liked by the people she wants to serve, while Terry enjoys a deftness around people but might not realize his ego is getting in the way of his leadership. The fourth episode, about Terry’s complicated backstory, is the best of the batch screened for press, bolstered by Greyeyes’ simmering intensity and mercurial versatility.

Rutherford Falls’ less familiar elements largely make up for its extremely low joke density, which becomes rather conspicuous when the show turns its focus on Nathan and his would-be profiler, the “centaur-hot” public radio journalist Josh (Dustin Milligan), who wants to make the titular town the subject of his next podcast about “the story of America.” Josh is so far just a tweedy archetype, but he commands the conflicted depths of Tony Soprano next to Bobbie (Jesse Leigh), Nathan’s cheeky yet inexplicably sycophantic nonbinary assistant. (Leigh is also nonbinary.)

Nathan isn’t quite a white entry-point character into a Native world — he’s much too flawed for that — but his more traditional storylines, like dealing with the foreboding board of his family’s company, do feel like unwelcome intrusions on a show that’s largely breaking new ground. Helms doesn’t bring much charisma or dimension to his character, either, though the themes Nathan is forced to contend with — e.g., how much pride he should take in everything his family has built, given their foundation in colonial exploitation — are certainly pressing and timely. Here’s hoping the remaining six chapters are a little less hopeless in their earnestness.