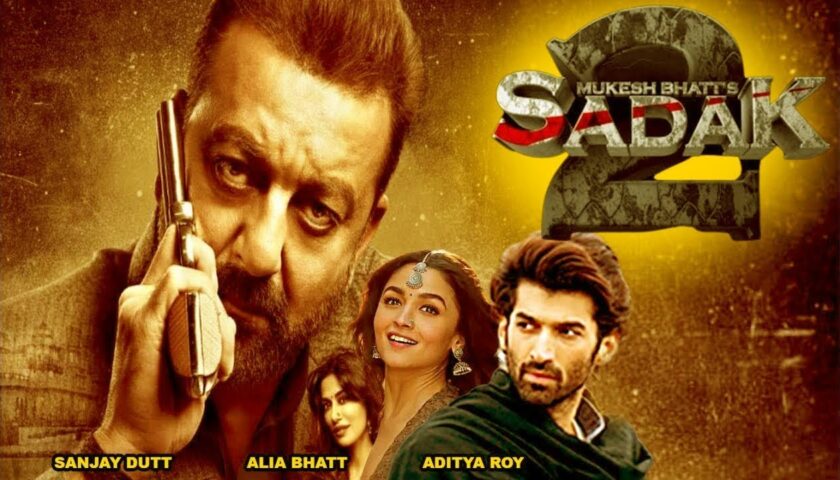 I tried to keep an objective perspective on this movie and the trailer really disappointed me but the film overall was so painful to sit through.

With all the controversy surrounding the Bollywood film industry, I try to stay honest and objective towards every film I see and believe me when I say, Sadak 2 is the WORST film I’ve seen in 2020 so far and its issues lie in its outdated script. This film didn’t even need to be called Sadak 2 as it barely adds anything to the first film. I even tried to watch this as a comedy and there were some funny moments but so much of it was boring that I wanted it to end as soon as possible. If this came out in 90s, it would have probably worked as I don’t think I’ve seen something so outdated in a long time.

The story is fairly predictable but Mahesh Bhatt and Suhrita Sengupta add a few twists along the way. These twists come out of nowhere and there is zero build up for any of them. I cannot forget to mention how bad the villains were. They’re so poorly developed and underutilised. Mahesh Bhatt could’ve told this story in a non-linear fashion which would have enhanced the story and characters in some way but this film takes none of those options. It decides to reveal everyone’s backstory in the most uncreative and lazy way: exposition. Its storytelling methods tell me nothing about Mahesh Bhatt’s skill as a director. There are no risks taken to present a bland story like this in an unconventional and original way. It’s told in the most basic way possible.

The song placements were so obnoxious. When stakes began to rise, for some reason a song would be played right after it. Not only is it tonally inconsistent but it relieves any tension the film may have built up. Then there were little things which got on my nerves. There’s this scene where Jisshu Sengupta plays a voice message of Alia Bhatt and before she speaks, the message is already halfway done but then she speaks for around two minutes which makes no sense. This shows the lack of care and effort that went into making Sadak 2. The film tries to spread the message of how God has turned into a business where the vulnerable are being taken advantage of and how you can find purpose in life after dealing with a loss but none of these are explored in greater detail.

I liked Sanjay Dutt’s performance here even though he had little to work with. Alia Bhatt is one of the best actresses working today and did an okay job. There are other films where I feel she gave a more memorable performance. Aditya Roy Kapur is completely wasted here. Jisshu Sengupta tries but the material he had to work with was so bad.

There are quite a few scenes that are unintentionally funny. I honestly couldn’t take Makrand Deshpande’s character seriously and some scenes with Alia Bhatt shouting and a scene involving an owl were quite funny. However, there is no point watching Sadak 2. Nothing about it is remotely enjoyable or special. It’s a very forgettable film and one I won’t ever see again.