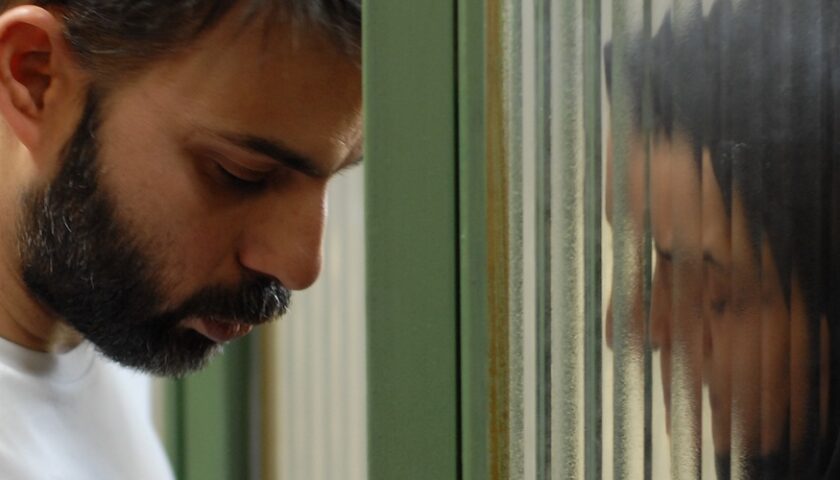 Arriving on the heels of his “The Boy” and “Brahms: The Boy II,” William Brent Bell’s “Separation” reconfirms the director’s belief that nothing is scarier than creepy killer dolls. His latest, alas, fails to successfully prove that case, and worse, its story about a recently widowed single father struggling with supernatural phenomena is a dull and misogynistic affair that imagines multiple types of women as malevolent fiends who terrorize supposedly sympathetic men. The outlook is dim for this fright-free thriller when it debuts in theaters on April 30.

Jeff (Rupert Friend) is a cartoonist whose former hit, The Grisly Kin, is now firmly in the rearview mirror, even if he refuses to accept that and clings to his artistic integrity like a crutch while his wife (and former creative partner) Maggie (Mamie Gummer) assumes responsibility for financially supporting them and their daughter Jenny (Violet McGraw). Given Jeff’s deadbeat narcissism — as well as his too-close-for-comfort relationship with doting nanny Samantha (Madeline Brewer) — Maggie naturally decides to leave Jeff and file for sole custody of Jenny, all with the backing of her father Paul (Brian Cox). That plan is not to be, however, since before she can abscond to Seattle with Jenny, Maggie is run over in a fatal hit-and-run, thus leaving the kid in Jeff’s care, much to Paul’s chagrin.

Although Jeff is everything he’s accused of being, “Separation” paints Maggie as a nasty harpy, and after she’s dead, she returns as a literal monster: a towering specter in a black wedding dress and veil whose face and hands are those of a puppet, not unlike the creepy Grisly Kin marionette dolls that Jenny bafflingly adores. Maggie strikes a reasonably unnerving pose, but her habit of appearing, and then disappearing, without doing anything makes her far from terrifying. Not helping matters is jarring, helter-skelter editing (from Brian Berdan and Eric L. Beason) that causes the film to segue from scene to scene with minimal tonal coherence. Ordinary daytime scenes, fantastical nighttime encounters, and nightmarish dreams (and dreams within dreams) materialize at random, thereby generating more confusion than tension.

Nick Amadeus and Josh Braun’s script is awash in clichéd contrivances, such that Jeff conveniently runs into a former acquaintance (Eric T. Miller) who just so happens to be a comics mogul, gets a job working for his pal, and then stumbles into a gig doing art for a writer (Simon Quarterman) whose new series is about “darkness” — and thus the perfect vehicle for Jeff’s sketches of the bogeywoman he sees around his brownstone. Quarterman’s author is also a fount of handy exposition about the afterlife and angry spirits, which allows the film to clue audiences into the fact that Maggie is a vengeful demon trapped in purgatory because she just can’t stand to let Jenny go — and, more specifically, to give her over to Jeff. As far as unflattering portraits of protective mothers go, this is rather ugly, and eventual revelations about Maggie’s death only exacerbate the proceedings’ noxious representation of women, which is contrasted by its compassionate attitude toward the selfish and parentally incompetent Jeff.

Despite having characters incessantly explain key plot points, “Separation” lacks basic logic. For example, if it’s Maggie who’s tormenting everyone, why does one of Jeff’s other fictional characters repeatedly come to back-breaking life (in a manner derivative of “The Exorcist”)? It also lacks formal polish, with red-drenched CGI sequences of New York City streets and swaying trees looking as chintzy and graceless as they are nonsensical.

The cast has nothing to work with here, but that doesn’t excuse the fact that every one of their reactions — especially from an unconvincing Friend — seem only half as freaked-out as the circumstances warrant, further contributing to the sense that no one knows quite what’s going on. Cox, at least, comprehends the nature of this work-for-hire gig, dispensing one-note bluster in the same nice suits, and with the same neatly trimmed goatee, that define his more acclaimed domineering Manhattan paterfamilias: Logan Roy on “Succession.”