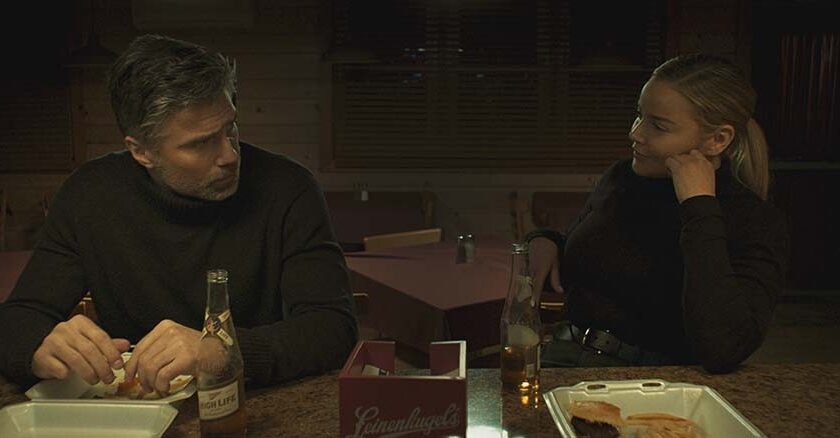 Less than a week after Anthony Hopkins won his second Academy Award for “The Father,” a dud called “The Virtuoso” arrives to make you wonder if they gave it to the wrong guy. The lousy-follow-up phenomenon happens all the time (in part because people throw money at newly minted honorees, which explains how Halle Berry became a Bond girl or pretty much everything Melissa Leo has made since “The Fighter”), but rarely does an Oscar winner have a turkey already waiting in the wings to undermine a career-high achievement.

Hopkins isn’t awful in “The Virtuoso,” but the movie that surrounds him is. It’s a cut-rate thriller about a nameless hit man (Anson Mount) so busy telling audiences how professional he is — via such affirmational observations as “You’re a professional, an expert dedicated to timing and precision” — that he doesn’t seem to notice his latest assignment is a setup.

The killer in question lives in a cabin in the woods, as so many movie assassins do (most recently, Mads Mikkelsen in “Polar,” Jean Reno in “Cold Blood” and Barry Pepper in “Trigger Point”). But instead of having to fight off younger comers eager to speed his retirement along, this guy accepts a shady assignment meant to draw him out. I say shady because Mount’s character has spent nearly 20 minutes of narration telling us how meticulous he is about planning his contracts, so this one — which requires him to show up at Rosie’s roadside cafe the very next day to eliminate an unidentified person — should’ve raised a few red flags.

The one glimmer of originality in James C. Wolf’s script comes from the idea that the virtuoso’s mentor (Anthony Hopkins) sees this suicide mission as an act of mercy. Early on, he sends the hired gun on an assignment that goes sideways: Pulling the trigger on a target in a red Mercedes causes the driver to crash into a parked RV, igniting a huge fireball that kills an innocent woman.

It’s hard to believe that this is the first time one of the virtuoso’s hits has claimed an innocent life as collateral damage, and Mount’s poker-faced performance doesn’t help to elucidate how this mistake has ruined him as a “homicidal killing machine.” But that’s apparently Hopkins’ assessment, conveyed via a loquacious cemetery monologue about atrocities committed alongside the virtuoso’s father in Vietnam.

The speech is a real eye-roller (among other things, it asks us to imagine a younger Hopkins, who would’ve been nearly 40 in the mid-’70s, as a feckless American GI). Even so, it’s slightly less laughable than scenes of the old man back in the office, polishing his guns or pawing through four cellphones for updates — the movie’s idea (or perhaps I should say “the movies’ idea”) of the sort of person who manages assassins.

Director Nick Stagliano was fortunate to land Hopkins, an actor whose appetite for scenery-chewing makes it a shame that the bureau and the graveyard are the only two spots he’s given opportunity to graze. Instead, the movie’s modest locations budget goes toward the teeny-tiny nowhere town intended to serve as the virtuoso’s final resting place. On his way in, he meets a beguiling woman who, by virtue of star value (she’s played by Abbie Cornish) and all-around efficiency, audiences can’t help assuming has been sent to kill him. When the hit man reaches Rosie’s, however, she’s there behind the counter, calling herself Dixy, so he rules her out, focusing instead on the loner (Eddie Marsan), the greasy stranger (Richard Brake) and the local gal (Diora Baird) who may all need to be killed, all without looking suspicious to local law enforcement (David Morse).

Mount, who showed early promise in the 2000 indie film “Tully” (and is perhaps best known as Britney Spears’ love interest in “Crossroads” two years later), has a generic look about him here — like a poor man’s John Travolta. The character’s nonstop narration is meant to reinforce the Swiss-watch precision of his planning, but instead exposes egregious contradictions in his method. (Why go to all the trouble of renting a remote mailbox if you can be reached at any time by phone? And why would someone who mourns an innocent woman’s death be OK with killing so many strangers? )

Such things are easily forgiven in genre movies if the director delivers on the action, but that’s not the case here, as everything looks flat, cheap and derivative, shot in a digital format better suited to the small screen. Hit man movies were a dime a dozen in the decade after “Pulp Fiction,” but now they’re not even worth that. It’s a shame to see so many talented actors wasted on such an amateurish production, whose title lends a pathetic note of irony to the whole affair.