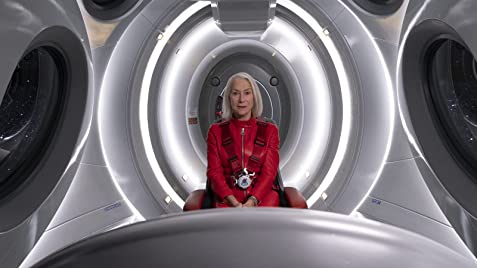 When it comes to ridiculously good casts, we don’t think it gets much better than this. Back in October, Amazon Studios announced a brand new anthology series titled Solos – and it features some majorly incredible names. Morgan Freeman, Uzo Aduba, Helen Mirren, Anne Hathaway, Constance Wu, Dan Stevens, Anthony Mackie and Nicole Beharie will all star. Intrigued? Sure you are. Here’s what else we know about Solos.

“The seven-part anthology series explores the strange, beautiful, heart-breaking, hilarious, wondrous truths of what it means to be human. The series spans our present and future and illuminates that even during our most isolated moments we are all connected through the human experience.”

It’s split into seven separate character-driven stories “each from a different perspective and moment in time – that illuminate that even during our most seemingly isolated moments, in the most disparate of circumstances, we are all connected through the human experience”.

Speaking about the project, executive producer and showrunner David Weil (Hunters) said, “I am beyond thrilled to be bringing Solos to life alongside this group of artists who I so deeply admire. I created this piece with a desire to capture stories about connection, hope and the search for that common hum of humanity that binds us all.”

Fifty Shades of Grey and Nowhere Boy’s Sam Taylor-Johnson is also on board as an exec producer and will be directing two episodes, while Weil will be making his directorial debut. Zach Braff and Tiffany Johnson will also serve as directors.

So. Many. Incredible. Actors. Uzo Aduba fans will be thrilled to see the Orange Is The New Black star back on our screens after critically-acclaimed mini-series Mrs America, while Anthony Mackie will be taking a break from Marvel and Netflix to dip his toes into Amazon Prime Video territory to play Tom. Meanwhile, Crazy Rich Asians star Constance Wu will be playing Jenny, Dan Stevens will play Otto, Helen Mirren is Peg, Morgan Freeman is playing Stuart, Anne Hathaway is Leah, and Black Mirror and Sleepy Hollows star Nicole Beharie is Nera.

The series will launch on 21st May exclusively on Prime Video in the UK, United States, Australia, Canada, Ireland, India, New Zealand and later this year in additional territories.

The first trailer for Solos dropped on 11 May, and shows the seven characters (have we mentioned the star-studded cast?) reflecting on what it means to be alone. There seems to be a sci-fi element to the show that we weren’t initially expecting, with the likes of Anne Hathaway’s Leah isolated in what looks like a space station. You can watch the trailer below.