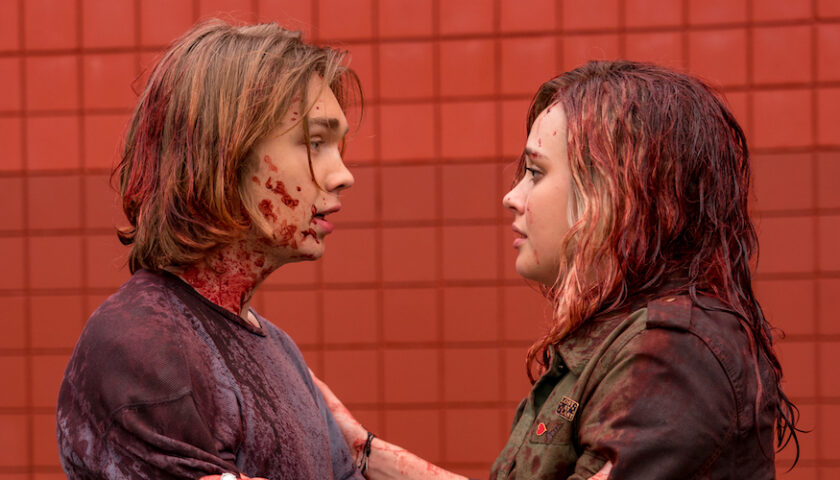 Katherine Langford and Charlie Plummer star in this darkly comic horror story about a wave of spontaneous combustions among high school students.

Everyone knows that one’s teenage years are fraught with peril. Beside the typical problems of peer pressure, burgeoning sexuality, academic performance and body image, today’s youth have to deal with the ever-present dangers of school shootings and the coronavirus epidemic. And, in Brian Duffield’s new comic horror film, a mass wave of spontaneous combustion.

Such is the audacious conceit of Spontaneous, based on Aaron Starmer’s 2016 YA novel. The film is both a coming-of-age tale and love story, complicated by the fact that its charming main protagonists, superbly played by Katherine Langford and Charlie Plummer, are faced with the possibility that they might literally explode at any time. And you thought you had problems in high school.

Langford (13 Reasons Why, Knives Out) plays the central role of teenage Mara, the sort of feisty, funny girl around whom these sorts of tales often revolve. Mara seems to have good things going for her, including loving parents (Piper Perabo, Rob Huebel, reaching the parental stage of their careers) and supportive buddy Tess (Hayley Law, terrific), who’s been her best friend since childhood. But her life takes a drastic turn for the worse when her classmates inexplicably begin blowing up, their bodies reduced to bloody shreds while their clothes remain intact.

There is, however, a bright side to the apocalyptic situation. Mara begins a relationship with her classmate Dylan (Plummer, Lean on Pete, Words on Bathroom Walls), who, spurred by the rude reminders that life can end at any time, confesses his crush on her in a series of text messages. The ensuing romance between the two offbeat but endearing characters becomes the beating heart of the film, which also takes on a dark, satiric tinge as more and more bodies go poof.

Government scientists and intelligence agents are inevitably drawn into the proceedings, providing the opportunity for a quarantined Mara and Dylan to perform a hilarious riff on E.T. and Elliott that results in them (and us) cracking up in hysterics. It’s not the only nostalgic reference to the decade, with the young lovers at one point enjoying an ’80s-themed dance party. Filmmaker David Cronenberg is also name-checked, and anyone who’s seen Scanners will certainly know why.

So far, so relatively, if gorily, silly. But the film proves that it has more on its mind than simply being another gross-out teen horror-comedy when the story takes on a much darker tone roughly two-thirds through its running time. The shift is signaled by the screen turning entirely crimson, at first seeming like a technical malfunction until the realization of what has just tragically occurred begins to settle in. It’s at this point that Spontaneous becomes an improbably moving portrait of loss and the sort of despair that, so often among young people in particular, results in acting out and resorting to drugs or alcohol.

Making his feature directorial debut (he’s written such screenplays as Insurgent and Underwater), writer-director Duffield expertly handles the complex tonal shifts, keeping us on edge even as we’re laughing. We’re also thoroughly engrossed in the main characters’ fates, thanks to the witty, perceptive dialogue and the two leads, who bring an unforced, charming naturalism to their performances.

Spontaneous occasionally indulges in the predictable stylistic tropes of its genre, such as when Mara delivers sardonic narration via direct addresses to the camera. But even those are imaginatively handled, as evidenced by a fantasy sequence in which she imagines herself being sworn in as U.S. president and takes the opportunity to deliver a profane tirade to Donald Trump. After all the carnage that’s been put on display, it feels positively cathartic.