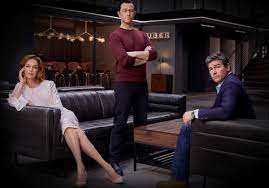 Right as he’s about to get the answer to the “are you an asshole” question, Ryan Graves (Joel Kelley Dauten), who was CEO of Uber for a few months in 2010 before Kalanick decided to take over the company he co-founded with Garrett Camp (Jon Bass) himself, talks to him about passenger safety issues. The solution? A “Safe Rides Fee,” that gives the public the perception that they’re listening and puts more money in their coffers. “That’s some motherfuckin’ Michael Eisner shit right there,” Kalanick says.

Flash back to 2011, when Uber was still called UberCab and just serving San Francisco. Kalanick is looking to get a round of VC funding from one of the best-known investors in the business, Bill Gurley (Kyle Chandler). His girlfriend Angie (Annie Chang) is confident he’ll get it, even if he’s going to meet Gurley wearing a sweater and New Balance sneakers. At the meeting over some drinks, Gurley doesn’t want Kalanick to sell him, but Kalanick is so engaged with the idea of skirting most cities’ medallion-based taxi system that he naturally embellishes stories about when Camp came to him with the idea for the frictionless ride-share service.

By the end of the night, Kalanick has pretty much sold Gurley on UberCab, including the fact that he’ll take good ideas from his investor, but doesn’t want to be controlled. But Gurley almost pulls his offer when Kalanick brazenly tells him that he doesn’t need the money.

At home, Kalanick’s business-oriented mother Bonnie (Elisabeth Shue) and goofy dad Donald (Brian Howe) root their entrepreneurial son on, but are equally proud of Travis’ firefighter brother Cory (Mishka Thébaud). Cory, though, is perpetually pissed at the attention Travis seems to get for his tech ideas.

During a party to celebrate UberCab’s users, Kalanick encounters Randall Pearson (Richard Schiff), the head of San Francisco’s transportation commission. Pearson is intent on either shutting UberCab down or convincing Kalanick to use his technology for the city’s existing taxi system. Kalanick is interested in neither and tells Pearson in no uncertain terms.

Pearson immediately issues a cease and desist, but Kalanick is determined to keep going. In an effort led by the company’s fourth-ever employee, Austin Geidt (Kerry Bishé), he not only tries to recruit drivers away from the taxi system but get UberCab riders to sign a petition to bring to the mayor. But the company is burning through so much money they’ll soon be broke. He sheepishly goes back to Gurley for more money, and Gurley gives it to him, but installs a financial whiz, Emil Michael (Babak Tafti) to help oversee Kalanick’s spending.

Then, when they mayor grants UberCab permission to operate though they’re still on the hook for the previous fines they incurred, Kalanick has an idea to help skirt regulations: They’re no longer a taxi company called UberCab, but a ride-sharing company called Uber.

Shows about real-life techbros all seem to take on the same tone. They’re aggressive and in the viewers’ faces, with the actor playing whichever techbro speaking in f-bomb laden rapid-fire speeches instead of dialogue that sounds like something a real person would say. That’s what we get in the first 20 minutes of Super Pumped: The Battle For Uber, and it’s a real turn-off.

We like Gordon-Levitt as an actor, and we know he has the range to play someone as out there as Travis Kalanick and turn around and play the extremely depressed title character in Mr. Corman. But he’s given dialogue by creators Brian Koppelman and David Levien (creators of the aforementioned Billions) that may have come from Kalanick’s mouth — the show is based on a book by Mike Isaac — but not all at once in such a rapid-fire way.

There’s a voice over by Quentin Tarantino that doesn’t make a whole lot of sense, since we’re not even sure if he’s playing himself, Kalanick or someone else. And there’s graphics that interrupt the early flow of the episode in a way that sets our teeth on edge.

But once all of the mania settles down and we get into the meat of the story about Kalanick’s fight to get Uber established and grow it into what it is today we actually got bored. You know why? Because The Battle For Uber is about a company that has been shown to treat its drivers poorly, including not giving the app provisions for a rider to leave a tip, it pays lip service to rider safety, charges passengers “surge pricing” during heavily-trafficked periods, and has a workplace culture that was pretty toxic, even by tech standards.

Giving us the story of Uber from the perspective of Kalanick, who is just trying to skirt a hidebound system that treats drivers even worse than he does, doesn’t interest us in the least. Is the show going to portray Kalanick as a jerk, a hero or somewhere in between? We get the feeling it’s going to lean towards hero, even if he acts like an asshole, and that’s something that we don’t think we can stomach for 7 episodes.

The addition of Arianna Huffington (Uma Thurman) to the company’s board might make the story more interesting, as we’re curious about how Thurman portrays the controversial pundit-turned-tech-giant. But without a serious examination of Uber’s corporate culture and how it seems to not care about the safety of its customers, the series feels like it’s going to just glorify assholishness, even if it’s done inadvertently.