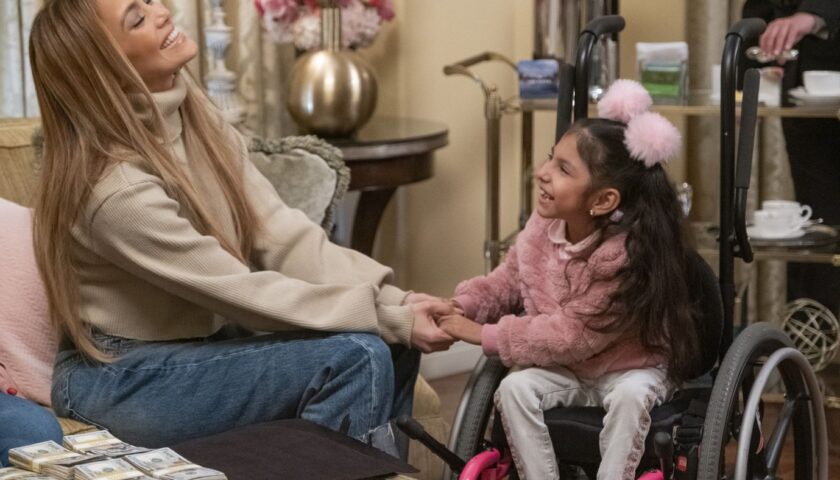 Look, I’m not gonna hate on this show. It sets out to do something positive, and the intention behind it is pure goodness. That said, I’ve made it through four full episodes and the whole thing still feels kind of plastic, if you know what I mean. I think the main problem is, it’s too short. And I hear you…’But the series is supposed to be made of shorts, that’s what Quibi is.’ Of course, I fully realize that, but each short ep runs about 8 to 9 minutes.

In each clip, we are introduced to a celebrity (Jennifer Lopez, Kevin Hart, Kristen Bell, and more) and then taken along for a hurried ride as we meet the person/family the celeb is giving the money to; and then the next person, who gets half, and then the next person who gets half of that money. The original recipient gets half of $100,000; and then break that down twice more, basically. It’s good and quick, but like I said, maybe too quick. The cash-giver celebs have good intentions but their explanations for why they chose a particular first recipient seem a bit repetitive and impersonal after a few episodes.

In my opinion, the most genuine celebrities so far are Nick Jonas, and Kristen Bell. Nick truly had a story behind his person, and Kristen Bell just has such a good spirit about her. Jennifer Lopez also came off as sweet and earnest. But the last (small) thing I just can’t quite get on board with is this: the third and final person in the giving chain is always told, “(celebrity name here) started this chain of gratitude, and I’m giving this (amount of $) to you!” No doubt the whole thing is scripted because of course it is. But that line, in every episode, just seems fake/cheap to me. There’s just something kind of unnatural about that, almost like each celebrity demanded, “I’ll do this, as long as you make sure and name drop me at the end,” Just seems out of place.

Sure, the celebrities featured are rich, and they’re a great draw, and it’s always nice to have a hand in something good. But the name dropping is usually so awkwardly delivered that kind of takes you right out of it for a few seconds. Maybe I’m much too nitpicky and it’ll improve as it goes. 99% of these ‘Average Joe’ recipients aren’t actors, anyway… not like I can do better!