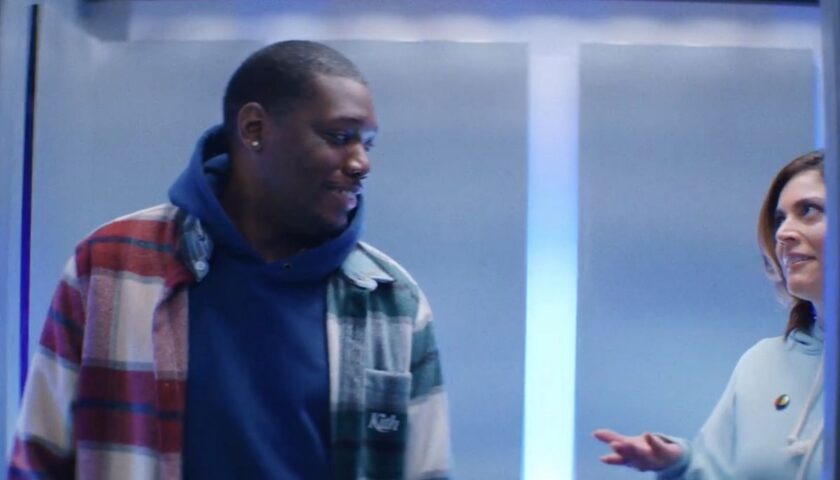 Of course, the stand-up comedian and SNL Weekend Update co-host already conceived of and delivered a definitive take on BLM almost five years ago as part of his Netflix stand-up special, Michael Che Matters. For this series, though, Che can get his funny friends and more to act out his jokes and thoughts for all of us to see, so…DING! The sound signals our segue to the first sketch, with Che entering an elevator only to find himself quickly stuck inside with a nervous white woman named Jen, played by SNL stalwart Cecily Strong. After an initial zinger based on miscommunication, Jen launches into a seemingly neverending torrent of apologies on behalf of all white Americans. But it’s only a minute before we cut to the opening credits.

Episode one, “Policin’,” will return to the elevator multiple times. In between, we’re also treated to a PSA from the NYPD, “Quick and Easy Things You Can Do To Not Get Shot By Police,” that suggests none of the things are quite so quick or easy. There’s an animated sketch, “The Policemen,” in which the cops appear as actual superheroes modeled after the X-Men, facing off against the forces of BLM protestors as represented by the Rev. Al Sharpton, DeRay Mckesson and Shaun King. A parody ad for a new Fitbit model called the Protest, which appeals to both sides, what with an “Ally Mode” to receive alerts when it’s time to apologize to marginalized groups, or a wristband that comes in Confederate battle flag colors. The sketches poke fun at both sides of the debates over policing in America, served at the core by reminders from Che that one of his brothers is a police officer, and fleshed out even more in a flashback sketch re-imagining when his brother broke that news to the Che family.

And then there’s Smokey Robinson?! Che regales us with the story of “Gang Bangin’,” the song and music video the Motown legend released in 2004, which went viral again last summer. “Look it up, it’s hilarious!” OK. Let’s pause to reminisce, either as a bonus after watching That Damn Michael Che, or to get you more excited to see what Che’s talking about.

aybe you can picture a modern-day version of Chappelle’s Show that lost the live studio audience and the energy that went with that, but the comedic vignettes often tend more toward dramedy with a side of comedy, or even the “very special episode” flavor that made 1980s sitcoms so weird, as Che himself acknowledges when introducing episode three. It’s most certainly not A Black Lady Sketch Show, even though they share a streaming platform home and the basic premise of examining contemporary American issues through the Black American lens. Although the first season does feature a bit of inspired casting with roles for Cleghorne as well as for Geoffrey Owens.

With their elevator unstuck, Che and “Jen” learn they both were headed to the same 15th-floor gym of an apartment building, although Jen turns out to not be an ally when it comes to letting Che in the door with her without his key card. It’s the straightforwardly awkward version of a premise that Astronomy Club used more surreally to open its 2019 Netflix sketch comedy season.

Not in the first episode, but you’ll only be slightly less surprised by the appearance of full-frontal male nudity in two episodes since you read this. Sorry not sorry?

Guest star Billy Porter doesn’t have a hard time shining in his brief role as a security guard at the building with the stuck elevator. But the true sleeper stars are two of the comedians who also wrote for Che’s series: Reggie Conquest, and Godfrey. Conquest, who got our attention last year in the most recent season of Insecure, shines throughout the season in a variety of supporting roles, while Godfrey, who provided impersonation voiceovers for Showtime’s Our Cartoon President, shows off his live-action sketch chops in episodes two and three as a faux Steve Harvey and as an ex-con with a unique fitness program to sell on big-bodied women.