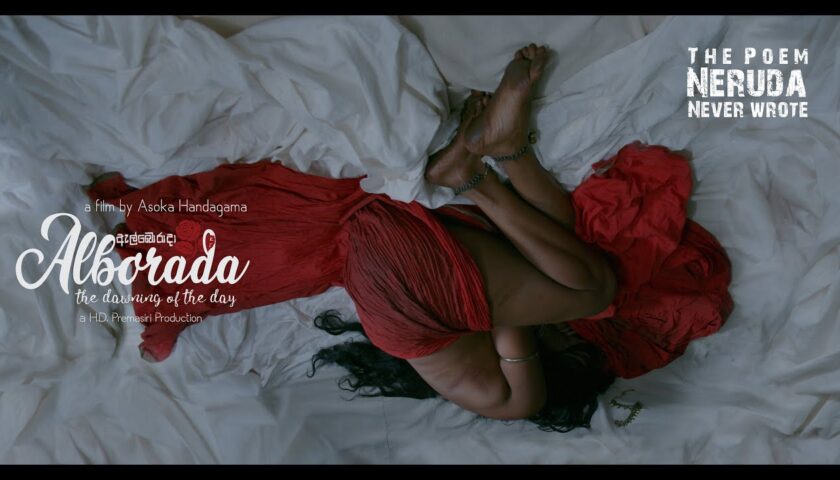 The Dawning of the Day 2021 Movie Review Poster Trailer Online

Often referred to as one of the 20th century’s greatest poets, if not the greatest, and adored by many, Chilean activist and diplomat Pablo Neruda is also, according to many, a self-confessed rapist. That’s the jumping-off point for The Dawning of the Day, Sri Lankan filmmaker Asoka Handagama’s fictionalized account of Neruda’s stint as ambassador to Sri Lanka in 1929.

Making its world premiere in competition at Tokyo, The Dawning of the Day begins by letting Neruda’s words speak for themselves, flashing prose from his 1974 memoir on the screen: “She kept her eyes wide open all the while, completely unresponsive. She was right to despise me. The experience was never repeated.” Notably, Neruda calls rape an “experience,” like surfing — an attitude rooted in the gender and race imbalances that Handagama spends the entirety of the film establishing and then challenging.

Neruda’s flowery poetry has raised him to the status of a romantic to be admired and a lover of beauty. That image has made him the subject of countless films, most notably 1994 Oscar contender Il Postino. Most of those films have also conspired to erase any rape from his legacy. But Handagama’s methodical deconstruction of the icon theorizes that his work’s heart-thumping sensuality could have darker roots. With our collective behaviors and the very definition of sexual assault under a revisionary microscope, The Dawning of the Day is destined for a long festival life. Art house distribution could be in the cards where theaters are open, and the film’s modest production will make it a comfortable fit for streaming platforms.

Without making light of the story to follow, when Neruda (Luis J. Romero) arrives in Ceylon to take up his duties and tours his villa in the Wellawatte neighborhood of Colombo, it’s difficult not to see the sculpture of the goddess Parvati in the living room as a kind of Chekhov’s gun. He’s given the local rundown by his assistant, Rathnaigh (Malcolm Machado), who at one point also explains the difference between himself, a Tamil worker and the Sakkili woman (Rithika Kodithuwakku) Neruda sees every morning emptying his outhouse. Because she’s a low-caste untouchable, Neruda is cautioned against engaging with her. Needless to say, he watches her intensely every day.

Handagama has opted for a script structure that wisely leaves any depiction of the sexual assault to the closing frames, using the time leading up to it to paint a portrait of one of the world’s “great men” as outwardly progressive but an intense jumble of conflicted beliefs and actions once the surface is scratched, as if there were a cognitive dissonance he didn’t recognize. At a consular event, Neruda meets photographer Lionel Wendt (Dominic Keller), who turns out to be the only colonial officer who speaks the local language and doesn’t refer to Sri Lankan art and culture as “noise” or “baffling.” The poet also meets Patsy (Nimaya Harris), who becomes his lover.

Handagama is no stranger to thorny subjects (his 2005 freedom-of-expression treatise A Letter of Fire was banned at home), and here he quite bravely reframes Neruda’s words, essentially reframing the man himself. The director by no means suggests that we dismiss Neruda’s art and deny his literary genius, but he does demand that we rethink the work’s origins and perhaps the power dynamics that birthed it.

Neruda’s Burmese former paramour Josie Bliss (Anne Solenne-Hatte) also makes an appearance, and Neruda’s contempt for her, his boredom with her, reveals a relationship to women and race that’s visible in the context of his work only in retrospect (his eventual writing about Bliss was scathing), and of course in his confession. When he finally gets “a strong grip” on the wrist of the Sakkili woman, who “let herself be led away,” the rape itself is effectively photographed from two perspectives, with Neruda’s perception of her as the Parvati statue — notably, the Hindu goddess of love and fertility — speaking volumes.

Despite some occasionally clunky line readings and unpolished performances, the largely unknown cast settle into their roles ably, particularly Romero, who manages to wordlessly shade Neruda’s contradictions. There’s no tortured romantic here. Channa Deshapriya’s widescreen cinematography captures Sri Lanka at its most lush, but the real achievement is in the seamless visual shifts that sexualize Kodithuwakku’s cleaner when Neruda looks at her, and humanize her when the rest of us do.

The Dawning of the Day 2021 Movie Review Poster Trailer Online