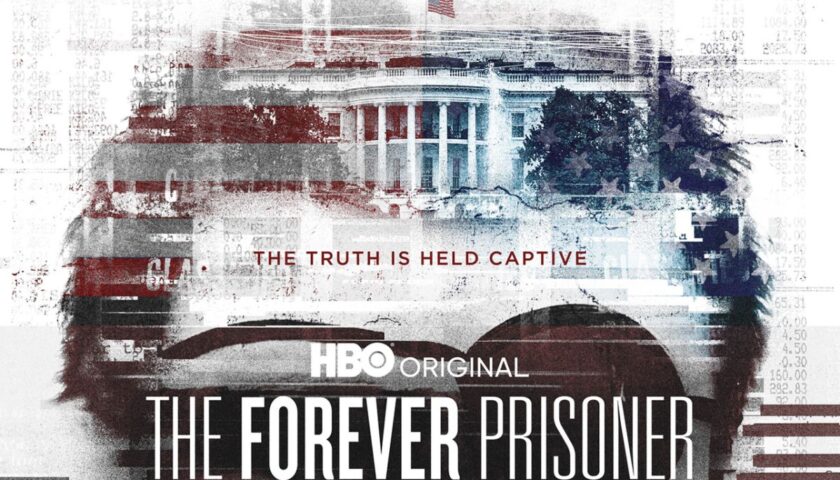 Which combination of factors led to audiences seemingly ignoring The Report and The Mauritanian, two feature films in as many years about the U.S. government’s rubber-stamping of “enhanced interrogation techniques” (EITs) after September 11, 2001, and the inhumanity, corruption, and nationalism that sprawled forward from the legalization of torture? Maybe it’s human nature to shy away from evidence of complacency and cruelty, and to ignore what could be one’s part within it.

Maybe the normalization of forever war, and the sense that the War On Terror is just something happening over there rather than here, has fueled collective disinterest in stories about the bloody toll. Maybe it’s lingering racism, maybe it’s Islamophobia, maybe it’s a general belief that the ends justify the means. The Forever Prisoner, Alex Gibney’s pointedly incisive but somewhat familiar documentary about the events that led to the incidents dramatized in those previous films, addresses all those possibilities head-on.

Ostensibly, this documentary is about Abu Zubaydah, a Palestinian man detained by the U.S. for possible ties to Al-Qaeda and Osama bin Laden, tortured at length via EITs at a black site in Thailand, never charged with a crime, and still held in U.S. custody now, nearly 20 years later, at Guantanamo Bay. But Gibney uses Zubaydah as a jumping-off point to tell a larger story about all the bureaucrats, officials, agents, and lawyers in the FBI, the CIA, and the Department Of Justice who, in a frenzy to protect American citizens, threw their trust behind and their money at untested people who practically made up the EITs as they went along.

Gibney thrives on the oppositions between appalled talking heads explaining what went wrong and flashbacks to the smugly confident people doing the wrongdoing, and he peppers those throughout The Forever Prisoner. The documentary is split into roughly three parts. First, Gibney captures the national mood after 9/11: archival footage of then-President George W. Bush on the ground in New York City, grinning to “USA!” chants from police officers and firefighters; Peter Jennings informing viewers that the U.S. had invaded Afghanistan; news footage of the 38 million people displaced because of the destruction of the Middle East by the War On Terror. Next up is a profile of Zubaydah, who grew up in Saudi Arabia, struggled to reconcile his womanizing with his Muslim faith, and ended up in Afghanistan, where he became affiliated with—but not a member of—Al-Qaeda. When Zubaydah was first captured by the U.S., he cooperated willingly, say former FBI agents Ali Soufan and Stephen Gaudin.

The information he provided led to arrests and an expansion of the FBI’s understanding of Al-Qaeda and bin Laden’s terror network. But when the CIA became involved with their “learned helplessness” method, their aggressive use of EITs, and their incorrect certainty that Zubaydah was a far greater asset than he really was, with far more information to share than he really did, Zubaydah shut down—sparking a cycle of further hostility from the CIA. At this point, The Forever Prisoner then transitions from a description of who Zubaydah was to an account of what was done to him, and the third element of the documentary becomes its primary focus: an indictment of the CIA.

The scoffing questions surrounding all discussions of U.S.-enacted torture after September 11 are fairly predictable—do terrorists, or people we presume to be terrorists, deserve human rights?—and Gibney dives into the morality and legality of the “capture, detain, question” dictate that the U.S. government enacted. Per usual, Gibney crams in as much information as possible into a two-hour runtime, with an overload of redacted government communications, video clips of depositions from high-ranking officials during a 2017 court case involving the torture program, photographs of abuse, and other supporting evidence, and his customarily deadpan, almost snide, narration guiding us along.

It’s arguable whether he lets certain interview subjects, like former Acting General Counsel of the CIA John Rizzo and former Chief Of Staff to Colin Powell Lawrence Wilkerson, off easy by abstaining from questioning them too vigorously about the war-drum beating that helped pave the way for EITs. But Gibney’s focus seems to be less on attacking all those people and more so on letting certain individuals snipe at each other to make plain who was in the wrong then and remains in the wrong now. To do so, he aims Soufan and Dr. James Elmer Mitchell, psychologist and chief architect of the EITs, at each other, and it’s a shade-enabling approach that is both entertaining and dispiriting to watch.

Again, viewers of The Report will recognize Mitchell’s name as the basically unvetted outsider who was brought in by the CIA, given enormous resources, trust, and legal backing to design EITs like waterboarding, and who eventually was paid with tens of millions in taxpayer dollars for furthering the (widely disproven) idea that “learned helplessness” would provide usable intelligence. The fact that Mitchell agreed to an interview at all is what makes The Forever Prisoner worth watching for people already familiar with this story. Gibney’s challenging interview style, the uncompromising tone of his questions, and the way he undercuts Mitchell’s self-aggrandizing martyrdom (and conveniently murky timeline regarding the deployment of EITs in the field) are satisfying distillations of what so many people who recognize Mitchell as a war criminal who got away would probably like to say.

The Forever Prisoner tries to imprint upon us some sense of what America has lost since that time, and its attempts to impart a message of failed morality are impactful. Zubaydah, who Gibney describes as the “origin story of America’s failure of intelligence,” has become a ghost since his detainment, but Gibney lets him speak through excerpts from his journals, images of the drawings he sketched of the torture he endured, and recreated video footage of the EITs to which he was subjected. The CIA destroyed that evidence (and more), but Gibney puts a version of it back together and backs it up with interviews from Zubaydah’s civilian and military lawyers.

He gives Soufan—whose CIA-banned book, The Black Banners: How Torture Derailed The War On Terror After 9/11, was unredacted thanks to a lawsuit from Gibney, and is excerpted from here—space to elaborate upon the galling dehumanization of EITs, and how they undermined the work being done by other members of the intelligence community. It’s interesting how fully Gibney seems to position the FBI as heroes of this story compared with the CIA as villains, given how much his filmography as a whole is about distrusting all agents of bureaucratic power. But perhaps this binary is inevitable when the CIA has people like Mitchell, Tenet, and Jose A. Rodriguez Jr., who approved the destruction of the tapes featuring Zubaydah, on their side. And in Jones, who Adam Driver portrayed in The Report, Gibney finds a moral compass whose deep knowledge of the details of this time, and the myriad transgressions of our public servants, provide legitimacy and authority.

“We are one of the most violent people on the face of the earth. To deny that is to deny reality,” Wilkerson says, and The Forever Prisoner spins that observation into an infuriating history lesson, full of both labyrinthine backroom agreements and obviously trackable lies about the efficiency of EITs via secure government messages or first-hand accounts from people who were there. “Isn’t the U.S. supposed to be better than this?” Gibney asks, and he’s not wrong. Another question, though: How many times do filmmakers need to tell this story before viewers finally pay attention?