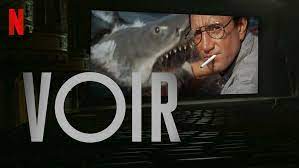 Netflix’s docu-series, Voir, is a collection of six visual essays created by film enthusiasts as a tribute to their favorite films or moments that changed their lives. The French word “Voir,” means “to see,” “experience,” and “perceive.” Hence, each episode is an in-depth exploration of those minute and intricate details that later became the reasons for these respective creators to adore, cherish, and revisit these films consistently and constantly in their lives.

Coming from David Fincher and David Prior, Voir is an infotainment series that blesses you with an entertaining analysis of films, characters, and visual arts that have now become an integral part of our lives. Let’s explore what these 6 episodes are about.

The first episode of Voir, as the title suggests, is about sharks. And what other film than Spielberg’s Jaws can create the terror of the sharks.

Jaws took the box office by storm, and it was an era when everybody had their own Jaws story. After the success of Jaws, the studio was ready to invest in more “fan-boy” films that could sell merchandise. The invention gave rise to branded, packaged movies based on video games and comic books aimed at the teenage male demographic.

Sasha explained that one can’t blame movie fans for liking what they like. But with the success of Jaws, Hollywood had learned the wrong lesson. They are thoroughly investing in packaged theme-park films in their pursuit of the numbers and spectacles that films like Jaws or Star Wars once created. However, they forgot that Jaws had a story, an actual story, with characters depths, void of idiot-proofing and white-washing. Jaws had Spielberg’s soul in it.

Maybe, David Fincher explained the distinction between movies and films a lot earlier. He stated that movies are made for the audience while, on the other hand, a film is made by a filmmaker.

The second episode of Voir focused on revenge stories or characters on the path of vengeance. For Tony Zhou, Park Chan-wook’s Korean film, Sympathy for Lady Vengeance, changed his perspective towards cinema.

Tony explained that the standard definition of an act of revenge has two parts: grievance and retaliation. But according to him, there is a third. The pursuit of revenge doesn’t begin for a character until and unless he chooses to walk down the path of vengeance.

People relate to the intensity of the violence because most of us have suffered in real life, yet we choose to remain quiet or ignore the injustice due to our inhibitions. And maybe that is why we adore the person on screen who fights against injustice, which in turn becomes a bloody catharsis. We tend to accept graphic violence because the revenge stories create empathy for the protagonist, and as a result, their retaliation is justified.

Most of these revenge characters end up lonely in the end, because legal society won’t accept them, hence making them an outcast. It is the price they pay for their vengeance.

This was by far the best episode of Voir, created by Drew McWeeny. The third episode depicted our inclination towards flawed heroes or anti-heroes, and it laid down why cinephiles are in love with skins like the Joker or Michael Corleone.

Drew explained the psychology and structure of an anti-hero through the character of D.H. Lawrence in Lawrence of Arabia. The savageness in his character was underlined when he killed two men in the desert, yet ironically, he felt good about it. Looking at them through a moral compass, we don’t like such brutal characters or vigilantes, yet we are drawn towards them.

These flawed characters are more accurate than our ideal archetypes. They aren’t part of a “happy ever after” narrative but depict a dramatic graph of “how good men turn evil.” After an extensive study of Michael Corleone, who was compelled to pull the trigger to save his family, Drew discussed the God of Flawed Characters, Martin Scorsese.

Through his characters like Travis Bickle, Jake LaMotta, Jordan Belfort, etc., Scorsese challenges the preconceived idea that audiences have to like the lead protagonist. He has made films about people driven by passions that consumed them. These characters are not likable at all, yet we fall for them. Why?

Drew explained that stories of darkness and dysfunction attract us because we want to understand these flawed characters who seem so broken or wrong. For cinephiles worldwide, these are the characters that become their area of study. They pen down intricate theories to explain these characters’ behavior and choices. Their worth lies in the fact that they invite so much discussion and literature.

In the end, Drew underlined the fact that in Lawrence of Arabia, Lawrence wanted to be right and liked, but his journey was about letting go of the importance of being liked. To achieve greatness in life, Lawrence had to make a decision, and he had to abandon his hunt for approval. Lawrence knew his desire to be loved, but he also understood that he could become great if he was willing to be hated. When he accepted the hatred from the people, D.H. Lawrence became Lawrence of Arabia.

The fourth episode deals with animation aesthetics and visual appeal. Audiences are attracted to an artwork when it appeals to them. But what is the appeal?

For marketing executives, an appeal is about glossy colors, beautiful clothes, packaging, and perfect shapes. Animator Glen Keane explained in the episode that, for him, an appeal is more about harmony in the design. Appeal is something that actually speaks to the audience instead of enchanting them with glitter. In animation, the appeal isn’t about what a character looks like, but how the character makes you feel.

The first and most obvious distinction between television and film is that film draws you to the theater for a moving experience, whereas television comes to you in the comfort of your home. While it was easy to draw a clear line of distinction between films and television in earlier times, with the advent of the internet, the line has started to blur.

Today, each fan of cinema flaunts a wide flat screen, a home theatre system, or at least a laptop on which they usually binge. The availability of sizeable full HD screens has reduced our reliance on the cinema hall to view its full 16:9 ratio. And with new shows like Game of Thrones and Breaking Bad being made for television, the narrative has really reached new cinematic heights.

However, there is one distinct difference between the structure of television series and films. In films, the story usually unfolds from the viewpoint of a single character, often known to us as the protagonist. A filmmaker usually gets a single chance and limited time to tell a story, so they try to make every moment count. It’s an enriching character’s journey in which we can often trace a transformative character graph.

While the essence of television series is that there are many chances to tell a story, Every day, there is a new episode that follows a single format. However, it also allows space to follow the lives of different characters simultaneously, thereby weaving a multiple-character narrative.

The sixth and last episode of Voir is a deep analysis of Walter Hill’s 1982 film, 48 Hrs, which marked the debut of Eddie Murphy. Through this buddy movie, Walter Chaw engaged the audience in a conversation about race and identity in America.

48 Hrs is considered the headwaters of the wave of international buddy films that exploded throughout the 80s and the 90s and whose essence is still visible in modern movies like Django Unchained. But 48 Hrs wasn’t a commercial buddy comedy film, and instead, Walter Chaw considered it a violent collision between commercial and inflammatory elements.