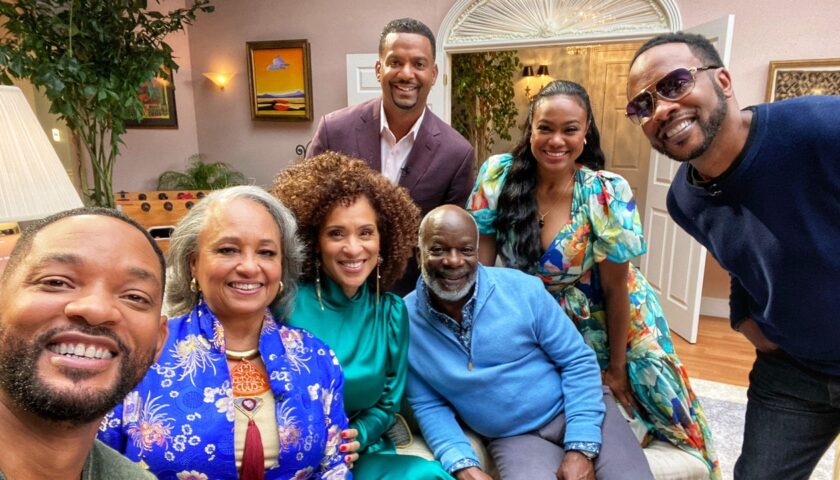 Will Smith, Alfonso Ribeiro, and Aunt Vivs Janet Hubert and Daphne Maxwell Reid return alongside the rest of the cast for HBO Max’s unscripted reunion.

Few things feel as preordained as HBO Max’s The Fresh Prince of Bel-Air Reunion, especially during a year that saw several iconic TV casts (minus the Friends) come together to remember good times and provide comforting, feel-good entertainment to homebound fans. What does surprise about the special is how moving, even cathartic, it is, reuniting Will Smith with Janet Hubert, who played Aunt Viv until she was replaced by Daphne Maxwell Reid after the third season, for the first time in 27 years.

Much of the special finds the 1990-1996 series’ core cast — Smith, Reid, Tatyana M. Ali (Ashley), Karyn Parsons (Hilary), Alfonso Ribeiro (Carlton) and Joseph Marcell (Geoffrey) — gathered on a recreation of the series’ living-room set. (James Avery, who played Uncle Phil, died in 2013, while Ross Bagley, who played Baby Nicky, makes a late cameo.) The obligatory clips reveal the younger actors to be just as outrageously talented as you remember, and the more seasoned performers making the most of their less-showy roles. Though the actors appear as themselves, rather than their characters, the charisma and chemistry they evinced as the Bankses is in full view, as is their obvious and bone-deep fondness for each other.

The reunion is both strengthened and limited by the focus on the cast. It’s fun to watch them watch Ribeiro and Parsons’ audition tapes, for example, which leads to an observation that however insecure the actress felt during her (admittedly limp) line readings, she’d already nailed her ditzy character’s petulant, over-confident lower-jaw placement. In a later segment dedicated to Avery — whom Smith remembers as a “six-foot-four Shakespearean beast” — the younger cast members recall the education in Black artistic and musical traditions that the stage-trained actor was always eager to impart. The series-making line “how come he don’t want me, man?”, uttered by an angry and defeated Will about his estranged father to Uncle Phil, gains even more poignancy when Smith tells of how Avery was a supportive father figure to him both in character and between takes.

The only thing more implausible than the story of a West Philadelphia teen shipped across the country to live with his Beverly Hills relatives is the stratospheric rise of Smith himself, even before he became one of the biggest movie stars on Earth. Smith is easily able to access his dazed 21-year-old self, a rising rapper who got talked into auditioning for NBC execs waiting in the next room over at Quincy Jones’ mansion despite never having acted before — and how it seemed much more surreal to him than thrilling or triumphant. But the special then fast-forwards to six weeks later, to Smith’s first day on set. How Susan and Andy Borowitz came to create the show — and if the cast ever advocated for more Black writers and directors — aren’t to be found in the reunion.

The cast was always aware that most of the show’s writers were white — and  it was thus incumbent upon them to contribute to the scripts. (“We made sure we were authentic, every episode,” beams Ribeiro.) It’s genuinely heartwarming to see that the cast felt welcome to provide input, especially when it came to matters of race. But even the most cursory scan of the show’s Wikipedia page reveals the credits for Black writers like John Ridley, Winifred Hervey, Devon Shepard, Maiya Williams and Samm-Art Williams. Which isn’t to say that the Borowitzes couldn’t have done more to bring in more Black voices and POVs behind the scenes — the reunion special’s table-read footage shows the Black cast often surrounded by white writers, producers and crew members. But it would’ve been fascinating to get a more nuanced perspective on the dynamics in the writers room and how they interplayed with the actors’ requests. But that would’ve required bringing in viewpoints beyond the cast’s.

Ali argues lyrically for the important representation that the show offered, but it also might’ve been more interesting to get a sense of The Fresh Prince of Bel-Air’s role within the flourishing of Black sitcoms during the ‘90s, when the series overlapped with The Cosby Show, A Different World, Living Single, Martin, Family Matters, Sister, Sister and more. It’s particularly here that a scholar or a network exec’s perspective would’ve expanded the special’s examination of the show’s legacy.

But the headlines are destined to seize on the meeting between Smith and Hubert, which, despite aggressive editing, retains a raw and uneasy intensity. The actress alludes to the ways they’ve spoken unkindly toward each other in public, and we finally get an airing-out of what led to Hubert’s departure from the show that feels balanced, if also begging for more details. “I made the set very difficult for Janet,” Smith admits, and Hubert, who appears cautious of appearing unsympathetic next to one of the most famous and beloved A-listers on the planet, strives to hold her former co-star accountable with as much graciousness as possible.

“I lost everything,” she tells Smith, at a time when she had a new baby and was stuck in a “very abusive marriage.” “Calling a Black woman difficult in Hollywood is the kiss of death… and it’s hard enough being a dark-skinned Black woman in this business,” she adds. A quarter-century after it went off the air, The Fresh Prince of Bel-Air is still tackling thorny issues.