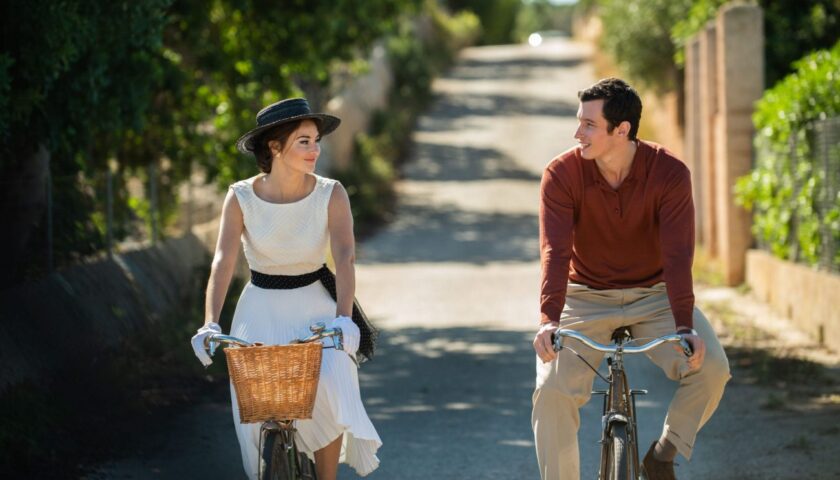 You don’t have to be a sharp-edged journalist to see the obvious connection between the apparent heroines at the heart of Augustine Frizzell’s “The Last Letter from Your Lover,” including dull-edged journalist Ellie (Felicity Jones) and glamorous stifled ’60s housewife Jennifer (Shailene Woodley). Both women have been waylaid by love gone wrong, and can only hope to find true happiness by imagining — and then seizing — a new life for themselves.

It’s certainly a sweet concept for a novel (just like the one the film is actually based on, by bestselling author Jojo Moyes), but one that never quite translates its disparate tones and stories into a cohesive cinematic experience. At best, it’s a suitable companion piece to the novel; at worst, it’s a lackluster feature bolstered only briefly by flashes of real human emotion.

But back to those different heroines. Split between two settings — and then, why not, one more — Frizzell’s film tracks the intersecting tales of Ellie and Jennifer, which are bound together by a series of wrenching love letters that captivate both of them. Jennifer was the recipient of those letters, but when we first meet her, the well-coiffed and seriously unhappy London resident doesn’t know anything about them, mostly because she’s got amnesia after a terrible car accident. As she slowly slips back into her life, complete with stiff husband Lawrence (Joe Alwyn), who can barely obscure his general air of coldness toward his ailing wife, it becomes obvious that something (or someone) else contributed to the accident that stole her memory. “You call me Larry,” he tells her, and the look of surprise on Woodley’s face implies that even her addled Jennifer is pretty sure she’s never said something so warm to such a truly cold fish.

Ellie is closer to the usual Moyes heroine, a stretched-thin modern woman with a wry sensibility and a lightly bashed-in joie de vivre (the author’s work was previously adapted into the heart-tugger “Me Before You,” complete with a zippy performance from Emilia Clarke, which would go nicely with Jones’ work here). Ellie has just been through a bad breakup, and it’s impacted every part of her life, though it mostly seems to work itself out through her choice to repeatedly engage in casual sex with nice dudes she never intends to see again. Ellie is also a journalist, the kind you’d only see on the big screen and never in an actual newsroom (she’s a features writer, but also able to write flimsy personal “opinion” pieces at whim for the apparently well-regarded, and totally fake, London Chronicle).

When Ellie discovers one of Jennifer’s letters — the same letter we’ve already seen, in another time, being tucked away by the nefarious Lawrence, far from his unsettled wife — she becomes fixated on the passion it depicts. Who, she wonders is “Jenny”? And who is the so-called “Boot” who writes of their apparent ill-fated love affair with such tenderness? Ellie must find the answers, even if it means bossily ensnaring the services of sweet archivist Rory (Nabhaan Rizwan), mostly forgetting about her current assignment, and plunging head-long into a story far more effectively rendered by Woodley and her eventual scene partner Callum Turner than by whatever weird stuff Ellie projects on to it.

The film is less interested in some of the more basic mysteries at the heart of the story — mostly, it’s a way for Ellie to show off her incredibly unprofessional journalistic chops, as she never asks the basic question, “hey, what the hell are these letters doing in our archive?” — and too often delivers its answers by way of paper-thin, strange contrivances. (Please, think kindly of the intrepid reporter who is eventually revealed as a throwaway vessel for other people’s stories.) At least Frizzell, here offering a strange followup to her raucous “Never Goin’ Back,” is adept at moving between her bickering time frames, not even missing a trick once a third is introduced. But “The Last Letter from Your Letter” is less at ease when bridging the gap between the tones of its bisected (and then trisected) tale of love gone awry.

At least there is the lush romance of Jennifer and Anthony (Turner), which is sweet, sexy, and visceral in all the ways that Ellie and Rory’s eventual bond lacks. And while it’s often rendered through lighting so fuzzy and muted that audiences will likely have to squint to obtain any sharpness (though other production choices, like for Woodley to sport perfect winged eyeliner even when she’s in bed, to everyone’s insistence on smoking like chimneys, are so grating that viewers might wish to not see them so clearly), it feels like a real love story. That might not be such a hefty ask in a film ostensibly all about romance, but as Ellie and Rory limp through their chemistry-free courtship, the actual heat generated by Woodley and Turner adds a very necessary spark to the entire film.

Jennifer’s attempts to unlock the mysteries of her life (and, of course, the accident that has so damaged it) are compellingly rendered, while Woodley and Frizzell seem to be a natural match; perhaps the filmmaker can work with the actress again in a less fussy film. The film’s script, from Nick Payne and Esta Spalding, labors to deliver both wild twists and paint-by-numbers revelations in equal measure, and while a tear-jerking final act is all but assured, little of it feels actually earned by anything that came before. Unlike that final, piercing letter, this one should have stayed on the page.