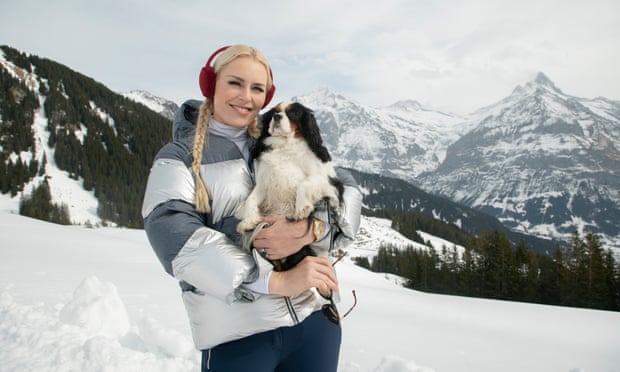 In Britain, a show about dogs and their owners is presented by someone in a good anorak, and involves half a dozen mutts and their besotted owners, who appear to have been simply the first to turn up at the application process. It involves challenges such as finding a rubber bone in a big garden or carrying a sock down a hill. Sometimes they have to jump over a stick. Sometimes “they” are the dogs, sometimes “they” are the owners. All are equally willing. The winning dog gets some really nice biscuits and its owner gets to watch the dog eating its really nice biscuits. Then everyone goes home for a cup of tea and another biscuit.Down, boy! Is it time to press paws on pet TV?Read more

In America, a show about dogs and their owners is slightly different. The Pack (Amazon Prime) comprises 10 60-minute episodes, presented by the former alpine ski racer and gold-medal Olympian Lindsey Vonn (and her King Charles spaniel Lucy). It has a dozen carefully curated (for age, ethnicity and economic background), charismatic, camera-ready owners – renamed “dog partners” for the duration. And it has a dozen dogs, who, Vonn assures us earnestly – despite one partner describing herself as the “momager” of Charlie, a schnoodle who has appeared in a number of videos and ads – “are NOT professionals. They’re regular pets”. I hope no one unleashes the IRS on Charlie.

Even leaving the vexed question of the schnoodle aside, these “regular pets” seem to have undergone weeks of formal training to make sure they are up to the challenges, which are global in scale. The show takes place in a different country almost every week. We start in LA and then jet off to Mexico, Italy, Switzerland, France, Austria, the UK and Costa Rica before making it back to the US for a finale in Utah.

Just getting to the location of the first challenge, in the city of angels, requires a helicopter lift from the freeway, followed in quick succession by a zipwire swoop down to a limo and a speedboat ride to a cruise ship. Dog safety officers are on hand at all times, and we are shown them often. Very often. And the prize? $500,000 for dog and partner, plus another $250,000 to a charity of their choice. And another $250,000 is distributed to charities they come across as they travel round the world. USA! USA! USA!

I’ve never felt so small, inadequate or oddly proud. Because while The Pack is obviously better than the typical British pet show in every conceivable way, it doesn’t work. It’s bloated: a lot of time is spent on slow-motion scenes of the dogs and people running through emblematic national scenery or joyfully burrowing/tug-of-warring/staying-then-fetching (dogs only, usually). For the most part, it is intensely boring.

Even the most devoted fan of the canine community would, I think, be hard pressed to avoid rolling their eyes as every challenge is explained in repeated and extreme detail. The slo-mo kicks in every five minutes to get us through to the next one, with Vonn no more than a serviceable presenter.

There are emotional backstories, particularly from owners who are trying to deal with bereavement or keep loneliness and depression at bay. Genuine devotion is on display everywhere you look. But although cynicism is nowhere to be seen, there remains a heartlessness to the whole shiny endeavour and an inescapable spirit of deadly competition that feels alien to the soft British animal lover. Separated by a common language isn’t the half of it.

The best bit by far is the occasional reel of outtakes, when dogs fart or sneeze in the middle of an owner’s speech to camera and everyone collapses in hysterics. I would watch 10 straight hours of these. As things stand, however, I think I shall peel off and let The Pack run on without me.