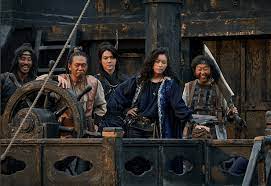 The Korean action-adventure movie The Pirates: The Last Royal Treasure dropped on Netflix on March 2, 2022. The film is a sequel to director Jeong-hoon Kim’s 2014 film The Pirates.

The film follows the story of Captain Hae-Rang and her crew as they embark on a quest that will lead them to a secret hoard of treasures.

Captain Hae-Rang is a fearless and daring captain of a pirate ship. Beautiful, talented, empathetic to her crew, and ambitious in her visions, she is determined to overcome all hurdles and lead her followers to the secret treasure of a lost kingdom, hidden across perilous waters on a dangerous island.

The movie begins with Hae-Rang’s ship crossing paths with a group of bandits led by their boss Woo Moo-chi. After some initial struggles and a lot of tension between the Captain and the Boss, the two groups eventually joined forces and set off on the quest for gold following a map that promised to lead them to the treasure.

After some double-crossings and betrayals, the Captain finally manages to pull together the group of gutsy Joseon pirates and bandits to go off on an adventure battling stormy waters, following puzzling clues, and undertaking outrageously dangerous feats to get their hands on the promised gold.

However, the search seemed more dangerous than anticipated. After hitting a few dead ends and gathering clues that would eventually lead them to their destination, the team, bound by loyalty, set off for their final destination. On the way, the pirates encounter a dangerous and ruthless rival group who are on the same mission and who would do anything to lay their hands on the treasure.

The two groups engaged in a bloody combat involving sword fights and cannons as either group tried to eliminate their competition to take the treasure home. In the middle of this, romance blossoms between the Boss and the Captain as they learn to trust each other and save each other from multiple deathly situations.

Full of battles, romance, loyalty, and betrayal, The Pirates: The Last Royal Treasure lives up to the hype. There is no dearth of heroic fight scenes in the movie, but what it lacks is a storyline. Stretched for over two hours, the movie survives on a thinly written script that seems too feigned at some point. Not a great deal happens in the film in terms of events, but what happens plenty is fight scenes peppered with romance every now and then.

The Pirates: The Last Royal Treasure has a fair bit of plot twists which can be seen coming from a mile away and nothing too surprising happens. It is the usual pirate adventure film where a group of pirates go on a quest for treasure, rivalry and tension give way to romance, and everything ends on a fairly happy note.

Coming to the visuals, the CGI in some places was really poor considering one would expect better visuals in an action-adventure film. The penguins seemed more made up than in an animated movie, and the fury of nature portrayed in the film evokes no sense of excitement in the viewer. Overall, the visuals are banal and disappointing.

Despite the poorly written script, The Pirates: The Last Royal Treasure delivers a fair share of humor. Physical comedy and some of the comic dialogs are worth appreciating and were a welcome relief in the long drawn out threadbare plotline.