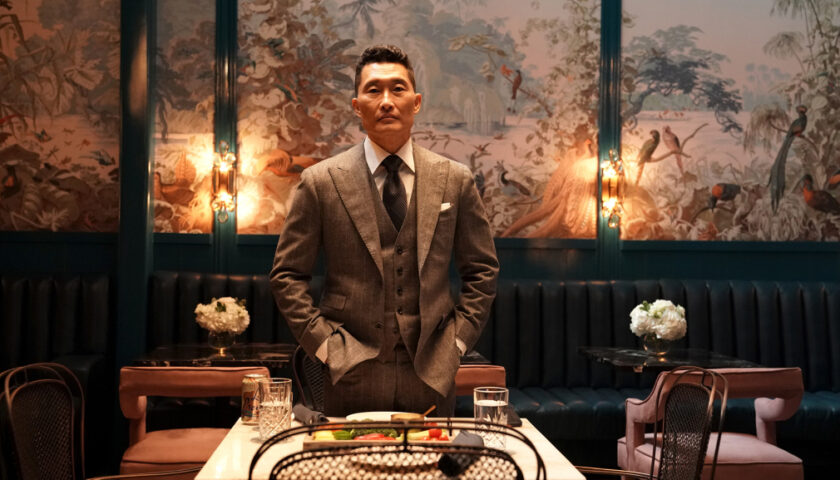 Ten minutes into B.J. Novak’s The Premise, a deeply annoying white man throws out a suggestion: “Maybe we could all just play devil’s advocate for a second?” In truth, though, he needn’t have bothered. He’s already a character on a series whose entire reason for being is just playing devil’s advocate for a second, doling out bite-size stories meant to illustrate modern moral dilemmas.

But as with most endeavors involving the phrase “devil’s advocate,” the hypothetical contortions get old quick. The half-hour anthology series suffers from an inability to take most of its own thought exercises all that seriously, resulting in logical inconsistencies, tonal unevenness and no small amount of smugness. It’s quick to raise hot-button topics like social media, social justice, gun control, bullying and fame. But in the five episodes sent to critics, The Premise seems to prefer snarking from the sidelines to getting its hands dirty digging in.

This becomes clear right away with the first episode, which puts the series’ most consistent bad habits on display. “Social Justice Sex Tape” takes a potentially interesting idea — a would-be racial justice ally is forced to decide what he’s willing to sacrifice in order to live up to his professed morals — and spins it into a goof about a loser named Ethan (Ben Platt) and his embarrassing sex tape. That it takes several dubious leaps of logic to get there undermines what would seem to be the point of the show. What’s the fun in picking apart a theoretical conundrum if the conundrum feels impossible to buy in the first place?

The episode spends more time snickering at Ethan’s humiliation than it does exploring the real-life complications that might arise from his predicament (like the ethics of leaking a sex tape without consent), or the more serious issues that put him there in the first place (like the fact that this tape represents the defense’s only hope of proving the cops have falsely accused a Black father and activist, played by Jermaine Fowler). Then, as if realizing too late that it’s wasted most of its run time, it caps off with some hasty messaging about whether “these videos have to be more obscene every time.” Because both sex tapes and videos of police brutality are obscene — get it?

The Premise fares a bit better with episodes that dial down the smirking. Episode two, about a grieving father (Jon Bernthal) who joins a gun rights lobbying organization shortly after the death of his daughter in a school shooting, is the only installment played completely straight, and it’s all the better for it. Bernthal plays Chase with the wide-eyed blankness of a man who’s using every ounce of energy he has simply to keep himself together. The mystery of whether he’s about to explode in sadness or rage (which Novak, who wrote and directed the episode, capably milks for tension) is almost interesting enough to make you overlook the reality that Chase remains more of a plot machine than an actual character.

It’s no coincidence that the most compelling installment of the bunch is the only one that seems created from an inside perspective — episode four, which centers on a beloved influencer named Allegra (a perfectly cast Lola Kirke) who starts to wonder if her most persistent hater has a point. Writers Jia Tolentino and Novak nail the neediness of Allegra’s exchanges with the commenter, which, heard in voiceover, take on the intimacy of an internal monologue. The episode reflects the oppressive positivity of certain corners of digital culture, where every social media post garners likes, every self-help book reassures readers they’re already perfect, and every friendship is built on an ever-escalating string of empty compliments. If the story does not, in the end, offer much of a solution, at least it accurately pinpoints a specific modern malaise.

Too often, though, The Premise not only struggles to get its point across, but it also barely seems to know what it wants to say in the first place. When, in episode three, a high school rebel (Kaitlyn Dever) praises a pop star (Lucas Hedges) for destigmatizing sex work because he promised to sleep with whichever student earns the highest grades, are we meant to take her words at face value, understand them as a performance for the teacher’s benefit, or dismiss them as misguided bullshit? The purpose of episode five — about a successful businessman (Daniel Dae Kim) who challenges his now-struggling childhood bully (Eric Lange, rising above the material) to design a butt plug worth investing in — is unclear, beyond the excuse is provides to titter, once again, about sex.

Though The Premise‘s anthology structure makes for easy comparisons to shows like Black Mirror and Modern Love, its true spiritual predecessor feels like something altogether humbler: These episodes are the half-drunk conversations you have at parties, trying to prove a point between friends with loopy hypotheticals — only they’ve been turned into full-fledged Hollywood projects with tasteful production values and big-name celebrities. From the perspective of a three-martini night, that might sound just grand. But some drunken notions are better left at the bar, far away from the cold light of day.