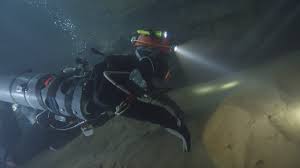 Taken together, boundless courage, physical stamina and emotional resilience form the magnetic core of co-directors E. Chai Vasarhelyi and Jimmy Chin’s nonfiction oeuvre. The duo behind Oscar-winning nail-biter “Free Solo” naturally gravitate toward real-life you-have-to-see-it-to-believe-it tales, extracting from them a great deal more than beautifully photographed and entertaining accounts of perseverance and survival. Far greater than mere extreme sports docs, their movies raise philosophical queries about life and the universe, bringing an existential edge to the challenges they capture.

Still, no risk that Chin and Vasarhelyi have depicted thus far has been more significant or more unreservedly worth taking than the one they chart in “The Rescue,” a stunning documentary of bone-deep moral resonance and cinematic mastery that deserves to be experienced on the big screen. The extraordinary story they tell this time takes us to the summer of 2018, when the Wild Boar soccer team — a dozen young boys and their coach — got trapped in Tham Luang, an extensive and labyrinthine cave in Northern Thailand, drawing international concern and compassion their way during the two long weeks they were missing.

On the tragic day itself, the kids were on a leisurely yet poorly timed outing after a practice session, unaware of the approaching monsoon that would eventually block their exit, pushing them deeper into the dark ends of a rapidly flooding cave. Joined by thousands of concerned citizens and multifarious experts, an epic and terrifying battle of constantly changing unknowns had to be won to save them.

Through “The Rescue,” Chin and Vasarhelyi generously assemble the pieces of the puzzle that adds up to this unbelievable operation. The result is a rousing film that celebrates humanity at its most selfless and ethically motivated, one that is guided by sharp directorial instincts and dextrous editing by Bob Eisenhardt.

Worth noting: Neither the seasoned mountain climber Chin nor the experienced open-water diver Vasarhelyi were present during this mission. Hence, the co-directors lacked their own original footage of the key moments of the operation, embarking on a different kind of storytelling challenge from “Meru” and “Free Solo.” In other words, “The Rescue” relied on others’ footage, plus generous talking-head interviews (filmed mostly virtually due to pandemic restrictions) for physical and dramatic context.

What’s truly astonishing here is the kind of crystal clarity the duo achieves in muddy waters, considering the massive amount of secondhand, jigsaw-like and never-before-seen footage and perspectives they were drawing from. With studious patience and focus — and some help from a number of powerful reenactments and lucidly designed computer graphics — the two construct the terrorizing happenings developing in tunnels and claustrophobic underground chambers with utmost, well-researched precision, giving the viewer a complete and thrilling understanding of the geography with all the immense stakes buried within its vast scale.

In that regard, it’s truly commendable how balanced “The Rescue” feels from a narrative standpoint: We get to follow and hear from Thai Navy SEALs, U.S. Special Forces, British cave divers, Australian medical experts and a Thai nurse named “Amp” Bangngoen (with a crucial role as a translator), fully grasping the gravity of the situation handled by a crowded group of colorful personalities. The cave divers John Volanthen, Rick Stanton and Dr. Richard “Harry” Harris leave the most memorable impressions alongside Amp. It’s through these figures that we get to understand what motivates a fearless cave diver — no, they’re not crazy — and Chin and Vasarhelyi, both experienced in either taking part in or filming extreme sports, have fun with this inquiry.

One of them defines his dangerous, potentially fatal hobby as “two parts ego, one part curiosity and one part a need to prove yourself.” It quickly becomes clear that a past of nerdy unpopularity in their youth is shared by all these heroes, a detail “The Rescue” briefly touches upon, enough to get the viewer hooked on these former underdogs. Ever-interested in human relationships (as they proved with the unique love story at the center of “Free Solo”), the co-directors can’t help but spotlight some romance in “The Rescue,” braiding in a courtship between two of the characters.

Naturally, the rescue itself is the main attraction, mostly occurring through an awe-inspiring final act. As the world watches and millions of gallons of water are drained from the caves to keep the kids from drowning, the divers ultimately decide to risk sedating and transporting the kids unconscious through the long tunnel, too precarious and panic-inducing even for an experienced cave diver to handle. At one point, a rescuer loses his rope — the most important asset of a cave diver that connects him to safety. At another, the drugs wear off, and proves insufficient.

It’s truly breathtaking stuff, watching a massive group of diverse professionals set all notions of fear and self-interest aside and unite around a common goal. In today’s increasingly individualistic world divided by superficial differences, witnessing this profound miracle feels like receiving an overdue supply of oxygen.