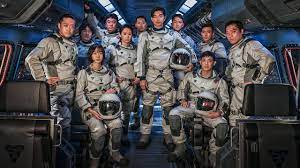 In a near-future version of the earth, worldwide desertification has caused governments to ration water. The higher level you are, the more water you get.

Biochemist Dr. Song Ji-an (Bae Doona) is approached by the space administration to be a part of a new moon mission, five years after the disaster at the Balhe Lunar Research Station Left over 100 crew members dead, including her sister. As part of the SAA’s recompense to her, she’s given a gold card that allows her to get as much water as she wants. Understandably, Dr. Song is reluctant to do a mission… until she’s told that she’s going to Balhe.

She meets the rest of the crew, beginning with captain Han Yoon-jae (Gong Yoo). Another crew member, Ryoo Tae-seok (Lee Joon) is a well known officer whose good reputation precedes him. She also meets the ship’s doctor, Hong Ga-young (Kim Sun-young), who jokes that she likes a good looking crew so she has “eye candy” to look at.

Their mission is to go to Balhe and retrieve a sample before the station itself is closed for good. No one, including the administrators, have been told what the sample is, just that it needs careful handling and they only have 24 hours to find it. That, of course, triggers a lot of questions from Dr. Song. Captain Han, however, doesn’t question it; a mission is a mission and his orders are his orders.

Right before takeoff, the crew learns that they’re getting a new co-pilot. The liftoff goes well, but as they get closer to the moon, the brackets that attach their shuttle to the main rockets starts to give way. Han makes a decision to land sooner than they hoped, and a crash landing brings the shuttle on the edge of a cliff, tipping over the edge while upside down. Everyone manages to escape to the surface before the shuttle tumbles off the cliff, but the one crew member who knows the space station well has punctured a lung.

They’re several kilometers away, and the oxygen in their suits will barely be enough. They get waylaid when the injured crew member aspirates and dies, but not before warning the captain about the water at the station. The crew make it to Balhe, and none too soon; some are running out of oxygen as they manage to get the doors open.

We were impressed with The Silent Sea, written by Park Eun-kyo and directed by Choi Hang-yong, mainly because it does a good job of combining its VFX with a tightly-written story that doesn’t strain plausibility.

There’s just enough backstory in the first episode to show viewers what’s at stake. Even though we don’t know what the sample is that the crew is tasked to get, we do know that the lack of water on the planet is an ongoing and urgent state for humanity, to the point where there is a bureau devoted to the species’ survival. We don’t know a lot about the accident on Balhe, but we know that Dr. Song is more or less bitter about it.

So what we have is a thriller, with a mystery mixed in, plus a good start with the backstory of Dr. Song at the very least. We anticipate that, as further episodes show the crew exploring the station looking for the sample, trying to figure out how in the hell they’re going to get home, they’ll find more dangers in their way. But the mystery behind just what the sample is and who is ordering the agency to risk a crew’s lives to go in and find it is intriguing enough to push the story forward and keep viewers intrigued.

One thing that’s for sure is that the first episode didn’t move slow. Yes, there were a bunch of VFX-heavy sequences, especially during the crew’s attempt to get out of the shuttle before it falls, but they’re integral to the story. When they’re walking on the surface to get to Balhe, there was a slight feeling that it looked less like the moon and more like a soundstage, but that’s more because of some of the light that shined on each crew member than anything else. There’s always going to be an element of surrealism in a show like this, and we can handle that in the case of the scenes on the surface.